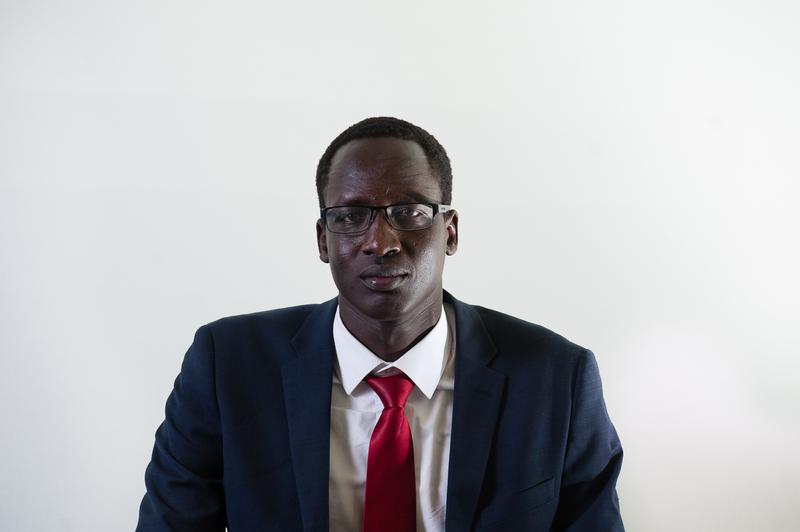 Midway through his term, AMS VP Finance Kuol Akuechbeny says he’s taking a “so far, so good” view on the progress towards his executive goals. File Patrick Gillin

Midway through his term, AMS VP Finance Kuol Akuechbeny says he’s taking a “so far, so good” view on the progress towards his executive goals.

Akuechbeny ran on a platform of club engagement and consultation, as well as streamlining financial operations for constituencies. He also pledged a full transition from paper to electronic reimbursement for club expenses and promised to ensure the AMS’s investment portfolio aligns with the student union’s moral values.

Akuechbeny said that while the VP Finance Caucus’s terms of reference hadn’t been formally created by the end of November, an agreement had been reached on meeting frequency, duration and content.

The agreement proposes quarterly meetings to better align with the availability of financial information. The structure also reduces time commitments for participants, as some student groups have expressed concerns about the added work financial reporting requires of their limited volunteer resources.

Akuechbeny highlighted the credit card program’s expansion, with 60 currently active credit cards – up from the 20 that were active earlier this year. He added that a significant number of applications are still being processed.

“So what we need to do now is look around at who meets the criteria, and then ranking them by their need,” he said, explaining that applications with a larger proven need over the past three fiscal years are getting prioritized.

Although a system developed by RBC was supposed to be delivered by the end of the summer, it became apparent in July that the system’s security had a small but dangerous chance of being compromised.

“We decided not to take chances at any cost, so we abandoned that system … we asked RBC to go back to the drawing board and give us another,” Akuechbeny said.

Another challenge is making the new online transfer system compatible with Microsoft Dynamics, the AMS’s internal software. There are plans to test the system’s functionality in March, but even then it won’t be fully operational because of the need to ensure compatibility across more than a decade’s worth of financial data.

Akuechbeny said the goal has turned into a two-year project. “What I will do is update whoever comes to my role next and say ‘this is where we have been, we tested it out, pick up from here and see what can be done.’”

The AMS Council approved these changes in July, raising the caps for all AMS funding by 30 per cent on average to a maximum of 75 per cent of event expenses.

“So we basically pay a little bit more … which is something really good and that gives people the opportunity to have enough money to actually focus on the project and have it completed instead of leaving it halfway because they ran out of money,” Akuechbeny said, adding that the Club Benefit Fund is on track to surpass its usage goal just based on this term.

Akuechbeny said that the funding available from the AMS Student Initiative Fund has been doubled and that its usage is on track to surpass 30 per cent of the available annual funding.

Improve the use of AMS’s online event and ticket organizer, Showpass, through lower transaction fees and a lengthier contract

In a November 30 interview, Akuechbeny said the AMS was in the final stages of negotiating with Showpass to sign a four-year contract that includes a 3.5 per cent transaction fee and substantial customer support services. This fee would be significantly below the benchmark rate set in the executive goals, which called for anything below 7.5 per cent in a contract with a duration of three to five years.

He said the AMS spent around $1,000 buying a number of debit-enabled Square machines, which have been made available to AMS organizations’ treasurers for sign-out.

Improve the process for student group treasurers to access account details, including exploring an upgrade or replacement for SharePoint

Akuechbeny explained that the plan to replace SharePoint hasn’t been established because some of the issues with accessing account details come directly from Microsoft Dynamics and not from SharePoint.

“As long as we’re using Dynamics, we cannot replace SharePoint,” he said. “This is not yet the goal, but that should be the goal over the next two years.”

In the meantime, he stressed his office’s emphasis on being active and responsive in providing account information for treasurers.

Implement the split investment policy, aiming for a 70 per cent fixed income and 30 per cent equity investment split to target a 5.5 per cent annual return

The VP Finance confirmed the investment policy has been implemented — albeit with a slight modification. Instead of a 70 per cent fixed income and 30 per cent equity investment mix, the current policy dictates a 65/35 per cent split.

Akuechbeny said the higher proportion of equity investments allows the AMS’s fund managers more freedom to chase higher returns. But he also specified that after reviewing the AMS’s historical investment performance, the target annual return was adjusted to a range of 3 to 4 per cent in order to be more realistic, since the highest return that’s ever been achieved is 2.3 per cent.

Akuechbeny said the meetings with the AMS’s fund managers have been taking place, and stressed that his office is ensuring that the fossil fuel divestment policy approved by the AMS Council in August is respected “100 per cent” by the student union’s investment managers.

Facing pushback from some student groups on the introduction of quarterly financial report requirements, Akuechbeny has now opted for a less frequent structure. The agreement reached now has most groups presenting reports biannually, with five of them presenting annual reports due to their budgeting processes.

Akuechbeny expects that this information will allow people to evaluate whether or not students fees are being underutilized and to provide feedback accordingly so that his office can then make recommendations to Council.

“If they think their money is being well spent, well good. If they don’t, then they will let us know,” he said. “If you pay money, you need to know how it is spent.”