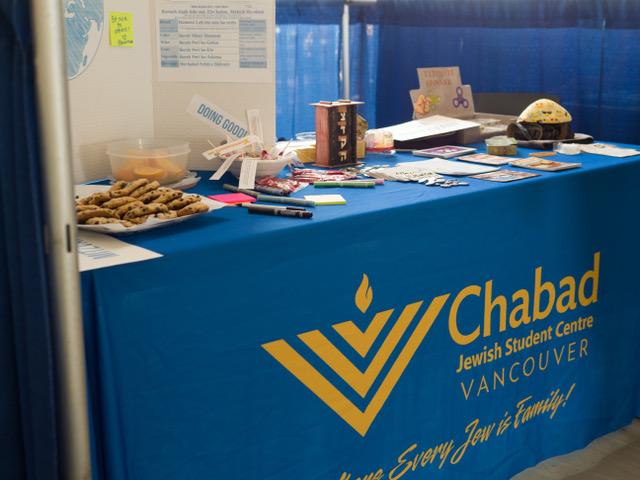 The Chabad Jewish Student Centre (CJSC) and Hillel BC collaboratively set up a “Mitzvah Marathon” booth in the Nest yesterday, as a response to recent pro-Nazi incidents on campus.

On Remembrance Day, posters promoting Nazism were discovered on all entrances of the War Memorial Gym, site of UBC’s annual Remembrance Day ceremony.

Only two days earlier, the words “Heil Hitler” and a swastika were found written on a chalkboard at the Forestry Sciences Centre (FSC). Another similar incident also happened early November.

The event was therefore to show “a sense of pride” for the Jewish community and to show that they were “not going to be intimidated by ... hateful speech,” according to Rabbi Phillip Bregman, executive director of Hillel BC.

The event itself revolved around the concept of mitzvah, which means “good deed.”

Students were given the choice to either come up with their own mitzvah resolutions or to be assigned one of forty five pre-made mitzvahs, such as “making someone smile,” “opening doors for others” and “sharing knowledge.”

“Judaism has a very strong thought that if a person increases in good deeds, he ends up adding much light to the world — the more good these people do, the more the world becomes a better place,” said Rabbi Chalom Loeub, co-director of the CJSC.

“In the light of all this that’s been happening in the past two weeks, I figured the only way to combat negativity is to add a huge dose of positivity.”

Loeub also emphasized that the event was not exclusive to Jewish students.

According to Bregman, the event also emphasizes action.

“Life is filled with all sorts of talk, but it’s a question of what we do in life that is ultimately more significant,” said Bregman. “I want to quote from an 18th century Irish politician Edmund Burke: ‘all that’s necessary for evil to succeed is for good people to do nothing.’”

He further believes that there is a lot more that should be done by UBC to promote “more real, honest to goodness understanding.”

“We have to figure out a way of changing the culture to get people to ... have more personal interaction,” said Bregman. “Because when you do that, there’s a greater likelihood that levels of anger, hatred and mistrust will not be the same as when you don’t know somebody.”

This article has been updated to clarify Rabbi Chalom Loeub’s quote and correct the spelling of his name. The Ubyssey regrets this error.