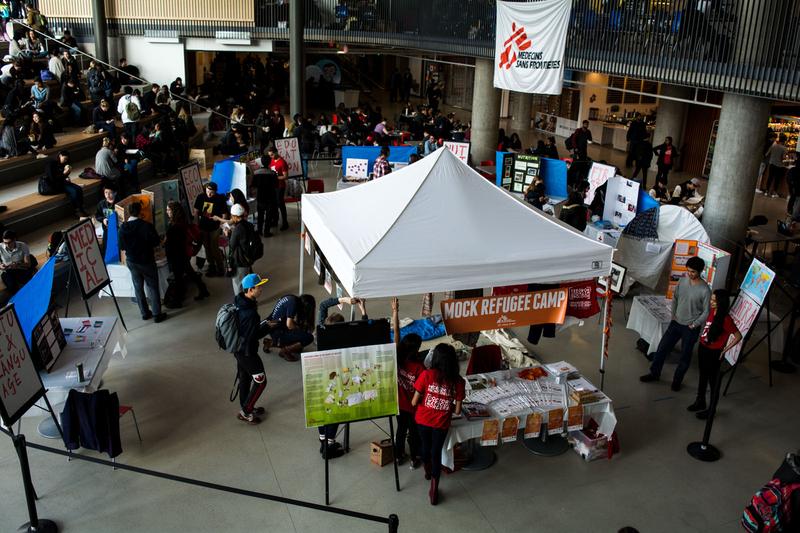 Friends of Médecin Sans Frontières — or Doctors Without Borders, as it is better known in English — at UBC put on a mock refugee camp yesterday to demonstrate the needs of refugees and the challenges they face as they are displaced from their home country.

The mock camp was originally conceived by Friends of Médecin Sans Frontières (FoMSF) members and event organizers Vivian Huang and Gunjan Mhapankar in an effort to raise awareness about the global refugee crisis. Since its inception, the event expanded into a large-scale collaboration across the UBC community.

“We wanted to show students that the refugee crisis is much more than people leaving their homes and migrating to a different country,” said Huang, a second-year science student. “[Refugees] have to deal with all sorts of different problems, physically and psychologically, and once they reach the destination, they encounter ... different kinds of challenges.”

Set up in the Nest, the interactive camp featured a total of seven stations to provide students with information and visual representations of the hardships refugees experience, as well as the unique needs of refugees when they reach their destination.

Despite their mission of increasing student awareness about the global refugee crisis, Huang and Mhapankar acknowledged the controversial issues surrounding the idea of a mock refugee camp. They acknowledged it could be interpreted as an insensitive way of trivializing or appropriating refugees’ experiences.

“There were definitely concerns at the beginning. We wanted to make the event a mock refugee camp, but not a mockery of refugee camps or to make it seem like we were making light of their experiences. Of course, we recognize that we can’t exactly simulate those experiences, so we are just trying to provide a glimpse of the lives of refugees,” said Mhapankar, noting that what was represented was based on testimonials from refugees.

“We’re just trying our best as students who are really passionate about this idea to keep it as sensitive ... [and] educational as possible,” said Mhapankar.

Each of the seven stations were manned by various clubs with students from groups such as the Red Cross Club, Engineers without Borders and Universities Allied for Essential Medicines, as well as volunteers from FoMSF.

As soon as they arrived at the registration station, students were given a “passport” with a slightly modified refugee’s story, which would direct them to different stations depending on the needs of the individual.

“We thought that passports would be a good way to hear about one refugee’s specific story from different geographical areas, backgrounds, ethnicities and experiences to identify the needs of that person and learn more about those needs and how they can be met. So at the end of the day, if anything, you’re going to remember that story,” said Mhapankar.