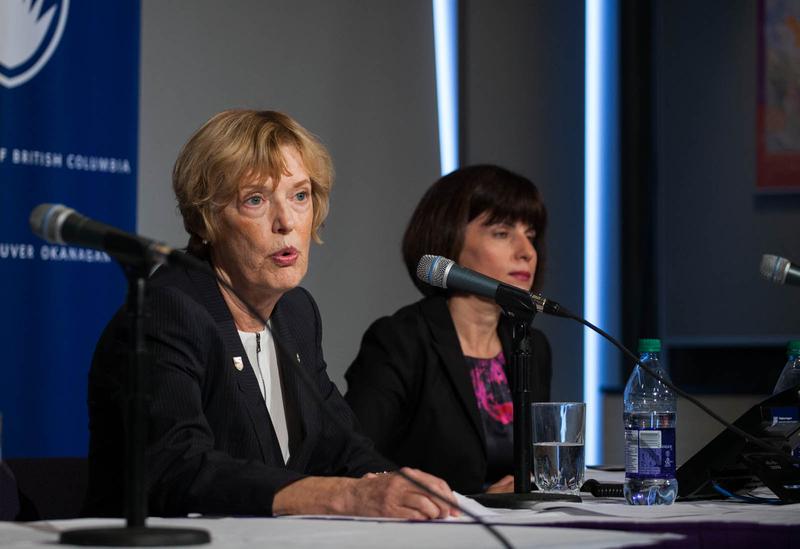 Martha Piper spoke at a press conference about the report. Neither John Montalbano nor Lynn Smith were there. Photo Will McDonald / The Ubyssey

Former Board of Governors chair John Montalbano did not infringe on the academic freedom of Dr. Jennifer Berdahl, according to the fact-finding investigation results released today.

The process agreed upon by the university and the Faculty found that although UBC failed to protect and support the academic freedom of Berdhal, who holds the position of the Montalbano Professor of Leadership Studies at the Sauder Business School, “Mr. Montalbano, on his own, did not infringe on any provision of the of the Collective Agreement.”

Despite this finding, Montalbano has resigned permanently from being chair of the Board.

Montalbano was accused of breaching academic freedoms just days before the beginning of UBC’s centennial school year. The result was mass media coverage, Montalbano’s temporary resignation and an investigation into the claims.

Today, that investigation yielded the final verdict on whether the university believes the allegations were justified. According to Justice Lynn Smith, who lead the fact-finding process, Montalbano did not breach academic freedom when he called Berdahl to discuss a blog post she had written.

It was only a couple of weeks after Arvind Gupta unexpectedly resigned from his position as UBC president. Berdahl, whose professorship is made possible by Montalbano’s $2 million donation to the Sauder, had suggested in a blog post that institutionalized ideas about race and other aesthetic features played a part in his resignation.

Montalbano later called Berdahl at home and “expressed [his] concern that [her] blog had the potential to damage UBC based on its assertions,” Montalbano told The Ubyssey in an interview in August.

Although Montalbano claimed that his phone call was an effort to learn from Berdahl, whose area of research is how ideas of race and gender impact high levels of leadership, a later post by Berdahl said that Montalbano had suggested the post impacted her academic credibility.

This announcement comes on the heels of the news that Block Party is in jeopardy after the university refused to grant the AMS a permit to use Thunderbird Stadium and that international student tuition will be raised close to 50 per cent over the next three years.