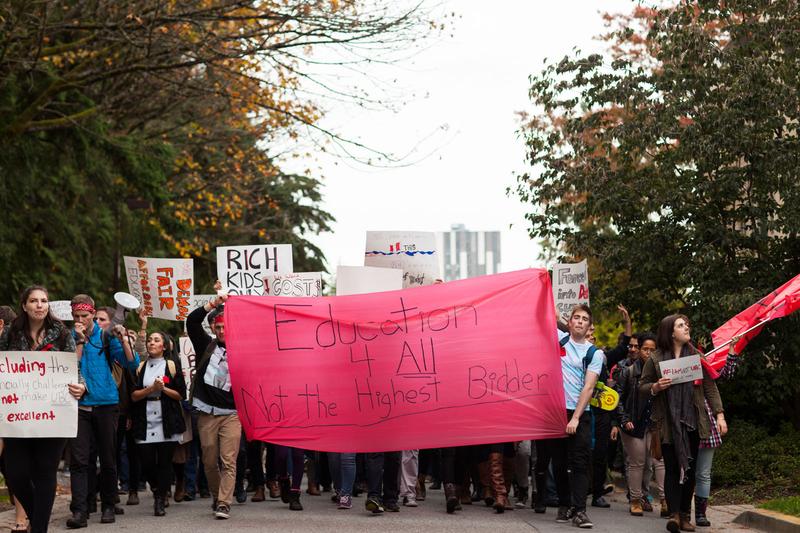 More UBC Board of Governors members are pushing back against the university’s annual tuition and fee increases, marking a change from an earlier trend of “not thinking too hard” about them.

At the November 26 joint meeting between the Board’s Finance committee and Learning & Research committee, 6 out of 16 governors voted against raising domestic tuition by two per cent — the legal cap in BC.

Gattinger, Fashanu and Menzies also voted against upping international tuition and fees by two to four per cent, depending on the area of study.

UBCV student member Jeanie Malone, who is not a member of these committees, said she will vote against domestic and international increases at the general Board meeting on December 4.

Out of 1357 valid responses from students, 85 per cent of them opposes the proposed increases. Screenshot UBC

Besides the votes, student groups have also mobilized to oppose tuition increase this year.

In early November, the AMS announced that it opposes all proposed increases in a submission to the Board, breaking from its usual advocacy stance, which is to only advocate against raises that are beyond the domestic cap.

The society attributed the decision to a “lack of effort” in addressing student feedback to the increases and the absence of budget models and a long-term enrolment plan during the consultation period.

“I encourage you to take into consideration the financial realities of not only the institution, but of those that UBC exists to serve: the students,” it reads.

Board student members also drafted their own statement that was read by Gattinger at the meeting. It outlines five arguments against the proposed tuition and fees increases, many of which reflect the AMS’s position.

“Firstly, we do not believe there has been a sufficient case built that these increases are necessary,” reads one argument in the statement.

“As Governors, we understand the need to keep up with inflationary pressures, and unionized pay increases. However, we have not — as we have requested throughout this process as early as May — been shown what the alternative will be.”

Strongly support student position against tuition increases - also find that there should “innovative” uses of endowment revenue to reduce need for tuition increase and at same time UBC should take a leadership role with prov gov’t to change the funding model for post-secondary.

Menzies agreed, stressing the need to look for different revenue streams instead of relying on tuition and cost-cutting, repeating a sentiment he expressed at last year’s consultation.

“You live in this environment where everyone’s talking about innovation, creativity and finding novel fixes, and they’ve presented the most mundane, boring, old fashioned approach: jack up the price, the market will bear,” said Menzies in a January 2018 interview with The Ubyssey.

In his presentation to the Board, UBC VP Academic and Provost Andrew Szeri said the university is facing rising cost pressures due to factors including inflation and the implementation of a major system upgrade program.

VP Finance Peter Smailes added that 60 per cent of the university’s costs are salaries, but his office plans to explore how UBC can be more efficient following the upgrade program.

This financial pressure is even more acute for the Okanagan campus, said UBCO Deputy Vice-Chancellor and Principal Deborah Buszard.

She raised concerns about UBCO’s financial stability if increases are not approved, stressing that UBCO has few additional revenue sources beyond its operating grant and tuition.

If approved, the increases would create around $4 million in new revenue for UBCO, of which $1.4 million would go toward the Excellence Fund, $1.2 million to the faculties, $1 million to central allocations and $0.4 million toward debt and financial aid.

Klironomos acknowledged UBCO’s issues, but noted that they are structural and that the fix shouldn’t be “just on the back of students.”

Szeri responded that UBC has “dramatically increased” the amount of student and also gives financial support to international students — a practice that he said is “unheard” of in Canada.

Besides the financial discussion, UBC interim VP Students Andrew Parr added the university will implement a more proactive response process to student feedback — addressing one of the student groups’ concerns — and will consult student leaders about the allocations of the new revenue.

In the end, the Finance and Learning & Research committees approved both motions to increase domestic and international tuition and fees — albeit with smaller majorities than last year’s.

The vote will come up for a final time at the full Board meeting on December 4.