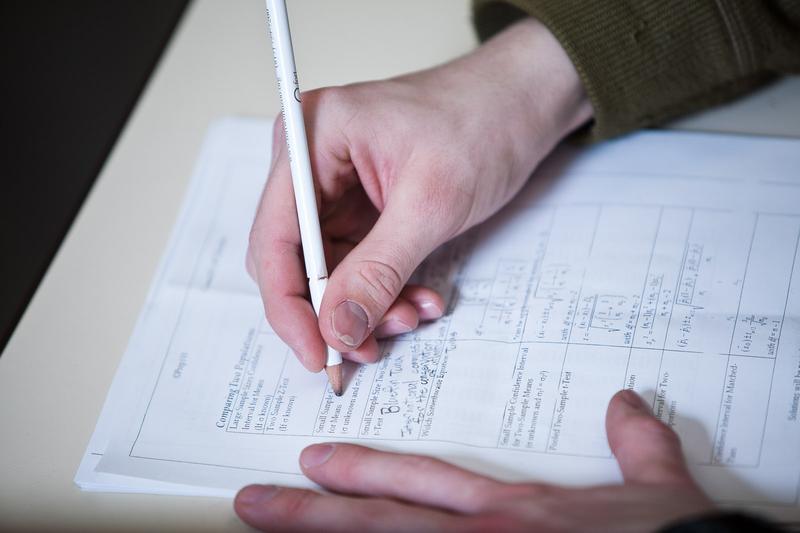 In two emails posted to Reddit, Dr. Tamara Freeman and Dr. Edward Neeland, both associate professors in chemistry, wrote to students in their classes about suspected cheating on their final exams.

Freeman, who teaches CHEM 111, wrote that it had become clear that some students “did not take their commitment to academic integrity seriously.”

“After a term in which I have offered leniency in exam deadlines and ‘rules,’ I feel that I have been taken advantage of and have had my trust broken,” she wrote.

Freeman said she would look more favourably on those who came forward with a full explanation of what happened. 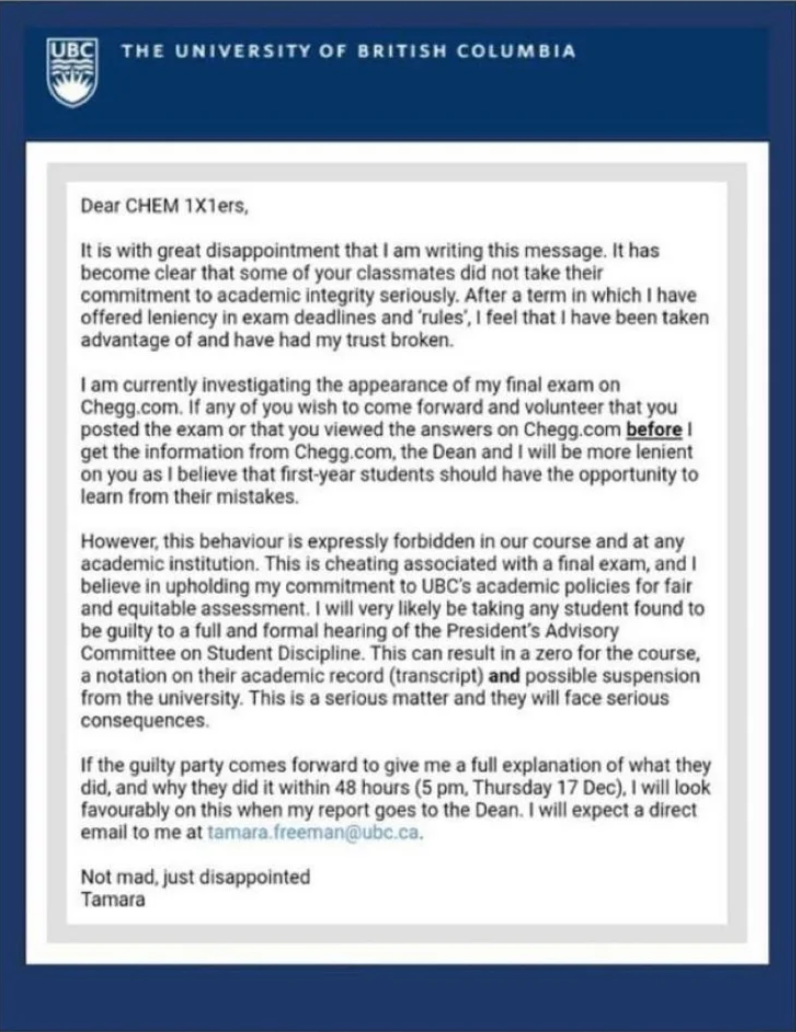 Neeland, who teaches CHEM 203, wrote in an email that a number of students were caught using Chegg, a homework-sharing website where users upload assignments and Chegg employees post solutions, to answer questions on their final exams. He said that those students have received a zero and may face further penalties from the dean, adding that the information to find the students who participated was supplied by Chegg.

“I have no words for my disappointment,” Neeland wrote in the email. He wrote he will be taking measures in CHEM 204 to combat further cheating. 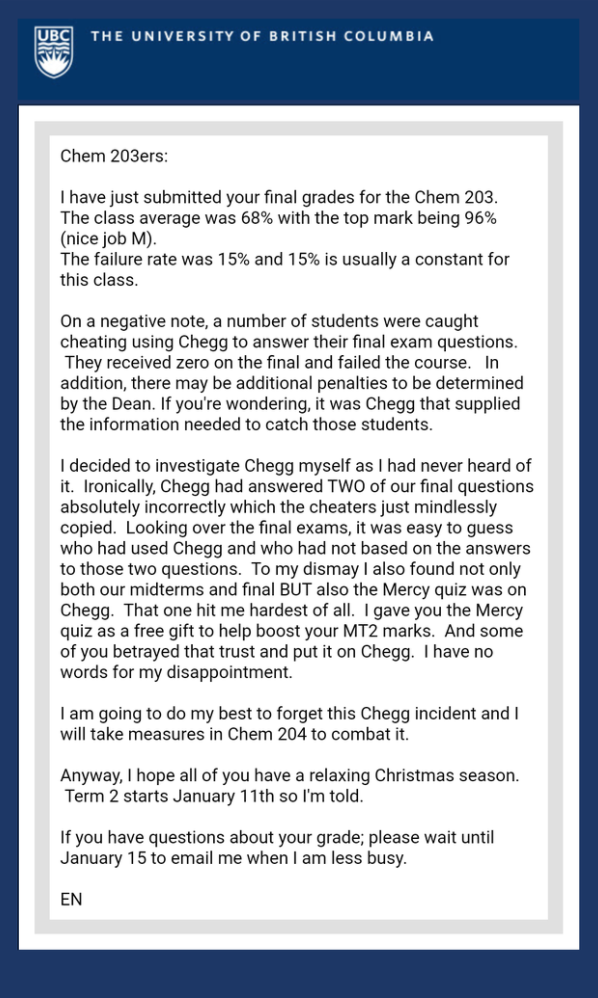 Investigations underway, with help from Chegg

Matthew Ramsey, UBC Media Relations director of university affairs, said that investigations are underway for both cases, but said it was too early to know how many students have been accused.

UBC investigates all allegations of academic misconduct, beginning at the faculty level with the possibility of escalation to the president’s committee. Disciplinary measures range from a letter of reprimand to expulsion.

Ramsey said the university does work with Chegg in these investigations when the site is involved.

She added that the site expects users to abide by an honour code not to cheat, and will address violations of that code by giving written warnings or banning users.

If contacted by an instructor, the service said it will make an effort to remove any exam questions or copyrighted materials and provide user information to the instructor under Chegg’s privacy policy.

“Even with all these measures, we fully accept there are genuine concerns, among some academics and beyond, that a small number of Chegg users attempt to misuse our service, and other similar platforms, especially during lockdown where students are being assessed in a home environment,” Batiste said.

Ramsey said that both the university and faculty members were disappointed with these students’ behaviour.

This isn’t the first time

These incidents come following a cheating scandal in MATH 100 at UBC Vancouver, where over 100 students reportedly cheated on a midterm.

According to a May 2020 survey conducted by Wiley, 93 per cent of instructors surveyed believed students would be more likely to cheat in an online setting, compared to in person.

While cheating may have increased during the pandemic, there isn’t any hard data to prove that yet, David Rettinger, a professor of psychology and director of academic integrity programs at the University of Mary Washington told Chronicle of Higher Education in October. At UBC, no such data is available.

AMS VP Academic and University Affairs Georgia Yee said that stress and desperation are usually the root causes of cheating when interviewed in November about the MATH 100 incident. She said the university should work to support student mental health to combat this.

“When approaching academic misconduct, I think it is really vital to be compassionate,” Yee said.

Ramsey said that UBC is a globally ranked university and that students should hold themselves to a high standard.

“The university is acutely aware of the stresses and strains that students are under, but taking the route towards academic misconduct is not a good call,” he said.