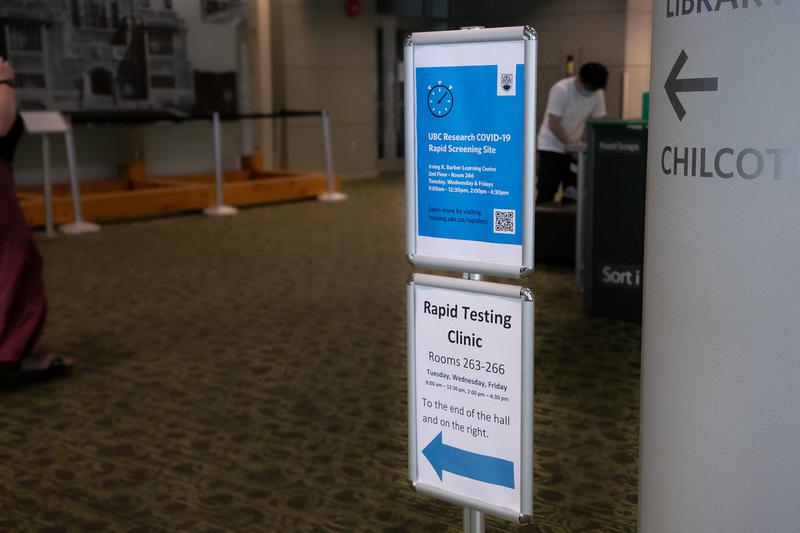 Update at 5:28 p.m. on Saturday, December 18, 2021: One volunteer at the Ponderosa clinic, who asked not to be named out of concern for their job, said that tests normally aren’t administered over the weekends, but that UBC’s announcement on Wednesday led students to believe the clinic would remain open that weekend. After being notified of a line-up of students waiting for tests outside Ponderosa, volunteers asked UBC if it would be willing to let them distribute tests. After receiving the university’s permission, the clinic had a limited opening from 1 p.m. to 5 p.m. on Saturday. UBC Media Relations could not be reached for comment.

Update at 5:56 p.m. on Saturday, December 18, 2021: In an email to arts students sent around 5:15 p.m. on Saturday evening, Arts Dean Gage Averill said instructors were informed yesterday that any remaining in-person exams can be moved “to an online exam or other form of assessment.” Averill said instructors would reach out to students directly about any changes. He added that exams which “must occur in person” will take place in classrooms that “have been tested this past week for safety” and have sufficient social-distancing capacity and ventilation.

President Santa Ono announced that UBC will be expanding its COVID-19 testing and reaffirmed that exams will continue in person in an update earlier this afternoon.

According to the update, the university will temporarily expand its rapid testing program to asymptomatic fully-vaccinated students living in residence starting tomorrow before offering PCR testing for symptomatic community members at the Vancouver campus in January.

The rapid testing expansion will last between December 15–22 and January 4–7.

“These measures will add a layer of protection and reassurance to our existing Rapid Testing Program and against potential transmission of SARS-CoV-2, the virus that causes COVID-19,” Ono’s message reads.

The announcement comes after students, faculty and staff have been voicing concern with the lack of nearby COVID-19 testing for symptomatic people for over a year and a half. Before, students had to travel at least 50 minutes by bus to the nearest testing site, while some turned to the Urgent Care Centre on campus — which is discouraged by Vancouver Coastal Health (VCH).

Although UBC and the School of Nursing both operated on-campus rapid testing sites — the latter closed earlier this fall for unspecified reasons — a symptomatic testing seemed unlikely given VCH’s refusal to set up such a site, until now.

Ono also reaffirmed that exams will be held in person as scheduled.

“We have been assured by public health experts at Vancouver Coastal Health and Interior Health that it is safe for UBC to hold in-person exams on both campuses, given the control measures that are in place,” he wrote in the broadcast.

VCH sent out an exposure notice to Totem Park residents on December 10, sparking online speculation of a significant outbreak. But Ono said the risk of transmission in Totem Park is low.

“We have been assured by Vancouver Coastal Health that the number of cases at Totem is extremely low – so low in fact that the university cannot, for privacy reasons, disclose it, as doing so might identify the students affected,” he wrote.

UBC has seen consistently low COVID-19 case numbers over the term. The UBC neighbourhood only saw eight cases from December 3 to 9, although this number does not include commuter students.