'The future really is yours': National Forum on Anti-Asian Racism speakers give hopeful closing remarks 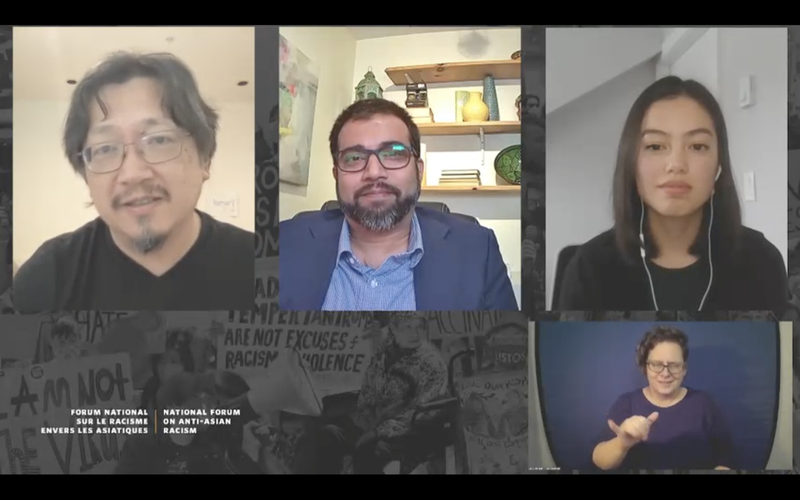 A summary of the outputs from both days was given during a 45-minute panel by Dr. Henry Yu, professor at UBC’s department of history; Mohammed Hashim, executive director of the Canadian Race Relations Foundation; and Jacqueline Louie, board member of the Foundation of Asian Canadian Lawyers (BC).

The Forum was held in response to the rise in anti-Asian hate and racism over the past year, exacerbated by the COVID-19 pandemic and exemplified in the tragic Atlanta shootings earlier this year.

A report summarizing the themes from the Forum and action plans for the future will be released sometime next week.

Yu began the closing remarks by emphasizing how Asian and non-Asian Canadians cannot combat anti-Asian racism and violence in Canada without recognizing the fact that we reside on Indigenous land.

One major theme brought up was the ways in which the Forum brought people with diverse perspectives and experiences from all over the country together to talk about anti-Asian hate.

“I know there’s such a diversity of opinions, but … this Forum has given energy to many people who felt they were doing this work alone,” said Hashim.

“Representation can’t be for representation’s sake,” stated Louie. “A seat at the table is not very powerful, depending on what you bring to it.”

The closing remarks also highlighted fervent support for youth activism against anti-Asian racism. Yu and Hashim both encouraged passing the torch from previous generations to the youth of today in order for them to build a hate-free future for themselves.

Louie concluded the summary with a poignant remark about how despite the hopelessness and pain many may feel right now, change can happen just as fast as we want it to.

“Change is about priorities,” she said. “And so I think we need to look within ourselves and within our communities, to recognize the power that we have to push decision-makers … so that this change isn't as slow as we think it might be.”