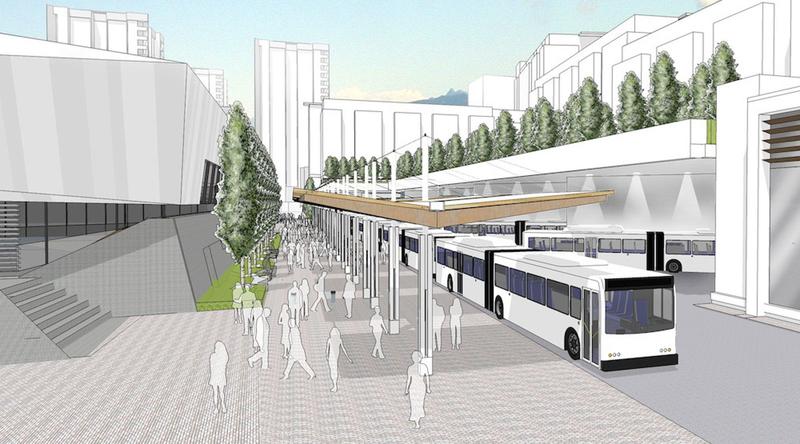 A rendition of what the new bus loop is planned to look like. Illustration courtesy UBC / The Ubyssey

UBC is planning to enhance the student transit experience by creating an integrated bus loop and residence development, scheduled to be completed by August 2019.

“Integrating these two things together is a really smart way to maximize use of valuable land [on campus],” said Andrew Parr, managing director of Student Housing and Hospitality Services (SHHS).

Construction on the Gage South Student Residence is scheduled to begin in the spring of 2017 on the site of the existing bus loop. An interim bus-loop facility — located between the new Aquatic Centre and War Memorial Gym — is currently being constructed.

John Metras, managing director of UBC Infrastructure and Development, expects the project to be “a much improved gateway experience for the university.” Metras explained that the new facility was designed with improved bus shelters for those waiting at pick-up bays, as well as a more efficient system to move the flow of riders onto campus once they are dropped off.

The housing complex will include a range of layouts, with studio units similar to those at Ponderosa and Marine Drive — spaces that range from one to four bedrooms and some townhouses, said Parr. The complex will also include the 140 square foot nano-units, a model of which was on display to students in February earlier this year.

According to Parr, the project was inspired by “the need to expand student housing and to do so as quickly and as effectively as possible to meet the needs of students at UBC.”

“UBC’s desire to invest in partnership with TransLink in a proper arrival experience is a good one and an important one [for] UBC to make,” said Parr.

This integration will help to build the social core of the campus — new amenities will also be added in the area surrounding the development.

“That area of UBC was originally not dedicated to student housing — it was actually going to be a neighborhood, so more market housing and rental housing,” said Parr. “The AMS and students didn’t agree with that and began a process of communication with the university, which ended up changing it from that dedication to student housing.”

Parr also noted that the project would contribute to UBC’s Sustainability Initiative in several ways by reducing the number of commuting students and using low-flow water systems as well as renewable and sustainable finishes.

“We’re very conscious of the ecological sustainability in terms of the development itself.”

Make the Most of UBC