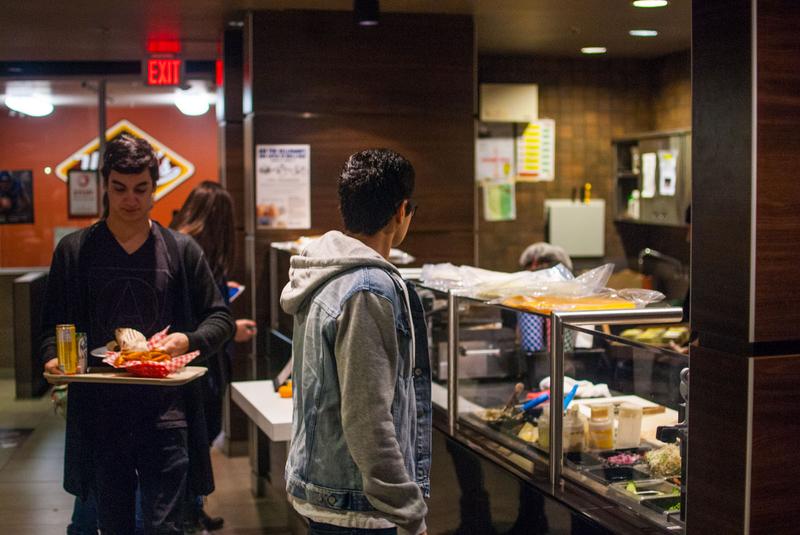 A new meal plan has been approved to take effect in September 2017. While its development was initiated six months ago, the plan does factor in input from the Residence Hall Association (RHA) and a recent petition according to Colin Moore, the director of Food Services. Many students are unhappy with the results.

The main change is the transition from the current three-tier system to one mandatory and more expensive meal plan.

A higher percentage of the plan will also go toward food, with $141 is cut from the overhead fee. A 25 per cent discount rate is also instated for the three dining halls, which would allow students who spend all their basic meal dollars to recover 100 per cent of this fee.

“One of the biggest things [that we heard] was that there weren’t enough meal dollars on the current meal plan to cover the two terms,” said Moore. “We want this new plan to meet as many students’ needs as possible and provide them with enough meal dollars to eat for both terms.”

“Is this a joke?” commented second-year science student Werd Khader on a post about the plan in the UBC Class of 2020 Facebook group. “Students complain about paying too much for their meal plans and UBC housing decides [it’s] a good idea to increase the prices?”

Some believe that this plan doesn’t tackle the roots of the problem.

When Food Services evaluated the 217 comments on a widely circulated petition concerning UBC’s current meal plan, they found that food cost and quality were the two leading issues. Not having enough dollars on the meal plan lagged behind in third place.

Markus Lee, one of the petitions organizers, noted that these two main problems were not properly addressed by the new plan.

Moore responded by emphasizing the new discount’s ability to bring down food prices.

Others questioned how one plan could accommodate the diversity within the student population.

For instance, a recent survey conducted by the RHA indicates that this price doesn’t reflect student's financial ability, as 33 per cent of the 566 respondents chose their plan based on affordability. For many of the 46.5 per cent who are on the Minimum Plan, this significant increase in cost would pose a challenge.

“[Food Services] were also very insistent about students' diet being diverse, so switching from three plans to one plan seems like a step in the wrong direction,” said Sam Bunka, another organizer. “I’m never going to eat as much as an athlete, so why should we pay the same fee?”

In response, Moore noted that the cost of food would go down slightly with the new discount. Budgeting tools with “samples of menu and meal planning” will also be provided to help students with their budgets.

“For those with further questions around budgeting and financial challenges, we want to continue supporting them through their [Enrolment Services Professional],” he said. “In extraordinary cases, Student Housing and Hospitality Services may be able to arrange a payment deferral plan.”

Leftover flex dollars can be refunded at the end of term, but basic meal dollars will be transferred to a carryover plan.

The second change tackles the problem of students being overcharged by installing transaction screens. This increase in transparency will be complemented by the introduction of the 25 per cent flat discount rate, as the current discount system is still inconsistent.

The third change makes the new UBC Food Vision and Values the guide for “all ingredients and menus.” Food Services will be “completely revamping” the menu at Totem Park for fall 2017. Place Vanier will also receive a new menu and “a small renovation.”

While students view these changes as positive, they are overshadowed by the issues of the food and meal plan’s cost. As a result, the overall plan is currently not well-received by students and student-led groups.

“[RHA] as a whole is not in support of the new proposed meal plan,” said Carissa Kirk, the residence association executive president of Orchard Commons. “Just based on my experience living on residence for three years, I would be heartbroken if some students chose not to come to UBC because they couldn’t afford the food.”

“Moving forward, we just have to inform more people,” said Soniya Udayashankar, the residence association executive president of Totem Park. “Get the words out and hope that that would bring about a better change or meal plan for [the coming] years.”