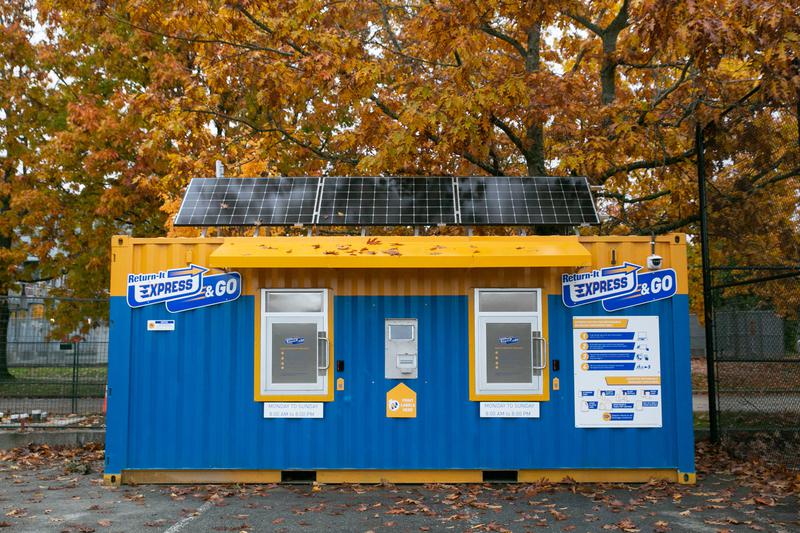 "I think that now more than ever is [the] time to support these sustainability initiatives and to make sure that we are protecting the environment at all costs." Isabella Falsetti

The AMS has partnered with Return-It to bring an “Express & GO” recycling station to campus in an effort to reduce waste on campus and support UBC’s Climate Action Plan — but some say more needs to be done.

The station allows users to recycle unsorted and pre-bagged beverage containers and get refunds for them which can be redeemed by Interac e-transfer or cheque. The Return-It station is located in the parking lot at 2465 Health Sciences Mall and operates between 8:00 a.m. and 8:00 p.m. The station is solar-powered and enclosed in a 20-foot repurposed shipping container.

In an email to The Ubyssey, Allen Langdon, president and CEO of Return-It, said the company is excited to partner with UBC as “[UBC’s] values and environmental leadership aligns with Return-It’s social purpose to ‘foster a world where nothing is a waste’.”

“This new Express & GO recycling station fills a gap for consumers who previously had to travel over ten kilometers to recycle their empty beverage containers for deposit refunds,” he said. “We know how busy students and others on campus can be, so we have created a convenient, easy, and contactless way for students and residents to recycle.”

In an interview with The Ubyssey, AMS VP External Saad Shoaib said that the project’s main goal is making sure that students can get money back for recycling while reducing their carbon footprint.

“I think that one of the key things I’m personally excited about is having a solution that protects our environment and supports sustainability through the responsible recycling of empty cans and bottles on campus. I think that now more than ever is [the] time to support these sustainability initiatives and to make sure that we are protecting the environment at all costs,” Shoaib said.

Jennie Zhou, a second-year environmental science student and the creative communications lead at UBC’s Climate Hub, is more skeptical about the extent to which the new station is going to contribute to UBC’s Climate Action Plan.

“While it is a nice sustainability initiative on campus, at the same time we also want to question the framing of the Express & GO station and if that’s putting the responsibility of the climate crisis and sustainability onto students instead of institutions,” said Zhou.

“Whilst it is a good initiative it definitely raises certain questions of what more can be done, and whether it really was a necessary or sufficient initiative to start on campus,” she added.

Zhou hopes to see UBC place its resources in addressing large-scale issues such as establishing a more concrete and time-sensitive divestment plan.

“We don’t know what their timeline is. They say they’ll divest by 2030 but we don’t know if that’s a promise they’re going to keep or not … these are the larger-scale issues that we want to see UBC spend their time and energy addressing, rather than a recycling station.”