An old rivalry erupts at Board of Governor’s Great Debate 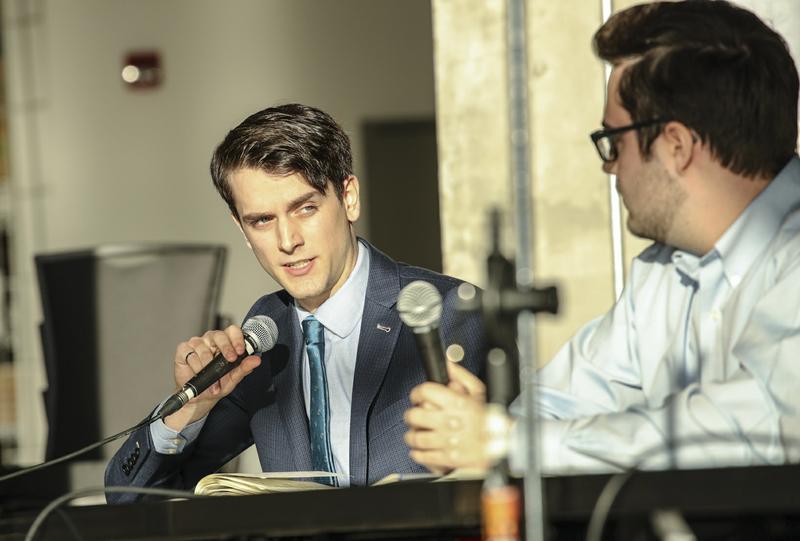 “You talk about wanting to consult more students group, but you haven’t done that as chair of governance,” said Holmes. Salomon Micko Benrimoh

At the final Board of Governors (BoG) debate, an old rivalry stole the show.

But it was the long-set rivalry between Holmes, the current VP Academic and University Affairs, and Braam, the current AMS law councillor, that defined the debate.

Braam used his opening statement to tear into Holmes’s record of failing to follow AMS code and backlash from councillors, much of which he has spearheaded in his time on Council.

“I’ve spent my time on calling out abuses by the AMS executives,” said Braam.

Holmes responded that Braam has not adequately consulted students in his role as AMS Governance committee chair.

“You talk about wanting to consult more students group, but you haven’t done that as chair of governance,” said Holmes.

Since being elected to Council, Braam has been a vocal critic of mismanagement from the executive, frequently peppering them with questions when they fail to follow code and even proposing a motion of censure when they violated their own bylaw.

Holmes has often been on the receiving end of Braam’s attacks, and has argued in Council that they are divise and ignore the complexity of his role.

Incumbent governor Malone stayed on the sidelines of the clash. Awais Quadre, the fourth candidate, did not attend.

During his statement, Braam also dropped a bombshell allegation that Holmes privately pressured councillors who voted to censure the executive to stop criticizing them.

In a statement issued after the debate, Holmes disputed Braam's characterization, but acknowledged the meetings took place.

“My opponent and every Councillor I spoke with never raised any issues publicly or privately with me about these conversations after they happened,” said Holmes.

After sparks flew, candidates gradually returned to the questions.

Candidates were able to agree on an audience question on divesting from fossil fuels, which students voted in support of in 2014.

Malone was able to showcase her role in promoting UBC’s sustainable investment fund alongside her co-governor Jakob Gattinger.

“We are pushing to make sure the sustainable future pools, which is the divested version of our endowment, is advertised as much as it could be,” said Malone.

Braam and Holmes both shot higher, saying they would aim for a complete overturn of UBC’s legal opinion that prevented it from fully divesting.

On a question about UBC’s harassment and discrimination policy, which is currently under review. Malone was cautious in her answer, stressing she would need to reach out to affected groups to gain perspective — something she has extensive experience with on the Board.

Braam and Holmes clashed again, this time on policy. Holmes, who served on the review group, touted the removal of a one-year limit for reporting complaints as a victory — although that policy has not been finalized.

Braam took the opposite position, noting the current review would allow UBC to disclose faculty members’ personal information — concerns he shares with the UBC Faculty Association. He also objects to the removal of “harassment” from the policy and narrowing its scope.

“They are making it limited to policies that fall under the BC Human Rights Act,” he said.
“I think UBC could be a leader rather than deferring to the absolute minimum.”

When asked about transparency, Holmes flexed a long track record of consulting students on issues like the Integrated Renewal Plan.

“What I’ve helped push for within student senate caucus is that they’re coming back to more student bodies. To talk about what needs to be implemented in IRP to make the student experience better,” said Holmes.

Malone once again demonstrated her long experience in the role, stressing that consultation at the Board level was not as simple as sending out surveys.

“Reaching out is complex,” said Malone. “I think our university structure is inherently confusing for students…. There’s not necessarily one person who holds the bottom line on every topic.”

Braam said that consulting more constituencies is the key step — the one area where Holmes seemed to agree with him.

Near the debate’s conclusion, fourth-year mature student Rodney Little Mustache — a former presidential hopeful and major proponent for Indigenous rights within the AMS — asked why no one was being held accountable for the violation of the university act that had been taking place in the AMS.

“They’re setting a bad example for the other students and the people around us who want to study law,” said Little Mustache.

Candidates all pledged to resolve the issue.

“What happened with the election rules is absolutely ridiculous,” said Holmes.

A difference of ideologies

The showdown between Braam and Holmes marked an ideological divide among candidates.

Holmes, who has extensive connections within the university, prioritizes results. Braam, the watchdog, prioritizes accountability and transparency. And Malone, the veteran, was the technocrat who was able to rise above partisan debate.

What was unclear at the debate’s conclusion was which one is best for the job.

“One of my opponents likes to point down to the many things over the last year that I might not have done, absolutely correctly,” said Holmes.

“I’m actually showing that I can get things done within the university,”