Most UBC students are women. So why are all the presidential candidates men? 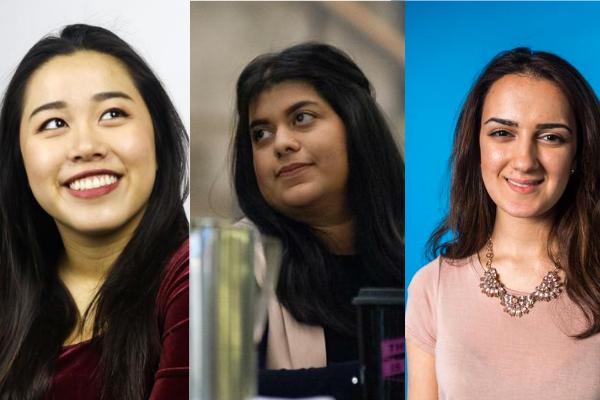 In recent years, many AMS leaders have been female. So why are they so under-represented in elections?

Only nine out of twenty-four AMS, Senate and Board of Governors candidates are female, and all five presidential hopefuls are men. Fifty-six per cent of students on campus are women — but candidates and incumbents alike say there are significant barriers to women running.

This mirrors low female representation outside the university. In the 2015 federal election, 88 female MPs had been voted in to the 338-member House of Commons — a one per cent increase from 2011’s numbers.

And like the House of Commons, the AMS executive, Senate and Board of Governors have historically been dominated and led by men.

Compared to last year’s AMS elections, where a third of candidates were female, there has been a five per cent increase in the number of women seeking office. None of the current candidates identify as non-binary.

“I think within UBC in particular, I definitely know a ton of women who are incredible leaders on this campus and have really got amazing experiences that they built up through their time here,” said VP Academic and University Affairs candidate Julia Burnham. “But when you ask them to run, the initial reaction is “‘What? Me?’”

Current AMS President Marium Hamid says women and non-binary people often feel like they’re not welcome in positions of power — even when they’re qualified or overly qualified for the job.

“Trying to tell a woman that she is good enough for the job or that she even might be better for the job than other folks takes a lot for a woman to be able to feel that she is qualified for that,” said Hamid. “You need almost a whole legion of people and friends and allies around you to make you feel that you’re included, that it’s not just about being in the room. It’s often feeling like you belong in that room.”

Some candidates said that they faced additional barriers because they also belong to minority or equity-seeking groups.

“I can’t speak for the women currently running in the elections but for me, there was an additional barrier of being a person of colour, with cultural barriers,” said former AMS VP External Sally Lin.

“I grew up in a fairly traditional Chinese family and for my parents, grades were always end-all or be-all. Whenever things got busy [or stressful], the first thing they told me to do was to drop my extracurriculars, my involvement in student government — but that’s where I felt the most [at] where most of my transformative learning occurred.”

But while progress has been modest, many AMS executives in recent years have been women including Hamid, Lin and former AMS President Ava Nasiri.

When asked what advice she’d give to a woman considering running for a race, Nasiri’s advice was to never underestimate your self-worth.

“I never looked at who else was running, not did I think about what I wanted out of the positions,” she said. “Rather, really just focus on doing your absolute best in service to those students that you’re running for in the first place.”

Many candidates say the major factor that convinced them to run was a positive role model in the AMS, as well as a network of friends and supporters who kept them moving forward.

“I had seen amazing women in politics before my time,” said Hamid, who said she was inspired by the example Nasiri set as AMS President. “... I had never envisioned myself being in that position.”

“It’s a decision that took a lot of my friends convincing me for the position.” she added. “I never thought of myself as somebody who would want to enter student politics or politics of any kind for that matter, but it was a lot of push and a lot of convincing as well as encouragement from my closest friends that remain to be here.”