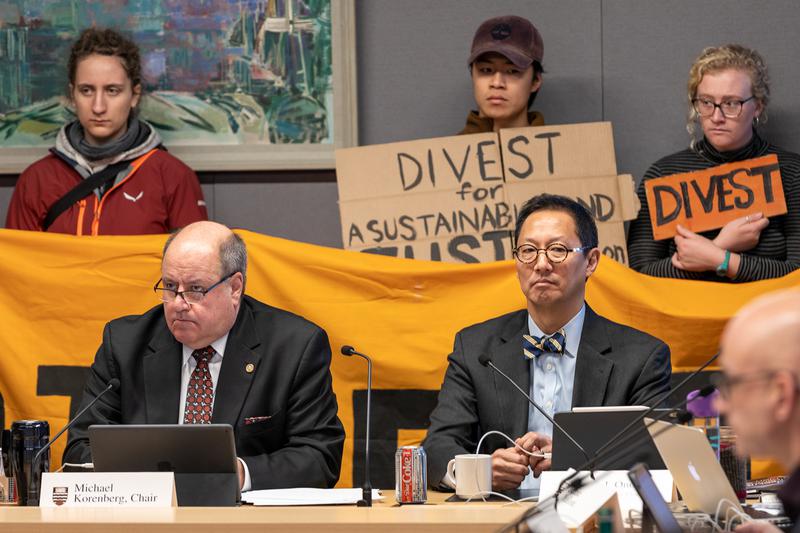 Climate protestors attended a Board of Governors meeting in December 2019. File Zubair Hirji

UBC declared a climate emergency last December after receiving an open letter signed by around 1,500 students, staff and faculty members.

A year later, the Climate Hub continues its work and the UBC Climate Emergency Task Force is finishing up its recommendations to the Board of Governors, although with delays.

The university’s decision to declare a climate emergency came after student activism from clubs such as Climate Justice UBC, then known as UBCC350, calling for UBC to divest its endowment from fossil fuels.

Climate Justice UBC and climate club Extinction Rebellion UBC did not respond to requests for comment.

While UBC has not yet fully divested, it committed in 2019 to doing so. Throughout 2020, the UBC Investment Management Trust has been making slow progress toward that goal.

In the meantime, the Climate Hub has proposed a $1.5-million fund for climate initiatives. This fund would come from the $6.8 million tuition surplus that the Board of Governors allocated to the GSS and the AMS.

This fund would allow for the advancement of sustainable initiatives, such as the AMS Sustainability Action Plan. The Climate Hub also proposed that this money would go towards funding BIPOC students in shaping climate policy, the creation of a UBC Activist Lab, and the Climate Hub.

“It was identified that there was roughly a little over $1.5 million left in the tuition surplus for the previous year, and so our proposal to the AMS and the GSS were a sheet of emerging recommendations that could quickstart some actions as soon as 2021 at some point,” said Colteen Kasteel, a representative for the Climate Hub. “And we’ve been supporting the AMS and the GSS to come up with ideas, how would that money be spent, what would an open call for funding look like, and so on.”

The engagement process began, with on-campus consultation events and a UBC-wide forum.

However, the COVID-19 pandemic forced the engagement process online. The task force held eleven virtual dialogues between May and June 2020.

After gathering findings from interactions with the community, the task force created five working groups. They each focused on Indigenous engagement, research, teaching and learning, community well-being and engagement, and off-campus engagement.

The process has been challenging as the task force has to focus on “synthesizing a tremendous number of great ideas across a broad range of areas” while also “balancing the need for timely action,” said Clare Hamilton-Eddy, a spokesperson for UBC, in an emailed statement.

For its recommendations, the task force drew from the UN Declaration on the Rights of Indigenous Peoples, climate justice principles, 1.5 degree Celsius temperature targets, principles of the managed decline of fossil fuel usage and community experts.

From these recommendations emerged six strategic priorities for the university: campus operations; administration and investment; commuting; community support and engagement; advocacy and partnerships; and teaching, learning, and research. Under each strategy, a set of recommendations were listed, detailing how the university should respond.

The task force was supposed to present these recommendations to the Board of Governors this month. However, the pandemic has delayed this process.

Part of the reason for the delay is to allow marginalized communities bearing a disproportionate impact of the climate crisis to have an appropriate amount of time to consider these recommendations.

“A key tenet of the Climate Emergency Task Force work is to address climate justice — including the realization of Indigenous rights — and the disproportionate impact that climate change has on marginalized communities,” said Hamilton-Eddy. “The Climate Emergency engagement process has been community-led and intergenerational as we all face the consequences of climate change.”

The task force aims to have the report ready for the Board of Governors by early 2021.