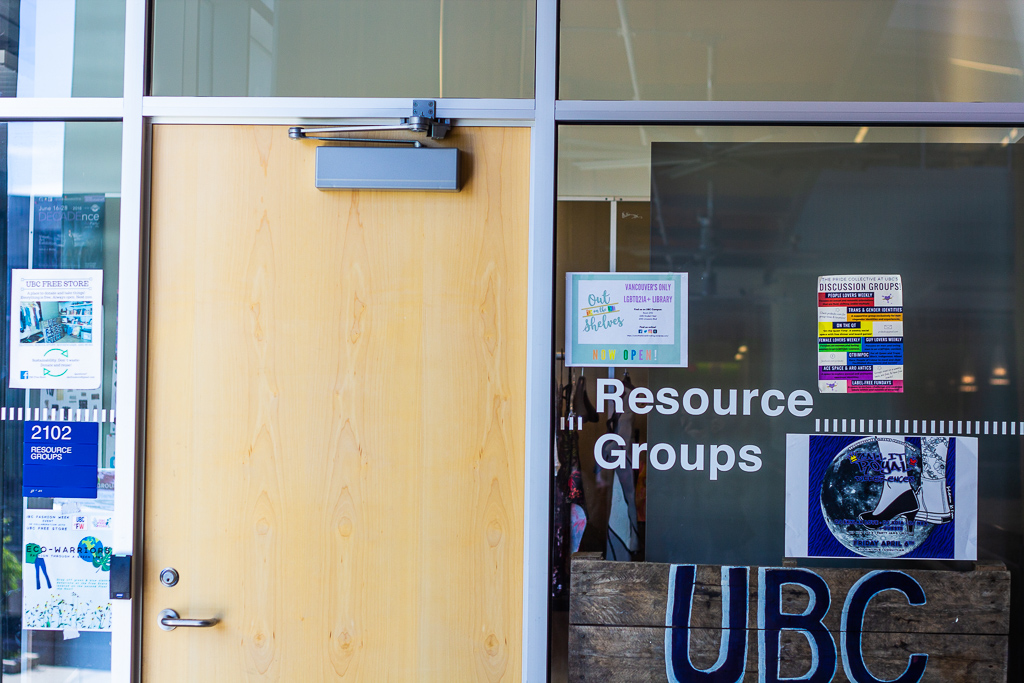 The day before the town hall, AMS Resource Groups published an open letter in The Talon asking for changes in the AMS. Included are demands for clearer communications and transparency, exploring SASC’s independence and a full explanation for why the decision was first made.

The open letter to the AMS regarding SASC was signed by the Resource Groups Allocation Committee, the Pride Collective at UBC, the UBC Social Justice Centre, the Women’s Centre at UBC, Colour Connected Against Racism UBC and the AMS Bike Coop.

The letter is also intended to be read aloud at the AMS’s July 5 town hall meeting, which was originally announced on June 22 after the decision to cut SASC’s support services.

But after intense backlash from the UBC community — which included a Gender, Race, Sexuality and Social Justice Undergraduate Association (GRSJUA) petition that received over 2,100 signatures — the AMS apologized and reversed the cut on June 25. The society also promised to improve its communication with SASC and consultation with students as “immediate actions” moving forward.

But “an apology is not enough,” reads the open letter.

In particular, it says that decision — albeit short-lived — left “feelings of mistrust and betrayal among UBC community.” It also criticizes the society’s perceived lack of transparency, such as AMS Council’s decision to enter a closed session to discuss the cut to SASC’s support services and the lack of consultation with the wider student and survivor communities.

“Given the outpour of support and gratitude that the SASC has received from students and faculty alike, it is unclear why the AMS felt it necessary to cut the support services of the SASC,” reads the letter.

“Many individuals feeling less safe on campus now than they did before and the situation had the potential to be retraumatizing for survivors.”

The letter demands that the AMS explain its rationale for cutting SASC’s support services, particularly after the society had proposed to double the centre’s funding in a referendum question in the 2018 AMS Elections.

In a June 22 public statement, the AMS Executives said support services were being cut to “focus SASC on education, outreach, advocacy and an integral role in ongoing assistance for AMS human resources, clubs and constituencies’ responses to sexual violence.”

The AMS also cited the existence of UBC’s Sexual Violence Prevention and Response Office (SVPRO) as “one centralized space” for supporting survivors. Previously criticizing the lack of awareness around SVPRO amongst other issues, the society also said that the office now has “increased capacity.”

The resource group’s open letter also calls for further independence for SASC from the AMS through an indirect funding model that is similar to the ones used by CiTR, citing a lack of confidence in future AMS Councils to “never attempt to shut down the SASC.”

“I think that the decision to cut the support services for SASC and then the massive pushback from the community at large and survivors just shows how out of touch the decision was and how there was very little, almost no consultation with SASC before that decision was put into place,” said Pride Collective volunteer Shoshana Messinger.

“That … definitely has made the AMS seem to be a little less than competent in handling support services like this.”

“The SASC is very grateful to the resource groups for the solidarity and support we’ve received from them, and we look forward to strengthening our relationships with them as we move forward,” said Alex Dauncey, SASC’s Healthier Masculinities coordinator, in an emailed statement to The Ubyssey.

“We are also very glad to see them making their voices heard on issues of critical importance to the campus community.”

“Symptom of a larger ongoing problem”

The letter also claims the SASC decision is “a symptom of a larger ongoing problem,” citing the society’s earlier decision to bundle the resource group’s fee restructuring with a doubling of SASC’s funding in a single referendum question in the 2018 AMS Elections.

“It does seem like there’s a trend to cut the support services being offered on campus — or to make it seem like we could have SASC, or the resource groups, but not both,” said Messinger.

That question also attracted criticism for the lack of consultation done with resource groups, mirroring the scant communication with SASC prior to the decision to remove the centre’s support services.

“So there has been no communication from the AMS around this issue,” said former Social Justice Centre Co-Chair Tania Talebzadeh in a previous interview with The Ubyssey.

“Why didn’t you, as the AMS, come and approach us if you had issues with transparency and such? Why didn’t you come consult us in relation to how you wish to handle this with the broader student body?”

Now, the letter is calling for reforms to AMS Code to make consulting those services mandatory before funding cuts. It also proposes a permanent seat for “historically marginalized groups” including Indigenous students and women, which could take the form as a permanent seat for resource groups at AMS Council.

More broadly, the letter urges the AMS to make information for the student body more accessible through an updated website and greater general consultation — particularly so that students can hold the society accountable when it may be overstepping its authority.

“The student body that the AMS is supposed to represent seems to be very in the dark,” said Messinger. “I think if the student body had been consulted much sooner, I doubt they would have made cuts to the SASC.”

Many students have criticized the AMS’s upcoming town hall meeting, since it was announced after the society had already released its statement to cut SASC’s support services.

“It comes off more as a placating move more than an actual attempt to hear the opinions of the community,” said Messinger.

Even now, she noted that the late announcement of the meeting time and location — which was released by the AMS yesterday evening — means many concerned students still do not know where and when it is being held.

“It was only today that [the Pride Collective] found out where and when it is,” Messinger added. “It’s not even the AMS who seems to be broadcasting the time and location — it’s the SASC more than anyone else.”

Other students also noted that the AMS’s promise to better their communication and transparency must be a sustained effort and not just through one town hall meeting.

“I think consistency is really key for me, and they have to understand that it’s not something that is going to be regained within a year,” said Kirsten Tarasoff, GRSJUA’s representative in the Arts Undergraduate Society.

“It’s something that they are going to have to work for and provide students the best university experience they can — not just in terms of all the parties but also in terms of providing good, affordable services that students see as necessary like the SASC.”

“We welcome students sharing their thoughts with us on all their concerns,” said Hamid in an emailed statement to The Ubyssey. She added that any questions asked in person or online will be addressed, and the answers will be released in a document following the town hall.

“We hope that tomorrow’s town hall is the start of many conversations we hope to have with the student community.”

The July 5 town hall meeting will be held in the Nest’s Performance Theatre from 7 p.m. to 9 p.m. Students who are unable to physically attend can send in their questions to the AMS.