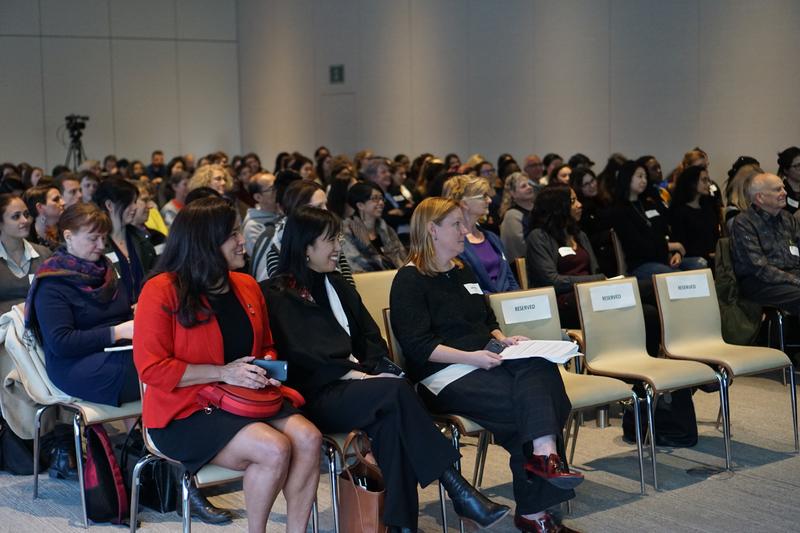 “My mom would say, ‘women are too busy and too important to be chiefs,’ which is kind of a joke, but not really,” said Canada Minister of Justice Jody Wilson-Raybould at a panel on gender and race equity, hosted at the Robert H. Lee Alumni Centre on Wednesday evening.

This anecdote summed up the mood of the “Lead, Succeed, and Inspire” event that showcased influential female change-makers, which had many laughs between serious discussions. UBC’s Equity and Inclusion Office hosted the event in recognition of International Women’s Day (March 8) and the International Day for the Elimination of Racism (March 21).

Wilson-Raybould gave opening remarks about addressing social imbalances in her position as justice minister and attorney general. The panel was moderated by CBC reporter Anita Bath, and was made up of Leonora C. Angeles, UBC associate professor in the Institute for Gender, Race, Sexuality and Social Justice; Patricia Barkaskas, instructor at the Peter A. Allard School of Law; Cicely Blain, founder of Black Lives Matter Vancouver; and Shushma Datt, owner and operator of IT Media Broadcasting.

Diversity not just ‘a marketing tool’

The panelists discussed systemic racism and sexism, particularly within academia.

Barkaskas agreed and cited the Allard School of Law, which has one of the largest cohorts of Indigenous law students in Canada, as an example. She emphasized the importance of how the program makes space for these students as leaders.

Barkaskas is also academic director of the Indigenous Community Legal Clinic, a program at the school that acts as a poverty pro bono clinic for Indigenous people on the Downtown Eastside.

Universities as an ‘enabling environment’ for change

Angeles told The Ubyssey that universities have a social responsibility to change their missions to “become relevant and by becoming relevant, [they] are training this generation and future generations of change-makers.”

She said the university has improved, particularly through the actions of the Equity and Inclusion Office. Still, she said there is more work to be done to create an enabling environment for people at UBC to create social change regarding gender, race and environmental justice.

“There [are] a lot of change-makers in this room here — the audience,” said Angeles. “Young people, who are students, and I only wish they were on the panel to talk about the amazing things they’re doing. So, for me, I think my hopes are on the younger generation.”