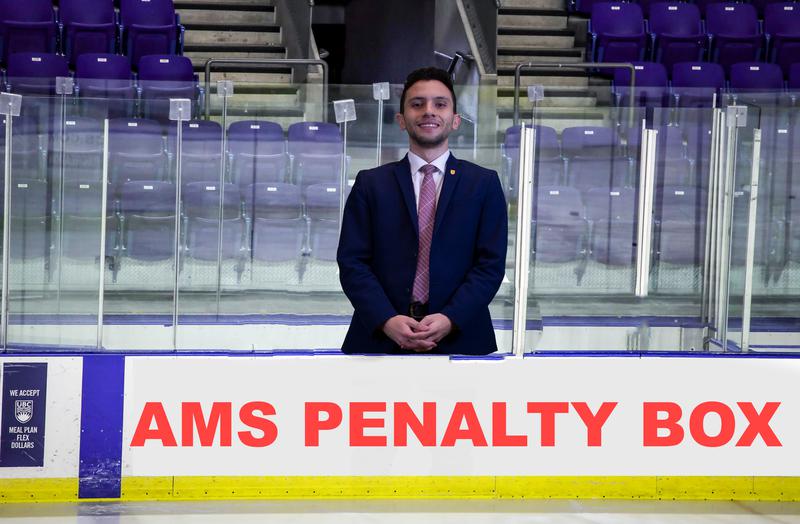 “I didn’t think it would be a problem since this photo had been already approved on my website,” said Borno. Elizabeth Wang

According to Borno, he wanted to ask for an ad approval but Instagram was unable to show the full caption with the photo unless he posted it. He said he posted the photo for around 40 seconds before archiving the post.

Mahmoud provided The Ubyssey with the caption:

“UBC this is your time to choose! We need new and diverse faces to represent us in the UBC senate. To learn more about my plans for next year, visit my website voteMahmoud.ca (link in bio) Voting takes place March 2-6 at AMS.ubc.ca/vote.”

He then used that screenshot to ask the Elections Committee for permission around 9:30 p.m. on February 29.

“I didn’t think it would be a problem since this photo had been already approved on my website,” said Borno.

He told The Ubyssey that he was instructed by the Elections Committee that any photos that were already approved on their websites could be used for other campaign materials.

But he said he was still unsure and that’s why he immediately archived the post.

“I didn’t know if it's going to be okay if I posted it. I was very unsure if this material will be okay or not so I was like let me just archive it just in case,” said Borno.

At 9:45 p.m. on February 29, the Elections Committee responded letting him know that they would be investigating the incident and would have a verdict within 12 hours, explained Borno.

According to Isabelle Ava-Pointon, chief returning officer, Borno was in violation of item 11 of the Campaign Violations and Penalties Handbook.

“An unauthorized Instagram post was published and seen by an Elections Committee member before being archived,” wrote Ava-Pointon in a statement. She told The Ubyssey that “a violation clearly took place,” but since it was his first offence and only posted for the purpose of gaining approval, she only issued a warning.

According to Chief Electoral Officer Ahsan Sahibzada, who was not involved in the investigation due to a conflict of interest, the ruling will be ratified in the Elections Committee tomorrow.

“The issuing of warnings by the Elections Committee is in keeping with AMS Code Section IX A Article 3(5),” said Ava-Pointon in the same statement.

“I apologize, I’m sorry. I will take any responsibility for my mistake,” said Borno in response to the verdict.

But he added that the AMS should be more clear about the rules.

“[In] my opinion this handbook needs to be more clear because at the orientation we have been told [that] we can put everything that we want to be approved on the website and that they could take a look at it and approve it,” he said.

Borno said he thought he didn’t need a logo because the already-approved photo from his website, which he used for the Instagram post in question, does not have a logo on it.

At the orientation, he was told that if they didn’t change the wording from what was on the approved website they were able to use those photos for other campaign materials.

“Turns out we cannot use that apparently,” said Borno.

“The bylaws are not very clear for people to understand. I just think like for the other candidates, I would recommend just keep bother the hell out of AMS Elections on every single thing so you don't end up with a really confusing situation like me.”