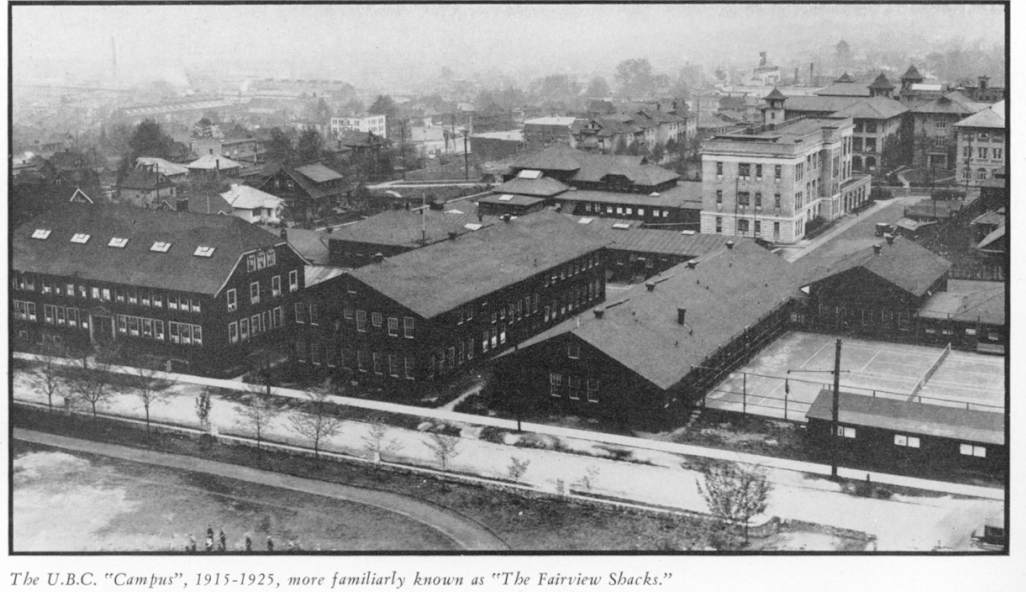 UBC was located in Vancouver’s Fairview neighbourhood at the time. Tuum Est: A History of the University of British Columbia, written by Harry T. Logan in 1958.

“Unprecedented times” has become a mainstay in pandemic vocabulary — but UBC might have set a precedent with its response to another pandemic a little over 100 years ago.

January 28 marked one year since the first case of COVID-19 was reported in Vancouver, and March 13 will be the anniversary of UBC moving classes online. But that wasn’t the first time UBC had to close its doors due to a pandemic. On October 20, 1918 — 10 years after the university’s founding — classes were suspended for five weeks due to the 1918 influenza pandemic.

Influenza was first reported in Vancouver on October 5, 1918. Vancouver General Hospital (VGH) was quickly overwhelmed by influenza and running out of beds.

“The epidemic put tremendous strain on doctors and nurses, the community’s first line of defence against sickness,” historian Margaret W. Andrews wrote in a 1977 issue of BC Studies journal. 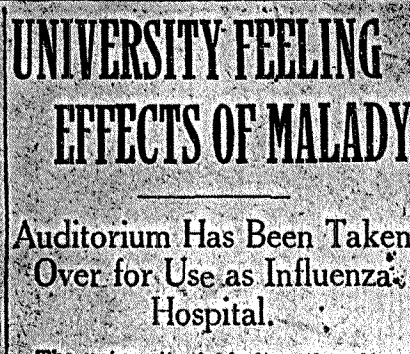 VGH took over the UBC auditorium. Screenshot via University Archives

At the time, UBC’s campus was located in Vancouver’s Fairview neighbourhood close to VGH. The Board of Governors (BoG) allowed VGH to take over the auditorium and an adjacent classroom building on October 14, 1918, to create an isolation ward of 100 beds for influenza cases.

The takeover of these spaces displaced classes to places such as the library stacks and a local Baptist church. Four days after the building takeover on Friday, October 18, the student body campaigned for the BoG to close the school. By the following Sunday, the BoG announced that classes would be suspended for five weeks. The academic calendar had to be rearranged, causing Christmas exams to be postponed until February. 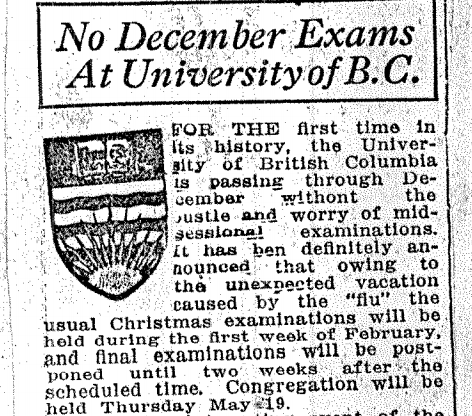 UBC lost the first member of its community before the closure of the school. Gerald M. “Shorty” Harvey had left UBC in September 1918 to enlist in the army. He died from influenza in Toronto on October 12, 1918 during training.

World War One, which had taken many students and faculty away from the university, came to an end on November 11 that year, but UBC was unable to celebrate the war’s end due to the flu. Harvey was given an obituary with the other students killed while in service in the 1919 yearbook.

On October 20, the same day BoG announced the university closure, Dr. Frank F. Wesbrook, the UBC president, died. While his cause of death is not certain, acting head of the university archives Erwin Wodarczak said it’s possible that influenza may have been a contributing factor.

“President Wesbrook had been ill for a while, mainly with a kidney infection … The infection spread from his kidneys and caused high blood pressure, heart problems. Eventually, it started affecting his eyesight, and he had set aside his duties,” Wodzarczak said.

The university reopened after the five-week closure and remained open for the rest of the pandemic, despite bouts of influenza in January and March. 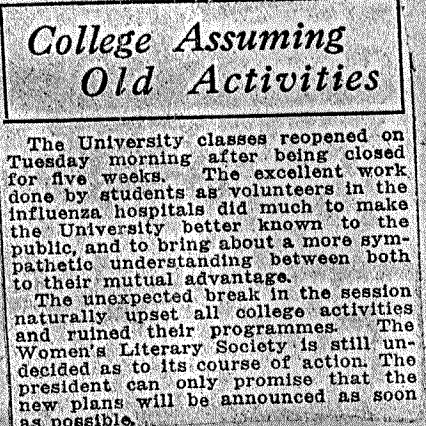 “[The second wave] was far less extensive than that first wave,” said Wodarczak. “Although I’ve not read anything or seen anything about this, I imagine they did not receive any directives from the city health officer or any other public health authority to close or restrict classes.”

A handful of UBC students volunteered to help out in hospitals during the pandemic, which was instrumental in the founding of UBC’s nursing program, according to Wodarczak. In the same spirit, a group of current UBC medical students founded the BC COVID-19 Medical Student Response Team in April 2020 to help frontline workers.

Even though this isn’t UBC’s first time operating in pandemic conditions, advancements in the past 100 years make functioning in the pandemic safer and easier. With the invention of the internet and personal computers, UBC didn’t have to cancel classes or move any exams, although UBC did experience a change to the academic calendar with the extension of winter break.

Both the UBC communities of 1918/19 and 2020/21 have felt the loss of friends and family due to disease. While the academic circumstances a century ago are far from today’s, many can echo the sentiment expressed at the beginning of the 1919 yearbook that this precedent-setting academic session will not be forgotten.

“The session which is now drawing to a close will remain forever one of the most historical and eventful in the annals of the University of British Columbia.”