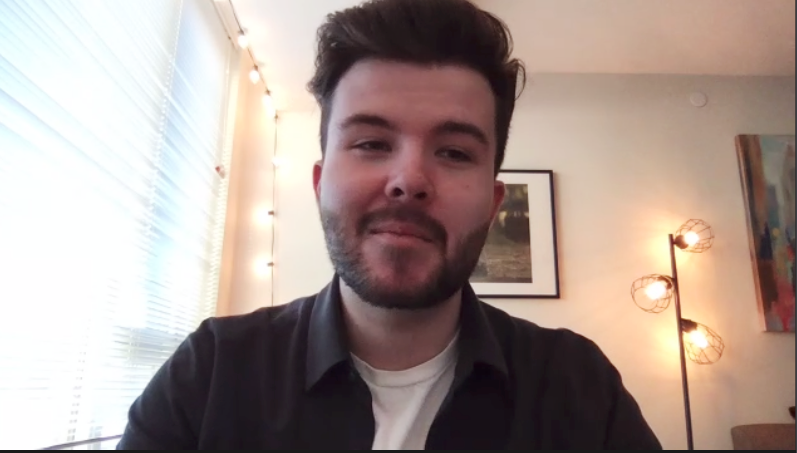 Three races are uncontested this year — something Evans said could be an anomaly due to COVID-19. Screenshot via Zoom

Presidential candidate Cole Evans sat unchallenged in the Zoom call, fielding questions on equity, governance and his lack of competition.

The fact that the race was uncontested didn’t let Evans off the hook as the audience pressed him on how he promoted involvement in the AMS exec as someone seeking re-election.

Three races are uncontested this year — something Evans said could be an anomaly due to COVID-19.

While he said that the lack of new candidates was a concern and that the AMS could have done more to draw out new candidates, he said mostly stayed out of elections business this year since he would be running for a second term.

He spoke in hypothetical terms about how he would approach a student who asked him about running for president this year.

“The way I approach things is if somebody approaches me about running, I'll be honest with them … It’s important to still encourage these people to do what’s best for them [while] being honest with them.”

But Evans declared that he wouldn’t run again if re-elected now and would be more active finding potential candidates next year.

The engagement issue turned inward to councillors and staff as Evans answered a question about AMS bureaucracy. He promised a review of governance structures to make committees more active.

That’s something that is a fault of deeper governance issues, according to Evans, not AMS Council. “I don’t put blame for that on councillors at all,” he said.

On the AMS’s controversial annual general meeting (AGM) this year, the candidate hinted that the process he took might not be the best to get the bylaw changes he wanted. Still, Evans defended his efforts to push through bylaw changes that had failed in referendums several times prior.

“I still stand by everything that we changed,” he said. “But I also don’t think that we should be creating a habit of passing a slew of bylaw changes at every single AGM.”

He plans to see the AMS equity plan through to implementation and expand the existing AMS equity role into a multi-employee unit.

A member of the Palestinian community asked how Evans planned to support equity for the Solidarity for Palestinian Human Rights club. The candidate said the equity plan would address religious differences and harassment as well as anti-Black and anti-Asian racism.

Taking a question on how he’d protect Chinese students now that the AMS has voted to release a statement decrying the human rights situation in Hong Kong, Evans affirmed his solidarity with Hong Kong activists.

“We’re an organization that supports fundamental human rights and freedoms around the world, regardless of where they’re located, and we don’t see that as being a political statement.”

The presidential candidate will take the stage again at the Great Debate on Saturday, February 27.