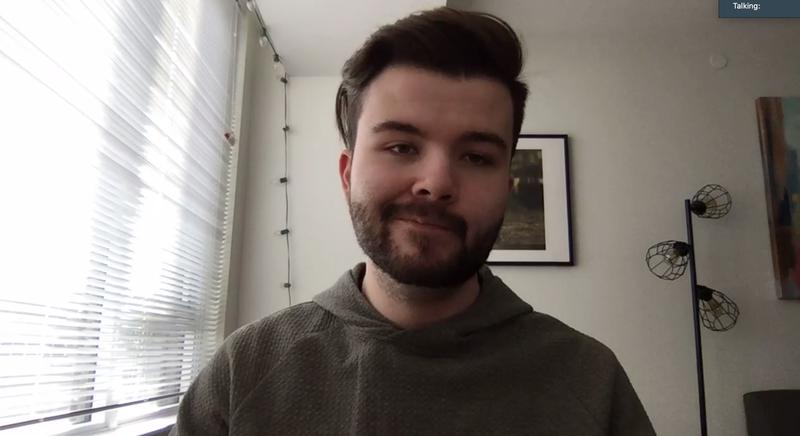 Evans is running uncontested — one of four AMS insiders vying for seats without competition. Jasmine Foong

While re-election hopeful Cole Evans recognizes his shortcomings as this year’s AMS president, he faced questions at the Great Debate about how he used his authority over the past year to address issues he’s now promising to fix.

He’s running uncontested — one of four AMS insiders vying for seats without competition — part of wider concern that this year’s execs did a poor job of getting students involved enough to run for executive positions.

An audience member took Evans to task for saying that he didn’t have absolute authority over the organization as an exec when asked how he’d fix management problems at AMS Events and staffing issues at SASC.

Evans defended his statement and his leadership style.

In response to an audience question condemning Evans for not being critical of fellow execs flouting public health guidelines, he said that he was firm with his executive team but regretted the language he used to describe students with the press. Following a Halloween gathering in the Nest, Evans had said that those at the gathering acted like “idiots.”

He said that he’d support reviving an internally-developed strategic plan if Council gave the green light, adding that those plans aren’t for execs — who already have a pulse on the AMS’s direction — but for the AMS’s large community of staff to see the society’s vision.

Evans carried his equity focus from the last debate to this one, saying he would explore growing the AMS’s relationship with the Musqueam while recognizing consultative limits. The Musqueam Indian Band is busy, he said, and any agreement shouldn’t be tokenistic.

“We have to be a little bit sensitive to the fact that we shouldn’t be pursuing an MOU [memorandum of understanding] just for our own sake. If we’re going to pursue an MOU, it’s a mutually beneficial agreement so it’s something we have to make sure that is worth the time of Musqueam.”

The pressure stayed on as the candidate fended off questions about his status as the lone candidate in the race.

Acknowledging the need for better mentorship, Evans called the lack of participation an organizational problem, but one he contributed to as AMS president.

His self-interest came under scrutiny after he said he couldn’t play a big role in election engagement as someone who planned to seek re-election. Still, he painted himself as someone who would give mentorship to anyone who asked.

“I take responsibility as a president for the organization not doing enough to work on elections, but at the same time I’m also limited to what I can actually actively work on as the president if I’m indeed thinking about seeking reelection in a year.”

Evans showed slight irritation as the line of questioning continued, which bled into discussion about how he’d represent student needs to the administration. An audience member asked about the perception among students that the AMS sides with university executives over the student body.

“Are we always screaming about it and putting statements out about everything? No, because I don’t think that’s an effective way of going about working with the administration,” he said.

“But just because you don’t see us necessarily on a loudspeaker about every single issue at UBC doesn’t mean that we aren’t working behind the scenes to push the administration to change things.”