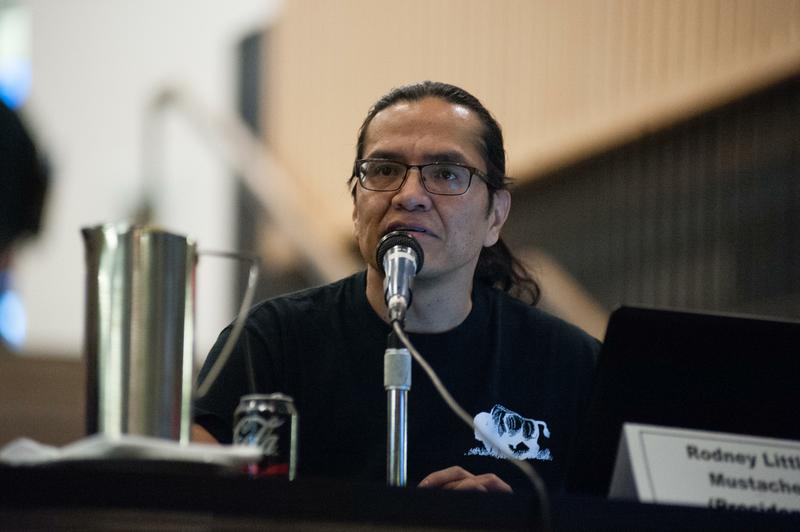 Candidates Andy Lin, Marium Hamid and Rodney Little Mustache met again on Thursday evening for the Great Debate. This time, the presidential hopefuls fielded questions more tailored to their platforms than just those about the broad structure of the AMS.

The debate opened by asking for three concrete results that the candidates would want to see by the end of their term if elected.

Hamid intends to secure funding for projects like the Food Bank, conduct an accessibility audit for buildings on campus and revamp the AMS’s communication strategies by launching a new website and better feedback channels. Little Mustache aims for greater inclusion and engagement of Indigenous students at UBC, while pointing out they had very limited presence at the debate. Lin wants more gospel outreach on campus, but also wants to see students’ voices heard.

“[I want to] preach the gospel not because I want to be obnoxious, but because I love you and I want you saved through the truth,” he said.

A question about which AMS committees the candidates would want to sit on as president then put their knowledge about the society’s governance structure to the test, to which the candidates responded with opposite degrees of familiarity. Current AMS Student Services Manager Hamid was able to show her edge over Lin and Little Mustache, who both listed committees that no longer exist as ones that they would sit on.

The audience then had the opportunity to see more of the candidates’ personalities from their responses about what a typical day would look like for them as AMS president.

Marium listed attending senior management meetings and committee meetings as well as engaging with students through office hours or campus events as part of her day. Lin would “be sitting in office waiting for people to contact [him] about their issues” and reading Bible scriptures, besides preparing for and attending meetings.

Little Mustache was the only candidate to interpret “a typical day” literally.

“The first thing I would do is wake up. I’d go to campus. I’d say hello to as many people as I can … I’d go to class if I have class that day — if not, I’d go to the office. I’d start my day by reading my agenda and then I would meet people within committees, hear what they have to say … I’d also go home if that was a slow day, and [relax and watch a show]. Then I’d get down to work — sometimes, I would stay up until 3 a.m. reading policies or papers that I have to deal with the next day.”

When reminded that he had 10 seconds left, Little Mustache said “I’m not done yet — then I would say goodnight.”

Each candidate then received questions that were formulated specifically to reflect their experience or platform.

Questions directed at Lin revolved around how he would reconcile his Christianity-heavy platform with serving a diverse student population and supporting services like the Pride Collective. He responded that he does not want to stop students from practicing what they believe in and wants to host inter-faith dialogues instead.

Given Hamid’s past and current involvement with the AMS, she was asked about how she would bring an innovative perspective to the presidential role. Without mentioning specifics, she listed her ability to be critical of the society’s structure, to keep the AMS Council accountable and to engage with students.

In response to the question about how he would improve AMS strategic plan, Little Mustache reiterated the need for more Indigenous representation. In order to do so, he would declare 2020 the year of the Indigenous student and centre those voices, in addition to initiatives such as the reconciliation pole and the upcoming opening of the Indian Residential School History and Dialogue Centre, which he sees more so as honouring Indigenous elders.

“We need to hear the student’s voice and encourage them and show them what this university is about,” Little Mustache said.

Before the closing remark, the floor was opened up for audience’s questions, which saw a wide range of topics.

One audience member asked about how the candidates would respond to incidents of anti-semitism on campus, such as the recent sharing of an anti-semitic article by two UBC groups with one being an AMS service.

Hamid responded that no student should feel unsafe on campus and feel that their freedom of religion is questioned, while saying that the AMS needs to ensure this does not happen again with a student-facing service. Little Mustache stressed that students must fight for unity and start thinking of themselves as one. Lin said that this is a “sin issue” and the solution is the gospel.

“People need the love of Jesus Christ because Jesus said you need to love your neighbour even more than yourself,” Lin said.

The candidates were also asked abut how they would respond to the annual anti-abortion demonstration on campus. Although both Lin and Little Mustache acknowledged that the group has the right to free speech, Little Mustache also added he is “angered” by them and believes that “a woman’s body is her own.”

“As a woman, working in this building and walking through it every single time this happens, this has hurt me and harmed me in a lot of different ways,” Hamid said, adding that more wellness services like the Sexual Assault Support Centre (SASC) and Speakeasy were made available outside the Nest for the first time this year in order to support those who might be affected by the demonstration.

Another audience member also took the opportunity to ask Lin whether he is a joke candidate or not.

“No,” Lin said, putting to rest a question that has been voiced publicly by many students on social media.