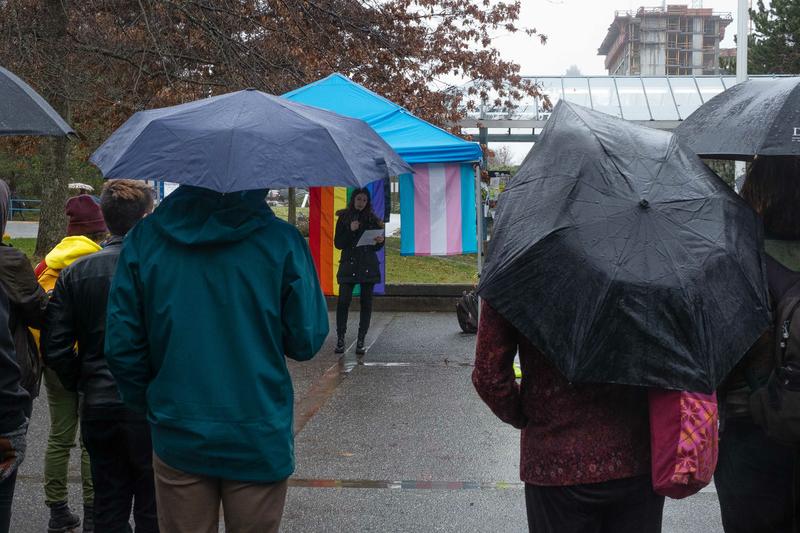 The Pride flag was raised today in the courtyard between Brock Hall and the Life Building (Old SUB) to commemorate the start of PRIDEweek, a “week-long celebration of queer and trans identities” at UBC.

Hosted by the Pride Collective, the theme for this year’s PRIDEweek is “Revelry and Resistance,” which frames the acts of existing and enjoying one’s self as political acts within queer communities.

“Revelry is partying and having a good time and being proud and happy — that is itself an act of resistance and an act of political activism.”

The flag-raising ceremony opened with a land acknowledgement speech from First Nations & Indigenous Studies and Geography Professor Sarah Hunt, in which she recognized and discussed the location of UBC on unceded traditional Musqueam territory.

PRIDEweek volunteer Nodi then gave a speech about the theme.

They discussed how political queer communities have found themselves “at the margins of an expanding neoliberal project to depoliticize queerness in general and queer revelry in particular.” They then illustrated this idea by pointing at the presence of Prime Minister Justin Trudeau, a police float and non-queer spectators in Vancouver’s Pride Parade.

“It’s not only important that we celebrate, but that we reclaim our celebration in its politicized and resistant entirety,” Nodi said.

The final speech was given by volunteer Shoshana Messinger, who discussed the importance of the #MeToo and Time’s Up movements. They stated that PRIDEweek stands in solidarity with these movements and their goals of normalizing the condemnation of sexual assault and sexual harassment.

But Messinger also called these movements out for under-representing the experiences of women of colour, non-binary individuals, agendered people, transgender men and other feminine-presenting individuals.

“Creating exclusivity within a movement does the movement no favours,” they said.

Following the flag-raising ceremony, the Pride Collective is hosting a number of events to commemorate PRIDEweek, including an academic conference, a pub night and a drag show in The Pit.

Eden, a volunteer at PRIDEweek, credited the importance of the week overall in building a community for queer students.

“Seeing everyone out here today, I realized that it was a really good way for students to get connected with each other,” they said. “And then, also, as a queer student, to see that there are people who are supporting you, and that your community is bigger than you thought it was.”