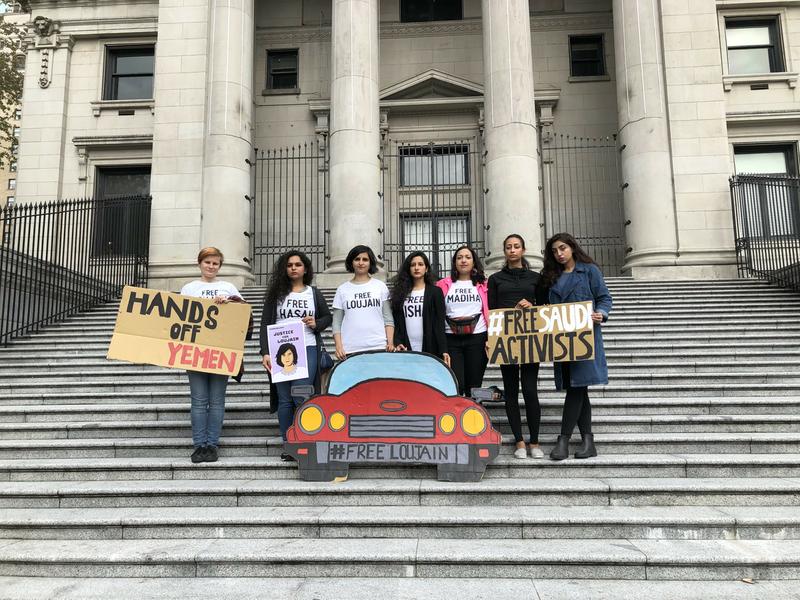 The event was also held for activists detained with her including Eman al-Nafjan, Aziza al-Yousef, Ibrahim Modeimigh and Mohammed al-Rabea. Zainab Fatima

More than a dozen people rallied in front of the Vancouver Art Gallery on Sunday afternoon in solidarity with UBC alumna Loujain Al-Hathloul and other women’s rights activists currently detained in Saudi Arabia.

Led by UBC alumni and friends of Al-Hathloul, the event was also in support of other activists detained with her including Eman al-Nafjan, Aziza al-Yousef, Ibrahim Modeimigh and Mohammed al-Rabea.

While a similar rally was held in May shortly after their arrest, the organizers felt it was important to keep public attention on their detainment.

“Even if [Loujain] was a stranger, if she was a woman across the word that I didn’t know about, or I hadn’t met, I’d still fight for her rights,” said one attendee.

“Our voices are a very powerful tool.”

Graduated in 2014 with a bachelor of arts with a major in French, Al-Hathloul is a prominent activist for women’s rights in Saudi Arabia especially for her support of women’s right to drive.

In 2014, she was detained for 10 weeks after live-streaming herself driving from the United Arab Emirates into Saudi Arabia. She was arrested again on May 15 — just over a month before the ban on female driving was lifted in the kingdom — along with a group of activists on unknown charges without access to a lawyer. They were described as “traitors” by pro-Saudi Arabia government media.

“This isn’t the first time that Loujain’s been arrested, but it’s different because it’s the first time she hasn't been able to have contact with the outside world,” said Narissa Diwan, one of the event organizers.

During the event, the attendees took photos with signs and sang “Courage,” a South African anti-Apartheid song. Atiya Jaffar, one of the organizers, said that her favourite line from the song is “We will walk with you” because it shows that the community stand in solidarity with the detainees.

The event organizers added that the assembly was hosted on September 23 to coincide with the Saudi National Day, bringing awareness to the human rights issue in the kingdom. They also discussed the humanitarian crisis in Yemen.

On August 3, after the Canadian government publicly criticized Saudi Arabia’s human rights record, the kingdom responded by expelling Ambassador Dennis Horak, freezing trade and investment with Canada and recalling all Saudi Arabian students who are sponsored by the government.

Foreign Minister Chrystia Freeland has so far maintained Canada’s support for the women’s rights activists, but has noted yesterday that she hopes to discuss the diplomatic breakdown with the Saudi Arabian Foreign Minister Adel Jubeir amidst UN meetings.

Moving forward, the event organizers and attendees want the Canadian community to continue fighting for their friend and the activists who are detained overseas.

“We are in awe of their courage and we are in solidarity with them,” said organizer Urooba Jamal.