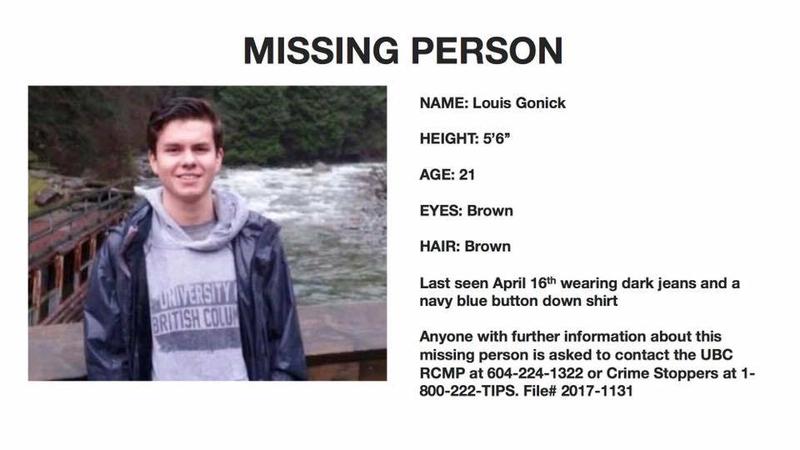 The UBC Ecuadorian Students Association (ESA) held a gathering in support of missing UBC student Louis Gonick outside of the Vancouver Art Gallery on Sunday afternoon. Gonick, a 21-year-old UBC student and VP Internal of the ESA, was last seen on the evening of Sunday, April 16 in the UBC area.

“We already posted a lot of posters around the city, but a lot of people don’t know what’s happening,” said Génesis Daniela Gallegos Marín, a first-year UBC student and ESA VP Events. “We just want to just show Vancouver [what’s going on] and just maybe someone will help save him.”

Supported by the Ecuadorian Association of British Columbia, dozens of UBC students and community members handed out flyers with Gonick’s picture and spoke to passersby about his disappearance. Organizers stressed that expanding the scope of the search beyond UBC will be essential to finding Gonick.

UBC students and community members are gathering outside of the Art Gallery to raid awareness of missing UBC student Louis Gonick pic.twitter.com/msoiwhko6d

“I feel that his friends have been pretty incredible throughout all of it, and the Ecuadorian students’ community as well,” said Geetika Bhasin, a friend of Gonick’s and fellow UBC student. “I’m just hoping that we can get awareness and that someone has seen him around.”

In addition to the gathering, the ESA has also organized a GoFundMe campaign to support Gonick’s family — who are coming from Ecuador to help look for him — with travel costs. As of this morning, the campaign has surpassed its $5,000 goal.

“We think that social pressure is very important because people are going to know more about what is happening and we can create an awareness of our friend who is missing,” said Gallegos Marín. “We just want to show our support to his family.”

While Gonick’s mother has not yet arrived in Vancouver, Gallegos Marín stressed that the gathering and fundraiser are about spreading the word and maintaining morale among his friends and family both in Vancouver and Ecuador.

“For the moment, we just hope that Louis is going to come home.”