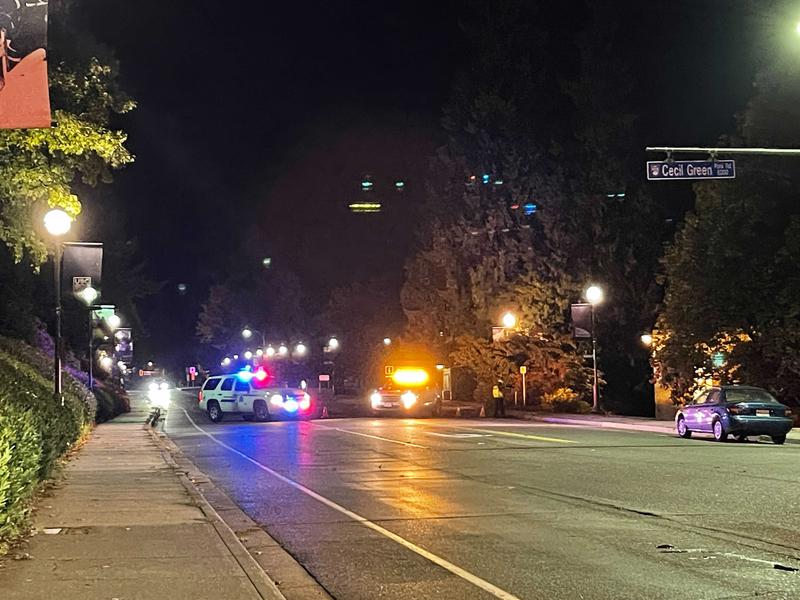 The RCMP were still blocking off NW Marine Drive around 9:30 p.m. as the car involved in the accident was parked on the side of the road. Isabella Falsetti

Update at 11:05 a.m. on October 5: In an email to The Ubyssey, RCMP Constable Ian Sim said that the identity of the pedestrian was still unknown, but that he had a broken leg. Sim also wrote that the driver had not been charged or arrested “at this time.”

The RCMP blocked off a section of Northwest Marine Drive between the Chan Centre and the Rose Garden Monday night after a car struck a pedestrian while they were crossing the street.

The accident occurred after the driver failed to stop for the pedestrian, according to an RCMP officer at the scene. The car that hit the pedestrian was parked along the side of the road and did not appear to have any noticeable damage at around 9:30 p.m. The road was also clear of debris.

Campus Security told The Ubyssey that the Vancouver Fire Department was called to the scene at 7:42 p.m. They would not say anything more on the matter.

The pedestrian — a male — sustained “some injuries,” but the RCMP officer did not provide any further details. “We are going to follow up with the person to see what kind of injuries exactly he received,” he said.

Whether or not the pedestrian was a student was unclear as well.

When asked if the driver of the car had been arrested, the RCMP officer said they were “still investigating.”

According to a message from Eshana Bhangu, the AMS vice-president academic and university affairs, two ambulances were at the site of the crash earlier this evening.

This incident comes a little over a week after two student pedestrians were struck and killed by a car along Northwest Marine Drive behind c̓əsnaʔəm house in the Totem Park residence area. Students have since set up a memorial nearby to mourn the victims.

This is a developing story and will be updated with more details when available.