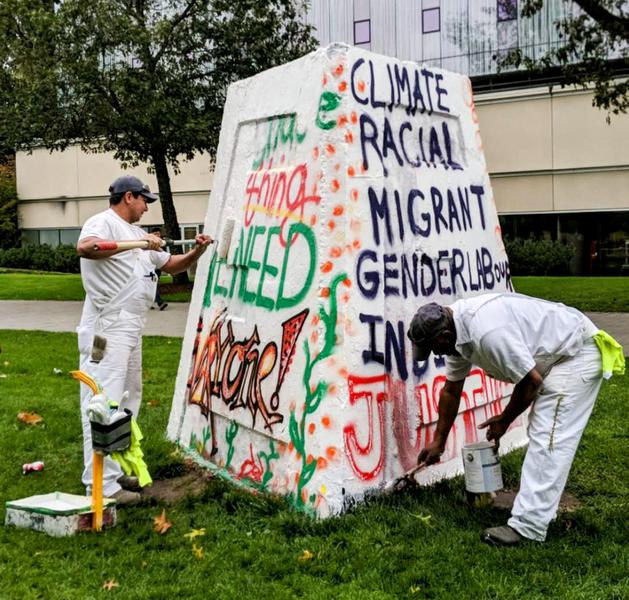 Jasmine Cui was walking to class when she noticed a UBC Building Ops van parked on the sidewalk and two men in uniform painting over UBCC350’s messages in white. Courtesy Jasmine Cui

When UBCC350 walked by the Cairn this morning, they found that their words of support for the Global Climate Strike had been erased by UBC Building Operations.

Pro-divestment and environmental group UBCC350 and the UBC Social Justice Centre painted the Engineering Cairn Wednesday evening in anticipation of tomorrow’s Climate Strike, which is expected to draw over 2,500 students. Though it is officially managed by the Engineering Undergraduate Society (EUS), painting the Cairn has long been a campus tradition for groups looking to raise awareness for their causes.

But less than 24 hours later, UBCC350’s messages promoting the strike and calling for climate justice were gone.

“I’ve seen this block of concrete dripping with coloured rain and peeling paint. I’ve seen it go weeks covered in swear words and hate speech. Just another layer on the Cairn,” wrote UBCC350 supporter and mechanical engineering student Adam Casey. “But never once in my four years on this campus have I seen UBC Building Ops repaint it. This was up for less than 12 hours. Shame on you UBC.”

At about 9:45 a.m. today, fourth-year political science student Jasmine Cui was walking to class when she noticed a UBC Building Operations van parked on the sidewalk and two men in uniform painting over UBCC350’s messages with white paint.

When she asked why they were repainting, they said they were following orders to remove “graffiti.”

“Obviously it wasn’t their decision to paint it, but they were told to,” said Cui. “[They said] they received a complaint and they referred to the paint on the Cairn as ‘graffitti.’” 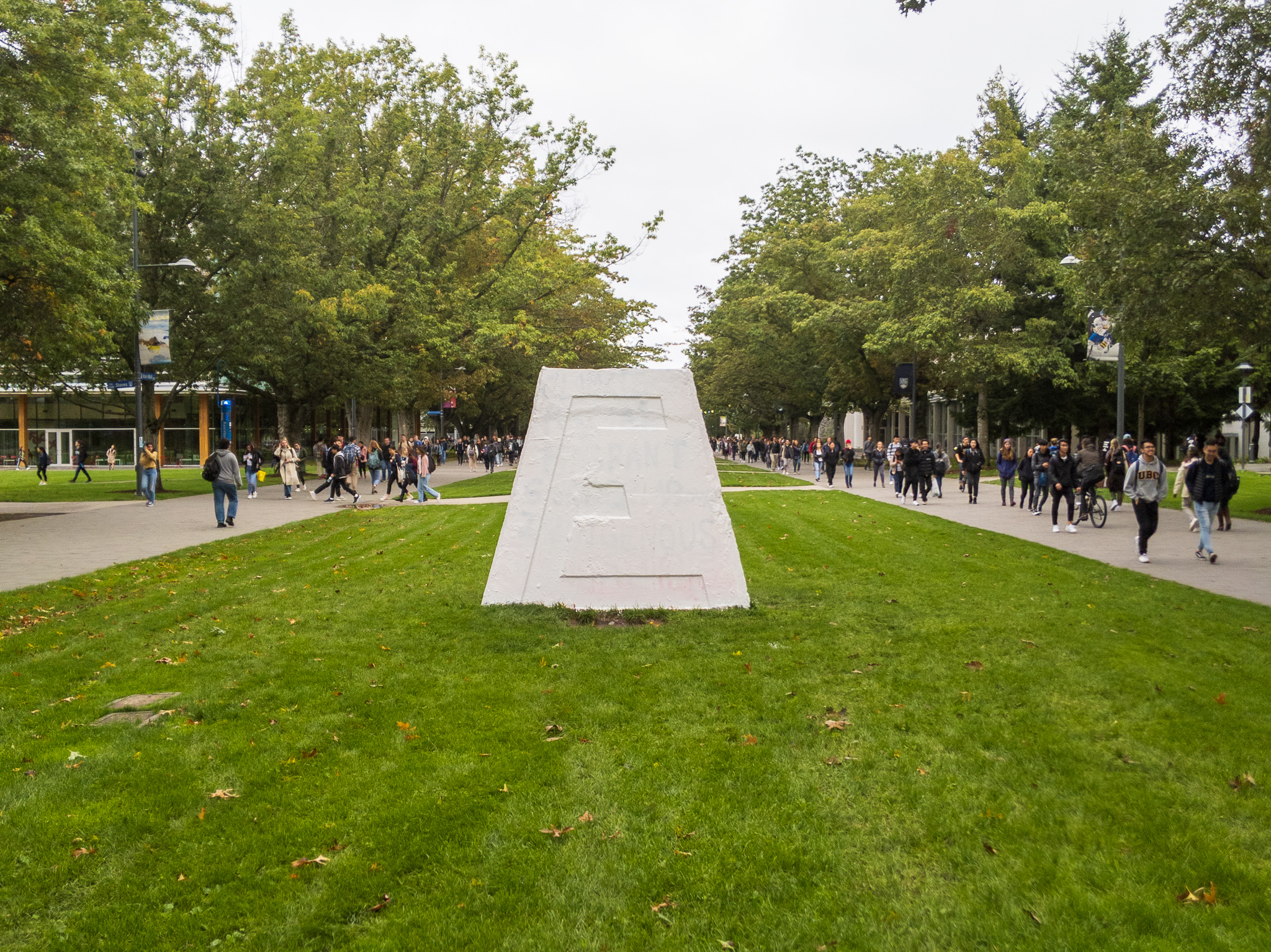 It is unclear why they painted over the whole installation, rather than only the words “racial” and “migrant.” Zubair Hirji

In a written statement to The Ubyssey, Mark Donald-Jones, the facilities manager for the red zone at UBC Building Operations, confirmed that they repainted the Cairn because they thought the messages were inappropriate.

“Building Operations, as the stewards of our campus infrastructure, routinely address graffiti in our buildings and public realm,” Donald-Jones wrote.

In this case, Building Operations determined the words “racial” and “migrant” were problematic.

“Given the lack of context, [a Building Ops employee felt] that it could be interpreted by some in the community as offensive,” said Donald-Jones.

Donald-Jones said Building Operations’ intention was not to discourage or silence the strike.

“A decision was made to repaint the cairn for that reason and that reason alone. It’s regrettable this is being interpreted differently.”

It is unclear why they painted over the whole installation, rather than only the words “racial” and “migrant.”

It's also far from unheard of for the Cairn to be painted with inappropriate, even harmful, messages. Before UBCC350 painted it, the Cairn was covered in vandalism and sexual messages that reference Simon Fraser University.

“I think it’s really disgraceful that this message was taken down so swiftly when hate messages have been left out there for much longer,” said Gabby Doebeli, a UBCC350 member and co-chair of the UBC Social Justice Centre.

For Doebeli, painting the Cairn was about expressing their passion for climate activism artistically.

“[Painting the Cairn] was part of us showing up on campus and making some beautiful art and really finding joy in what we're doing,” she said.

But it was also about spreading the word of the climate crisis and how it especially harms marginalized people.

“[We wanted] to get our message across and I think we did in a very respectful and beautiful way,” said Rachel Cheang, a third-year human geography major and member of UBCC350. “Our message was clear. We wanted people to know there was a climate strike going on.”

EUS President Tyra Phillips clarified that the EUS did not request or support Building Operations repainting the Cairn, a job usually left to the EUS Keepers of the Cairn.

“It’s an unusual situation for sure,” Phillips said in an emailed statement to The Ubyssey.

Jeanie Malone, a student representative on the UBC Board of Governors (BoG) and a former EUS executive for several years, posted on Facebook that UBC Building Ops repainting the Cairn is virtually unprecedented.

“[F]or all my years in the UBC Engineering Undergraduate Society, the only time we ever had BOPS involved was when it was particularly offensive and someone had tweeted at Santa,” wrote Malone.

“I hope the EUS is able to clarify ownership/care of the Cairn. I, of course, never encourage vandalism of our beloved Cairn... but we were always respectful about keeping it up if the message was important (and/or if the art was cool, or if it was raining too much to paint). There’s a long history of Keepers of the Cairn and I would hate to see that lost.”

The AMS is also standing beside UBCC350.

“The AMS is disappointed to hear that the Climate Strike messages on the Cairn were painted over by UBC,” wrote President Chris Hakim in a written statement to The Ubyssey. “Our community recognizes that climate charge is an alarming issue that needs immediate action on [sic], and it is critical for UBC to acknowledge this and work with our community on this important topic.”

Despite the sudden painting over of their message, UBCC350 members are hoping the Climate Strike will draw a huge crowd of support tomorrow. And the Cairn has already been repainted with UBCC350's message, though they don't know who did it. 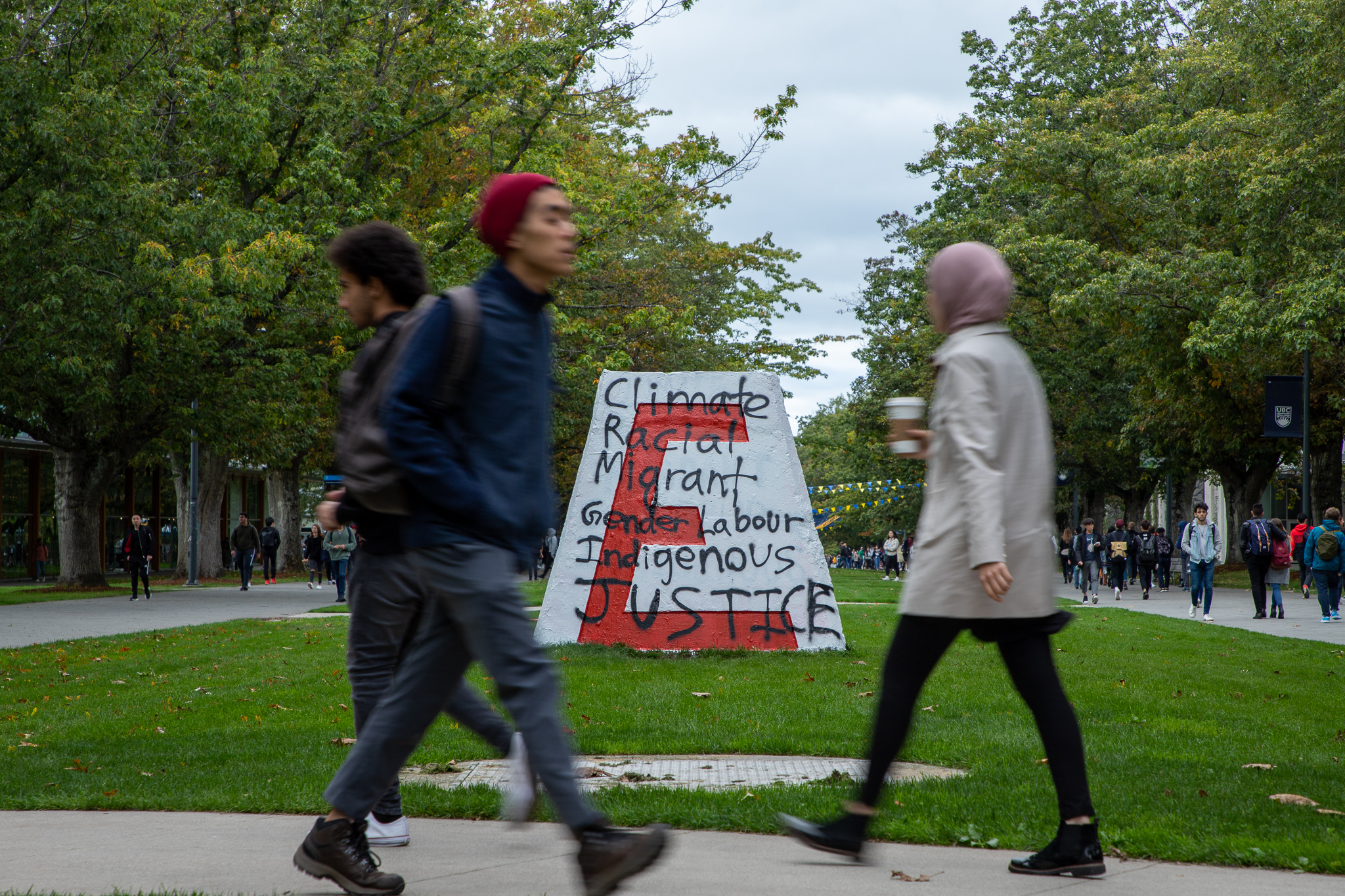 “I think this is also exactly the reason why we need more people to be at the strike,” said Cheang.

“We’re not going to let this silence us and we're going to make sure that our demands are being heard this Friday — loud and clear.”

UBCC350 member Rachel Cheang is an illustrations contributor to The Ubyssey.

This article was updated to reflect that the UBC Social Justice Centre assisted in painting the Cairn and to clarify that the group that repainted it on Thursday in support of the Climate Strike is unknown. It has also corrected the quotation of the original painting.