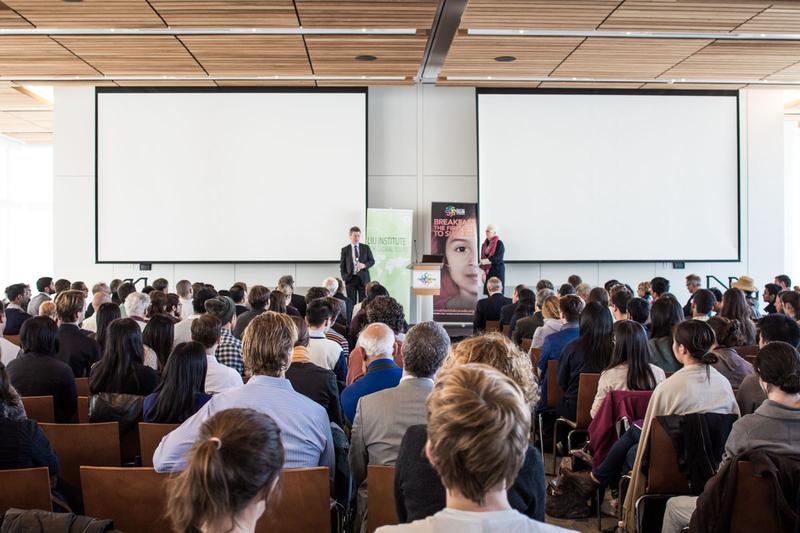 The main event was a discussion about the first world’s neglect of both the environment and of the billions of people living in poverty. Photo Samantha McCabe / The Ubyssey

Forty-five minutes before Jeffrey Sachs took the stage at the Alumni Centre, the room was already buzzing with anticipation. Sachs — dubbed a “visionary economist” by Vanity Fair and others — was speaking at UBC on sustainability and global change.

“I’m having a great day, I have to tell you,” Sachs said to open his talk after thanking the various people involved in the event. He then went on to describe how he woke up in Beijing that morning and “went for a nice walk” before hopping on a plane to Vancouver. A jam-packed schedule seems to be a consistent in Sachs’s life.

Sachs quickly launched into the main event: a discussion about the first world’s neglect of both the environment and of the billions of people living in poverty.

Sachs is so passionate about the United Nations Sustainable Goals — which include “[ending] poverty in all its forms everywhere” and protecting the environment — because he played a huge hand in creating them.

Sachs described Canada and the United States as in a period of greed, focusing on money and power when we should be focusing on “the economics of happiness.” In other words, as the countries with the most power to incite change, we need to get a better sense of morality and help out the rest of the world.

UBC could be at the forefront of that change as the first university in Canada to implement a sustainable development policy. According to sign in the Alumni centre, "UBC seeks to learn and live in ways that improve human and environmental well-being and move beyond reducing damage and harm.”

And students are a big part of that potential.

“I think that students are getting really energized all over the world to say we can, and have to, make a big contribution to change the direction of the world towards sustainable development,” Sachs said in interview with The Ubyssey.

Economically, Sachs said, "[It is] quite realistic to think about ending extreme poverty.”

Over the course of his talk, Sachs became increasingly passionate. According to his macro-economist philosophies, we have the tools for change — we just need to use them.

The talk was put on by the Lind Initiative, the Liu Institute for Global Studies and the Breakfast Club of Canada. In addition to professors and alumni, many interested students showed up to hear Sachs speak.

What advice does Sachs have to give to those looking to follow in his footsteps and instigate real change? “Be persistently obnoxious, which I am definitely ready to be.”

Students in the audience appreciated the speech. “It’s an application of what you’re actually learning,” said Melissa Parlor, a third-year student of economics at UBC and attendee of the event. “You actually get to see what is going on in the real world about it.”

“Especially with midterms coming up at the moment ... it’s good to have something that inspires you to learn,” said James Gig, another third-year economics student.

This year’s Lind Initiative continues its efforts with five more talks in the coming weeks. The speakers will include notables such as next week’s former senior editor for The New York Times, Jill Abramson.