Schedule changes may cause Sauder students to take Friday classes 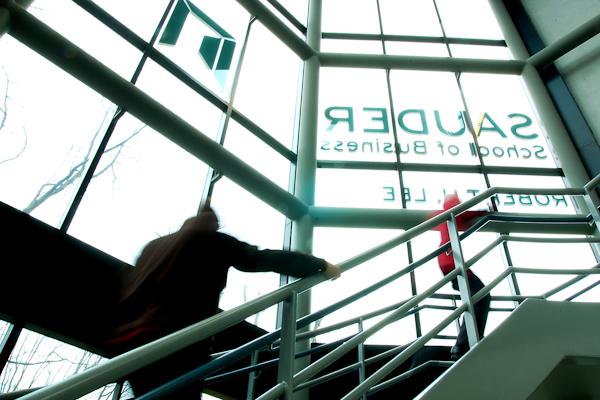 Some Sauder students will soon have to give up their no-class Fridays.

By adding classes on Fridays, Sauder is aiming to optimize classroom space within the Henry Angus building, as well as accommodate the continuing growth of the Commerce faculty.

“Our programs have been growing over the years, and we are essentially running out of classroom space,” said Pamela Lin, Sauder undergraduate program assistant dean and director. “By scheduling classes to include Fridays, it allows us to increase capacity by about 25 per cent.”

Lin also said that the scheduling of Friday classes means that fewer courses will be scheduled on evenings and weekends. Additionally, the new scheduling doesn’t restrict Sauder students from taking certain electives and arranging their schedules to not have class on certain days.

“If students think ‘oh I’m just going to try to avoid taking classes on Fridays,’ then they’ll probably not look at any electives that meet on Monday-Wednesday-Fridays,” said Lin.

By including Friday classes, this can increase Commerce student initiative to take electives with Friday classes. That said, the inclusion of Friday classes could be disruptive for students who could use the extra day for schoolwork, projects, extracurricular activities or family time.

“Sauder students are very busy and they have so many commitments, so Friday was just a really great day to get things done,” said second-year Sauder student Tina Tsai. “In Sauder there are group projects, and people have different schedules. It’s very hard to find a time and a day to meet up together to work on our projects, so having the whole Friday to work on our projects together was really convenient.”

Still, Tsai pointed out that the revised schedules can be of some benefit.

“I think they made the change so that it fits people's schedules better,” she said. “There are a lot of students and different conflicting schedules.”

According to second-year Sauder student Kimberly Wong, the addition of Friday classes might also be problematic for students who used the extra Friday and Thursday nights to attend networking events.

“There were conferences where I would go to if it was on Friday and that was kind of nice. I didn’t have to worry about other courses being in the way, or missing them," said Wong. “If there’s a big networking event or something they wanted a lot of students to go to, then they’d know they’re not crushing half the students' dreams.”

As a result of the scheduling change, events such as conferences, networking events or non-academic programming may have to be pushed into the evenings or weekends.

Despite this, Wong pointed out that the inclusion of Friday classes may be beneficial for students who had to take classes from other faculties on Fridays anyway.

"I have friends that will come to school on Fridays just for one class, so for them, I’m sure they would like the change," said Wong. "It doesn’t seem worth it to come for one hour, but they still have to because it’s school.”