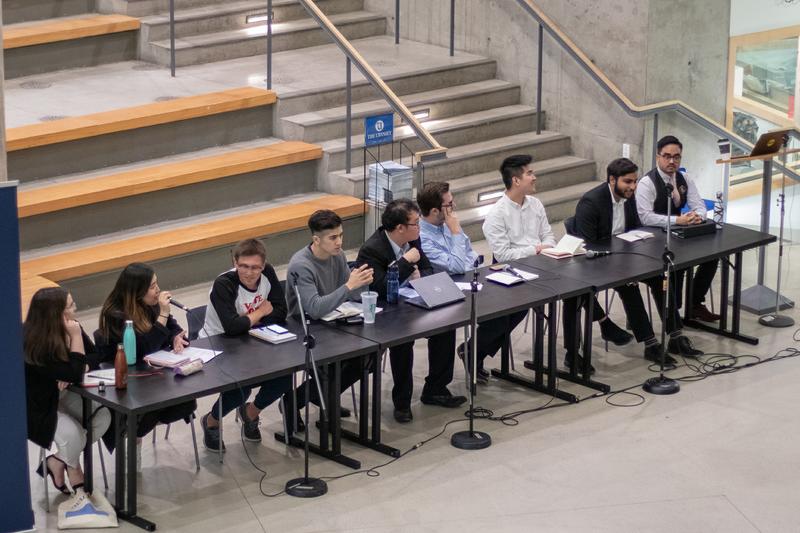 In the crowded race, candidates were first asked what makes their platform unique. Zubair Hirji

Senate candidates faced off for the last time on Friday to discuss Senate reform, student consultation and fall reading break at the Great Debate.

Many also dodged questions in open debate, deferring to speak about their own past experiences instead of providing actual answers.

In the crowded race, candidates were first asked what makes their platform unique.

“I’m not just talk,” said Holmes. “I’m someone who has actually gotten tangible results within a bureaucratic setting.”

But candidates with less direct Senate experience said they want to change the status quo. Burnham, for example, said she wants to see an increase of diversity among Senate members.

“I was really surprised by how old, male and white everyone in that room was,” she said. “It’s time for radical change within its membership.”

The rest of the candidates focused on how they would consult with students. Candidates like Ty and Chai drew on past experiences with the Science Undergraduate Society, while Ho and Quadre gave generic answers about committing to student representation.

“I admit I am not the most experienced candidate,” said Ho.

Holmes was quick to point out other candidates’ lack of experience in the open debate, asking how many Senate meetings they had actually attended.

Clarke admitted he had not gone to a single meeting but said he wants to increase awareness of Senate goings-on among students by writing summaries for The Ubyssey.

Hakim said he had missed “two or three” meetings. There have only been six Senate meetings so far this year.

The next question asked candidates what their top priority was — aside from implementing a fall reading break, which has often been a buzzword among Senate hopefuls.

“Some [faculty senators] sit there for decades and still don’t get work done,” said Ty, comparing their terms to the short one-year seat student senators hold. He called for limits to combat Senate sluggishness.

Quadre, Hakim and Go all brought up student engagement, but Quadre avoided mentioning any specific details.

Hakim’s focus was Indigenous engagement. He called for the establishment of an Indigenous working group for the Senate admissions committee.

Ho’s plan for student engagement centred on reviewing the student evaluations of teaching which he said hasn’t been touched since 2007.

Clarke addressed co-op program policy, but his answer meandered as he agreed with Pang's classroom goals and doubled back on his past experiences.

For Chai and Burnham, reforming the awards policy was their top priority.

Chai’s response was general, focusing on award accessibility and transparency in how they are adjudicated. Burnham went more in-depth to explain how she wanted to expand awards criteria. She explained that despite a decrease in the minimum credit requirement for awards consideration, summer credits still did not count.

“[It’s] quite an issue when you consider how many students take a summer course if they have to take a W, or just really did not anticipate that they would have a rough semester mentally,” Burnham said.

Candidates were then asked what Senate policy they thought should be reviewed.

Pang said he wants to strengthen the classroom scheduling policy, while Clarke again call for reform to co-op guidelines.

Hakim addressed the “Admission for British Columbia Youth in Care” policy, saying that senate needs to support students from underprivileged communities. Burnham agreed, crediting student senator Matthias Leuprecht for bringing more attention to this issue at Senate this past year.

Other candidates struggled to name specific policies, instead speaking on governance reform.

Ty stressed the importance of an external governance review, citing the recent change to the elections timeline after it was discovered that the provincial University Act had been “violated for over a decade.”

Quadre repeated what Ty had said immediately before him. Ho was unable to answer in specifics beyond that, instead talking vaguely about mental health and revisions to the syllabi policy which was already updated last year.

Drawing on his experience once more, Holmes said that other candidates were incorrect to focus on review because “most policies don’t apply to the governance of Senate.” He said that rules and procedures are reviewed triennially by a committee that more experienced senators often sit on.

“I think it might be nice to have some candidates talk about … how they’re going to lead [governance review] if they don’t have a seat on the nominations committee next year,” he said.

In open debate, Ty said he could push for reform despite not being on the right committee.

“It doesn’t mean that I can’t actively influence it,” he said. “I could … actively try to change the system rather than sitting on my ass.”

In audience question period, Holmes and Burnham dominated the conversation.

They stressed the importance of consulting with graduate students on fall reading break, and continued to speak up to respond to a question on Senate efficiency.

Candidates like Quadre and Clarke remained silent throughout. Ho stumbled while discussing a review of the student evaluation policy.

At the end of the debate, candidates briefly mentioned open educational resources, mental health and student consultation that were lost throughout the debate as candidates spoke on their experience and their opponents’ lack of it.

Given the obvious divide between candidates with experience and newcomers, Ty stressed his ability to learn if elected.

“I want to learn quickly and fast,” he said.

But other candidates like Quadre and Ho were confused and failed to address the experience gap. Clarke also didn’t discuss much else than co-op guideline. All three fell behind more outspoken candidates like Holmes, Pang and Burnham.

Burnham concluded the debate by stressing the need for student consultation.

“There’s a lot of shake up that needs to happen within the Senate this year,” she said.

— With files from Charlotte Alden