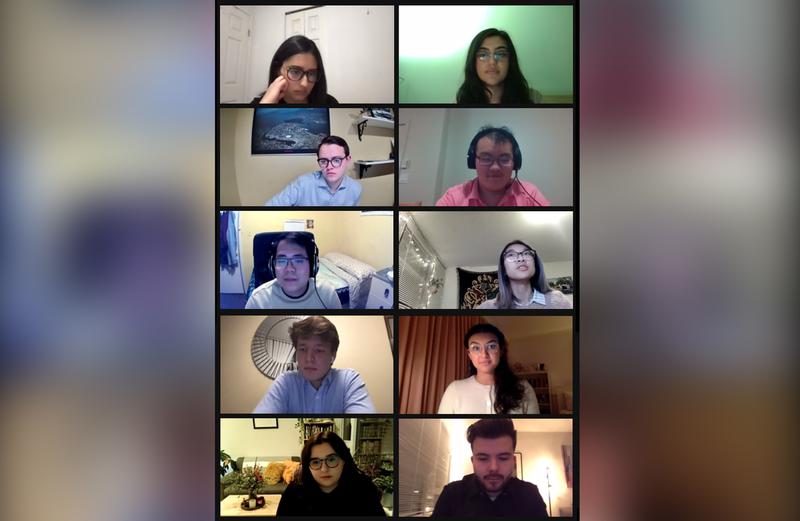 The Senate needs to increase transparency, candidates agreed, but differed on how to increase student engagement with the body. Jasmine Foong

In the first AMS debate, ten candidates for five senator-at-large positions found consensus on issues of transparency, but newcomers slipped up occasionally on policy.

The packed Zoom call featured a mix of new and returning candidates. Julia Burnham, Eshana Bhangu and Cole Evans are each seeking re-election as senators-at-large, while Dante Agosti-Moro and Anisha Sandhu are looking to transition from their faculty-specific senator positions. Emmanuel Cantiller, Mathew Ho, Damir Korniiashik, Georgia Yee and Shivani Mehta are all first-time candidates.

In response to a question on which goal of the Student Senate Caucus’s newly-released goals for the new triennium they would prioritize in their advocacy, candidates discussed exam hardship, equity and online learning for international students.

Mehta and Cantiller focused on exam hardship. Mehta advocated for more compassionate exam times for international students studying remotely, while Cantiller said the rules prohibiting students from having three final exams in one day should apply to midterms.

Korniiashik voiced the same concerns for international students as Mehta, arguing that accessibility for those in other countries must be included in any hybrid learning plan for the fall 2021 semester. He also said multiple times throughout the debate that he wants to make UBC the top-ranked university in Canada.

Incumbents Burnham and Bhangu spoke of improving equity through Senate 2023. Bhangu, who spearheaded the goal-setting document, called for an equity audit of the Senate.

“I think it is essential that we take these steps and to be in line with the university’s goals of actively working towards becoming an anti-racist institution,” Bhangu said.

Agreement on transparency issues, dissent on how to address them

Candidates heatedly discussed accessibility and transparency of the Senate — with Mehta first commenting that Student Senate Caucus’s goals were inaccessible themselves, buried within Senate meeting minutes.

Senate needs to increase transparency, candidates agreed, but differed on how to increase student engagement with the body.

“A lot of students are already like ‘What is the Senate’,” said Yee at one point.

“Platforms are changing so rapidly … One day it will be Facebook, then Instagram, then Discord, and it just goes on and on,” Mehta said.

Instead, Mehta suggested that Senate invest in a new website. Burnham responded that student senators were volunteers and lacked the funding and resources to undergo such a project.

Bhangu expressed similar sentiments, stressing that the Student Senate Caucus dedicates “hundreds of hours” unpaid work to represent student interests despite the existence of paid advocates within the AMS and GSS.

“Volunteering is a privilege. That means that financial security is not your priority … Student advocates that are leaning more towards staff positions are maybe more concerned about paying their tuition ...” Mehta said.

Ho called the Senate’s communication issues structural, noting that the body has not released any meeting minutes since September. Evans agreed with Ho, adding that he often struggles to find committee meeting minutes despite serving as chair of the academic buildings committee.

Agosti-Moro called out the incumbent over his failure to release his own committee’s minutes.

All of the candidates agreed that the Senate has not done enough in this area and that the Indigenous Strategic Plan (ISP) is necessary for university-Indigenous relations to improve.

Burnham said the ISP needs to be endorsed by the Senate.

In open debate, Agosti-Moro also questioned Cantiller on his suggestions regarding the Indigenous Strategic Plan — suggestions that Agosti-Moro said might require an amendment of the University Act. He asked how Cantiller would go about getting that amendment by the BC Legislature.

Cantiller was unable to respond effectively, repeating himself multiple times.

He also suggested that the Senate lower the barriers in the application process, but did not provide details on how to do so.

Yee agreed with Bhangu’s points, but said that there must also be a “heavy emphasis on retention so as not to tokenize the [Indigenous] community” — to which Evans agreed.

Evans urged candidates to be careful when talking about hitting targets, doubling enrollments, or creating programs in order “not to tokenize Indigenous people as just numbers on a paper.”

“We need to be able to develop holistic approaches that are based on how we are encouraging Indigenous people to come to the University, rather than just trying to hit targets. It doesn’t actually do anything meaningful,” Evans said.

Bhangu challenged Evans, saying some of the university’s efforts on Indigenous support have lacked accountability.

“Let’s not understate the data and understate accountability when it comes to acting for Indigenous students.”

The Senate candidates will take the stage again at the Great Debate on Saturday, February 27. This article is part of our 2021 AMS elections coverage.