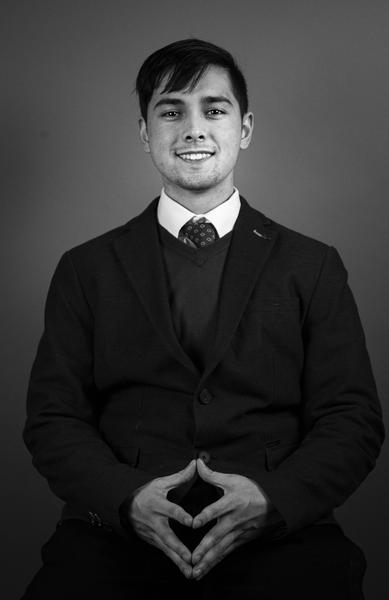 If elected, he hopes to work to improve UBC lecture equipment and continue to push for lecture recording. Sophie Galloway

First-year commerce student Braden Bellinger is running for one of the five student senator-at-large seats on a platform of improving the classroom experience.

Bellinger is currently the VP of the House Council for Robson and Okanagan houses in Place Vanier Residence. He’s also a CEO for a start-up marketing agency, a project with a couple of other Sauder students.

If elected, he hopes to work to improve UBC lecture equipment and continue to push for lecture recording.

He spoke about his Math 104 class, where the professor used a chalkboard instead of a projector, making the lesson less accessible to people in the back of the room.

“I’m hoping for classrooms with chalkboards, they can get projectors,” Bellinger said. “I think that can make a really big impact at the very least.” He also wants to increase the prevalence of microphones for lecturers in big lecture halls.

As for lecture recordings, Bellinger cited examples of people in his classes who missed lectures due to illnesses and family events.

“What sucks for them is it’s midterm season right now and the questions were like, ‘Answer these questions that were from the lecture,’” he said. “I don’t really think that’s fair.”

Bellinger is also interested in improving communication between teaching assistants and professors. But he did not clarify how he would make that change in the Senate.

“The teaching assistants, they don’t know what’s going on in the lecture,” he said. “I feel like we can get a lot more out of it if they know the specific details that the profs expect us to know.”

He also criticized Canvas, especially the discussions tab and the lack of anonymity.

“That makes students a lot more [shy] to post questions because it has their name on it … that small change could make the discussions tab more relevant and more useful.”

But he acknowledged that this would be a difficult project.

“It’s not entirely controlled by UBC, to my understanding,” Bellinger said. “So we’ll have to take a lot of advocating to convince UBC and then convince that company to make a change. It’s a very bureaucratic process, which is why I think it’ll be a slow process.”

When asked what initiative that Senate is currently doing that he agrees with, he said the UPass. But the UPass is a project of the AMS VP External, not the Senate.

When asked what policy within the Senate needs updating, he said that “nothing [came] to mind.”

In the debates, Bellinger often didn’t fully answer questions and echoed the statements of those around them. He acknowledged that he would likely be viewed as inexperienced, if elected.

But he said that he has “a lot of leadership experiences that can back [him] up” and hopes to gain more leadership skills in the role.