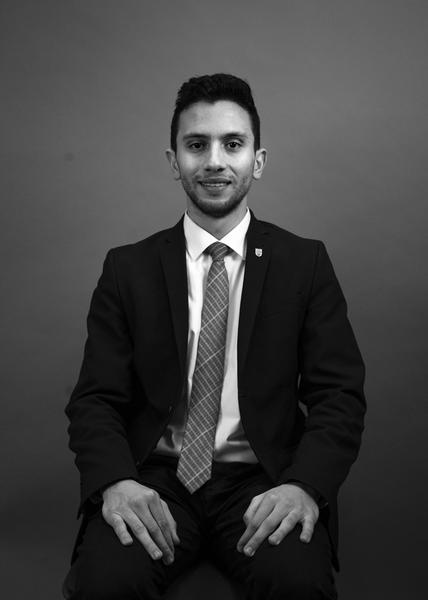 Borno says his commitment to minority students sets him apart from his competitors. Diego Lozano

Mahmoud Borno wants to be a voice for minority students.

He’s running on a platform that includes supporting marginalized groups and pushing for academic policy changes.

Borno was inspired to run after participating in several Middle Eastern student associations and becoming the current president of Colour Connected Against Racism, an AMS resource group.

Like many newcomers to the Senate race, Borno’s grasp on Senate policy and purview is shaky. He wants to create an ethics committee to oversee UBC’s research investments — though some oversight already exists outside the Senate under the VP Research & Innovation portfolio — and he struggled to talk about a specific policy he would like to see reviewed.

But Borno says his commitment to minority students sets him apart from his competitors.

“I’m not a politician,” he said. “I’m running based on the demands of the minority students on campus, something that’s usually underrepresented on the university level.”

He wants to advocate for Arab and Muslim students by encouraging a Middle Eastern and North African studies program, increasing the number of Arabic and Farsi courses and expanding the exchange program to include schools in countries like Lebanon, Egypt and Tunisia.

Borno also wants to see the construction of a multi-faith prayer room. Currently, Muslim students can pray at Brock Hall during the week or the Marine Drive ballroom on Fridays. But he says the space isn’t adequate and that Friday prayers often attract upwards of 100 people.

“A lot of Muslim, brown and Arab students are always underrepresented as a minority. We’re always offered solutions without being consulted,” he said.

“It’s like, ‘Okay, here you go, be happy about it,’ when in reality whatever solution or accommodation we’re offered doesn’t really work out, such as when they offered the Muslim community Brock Hall prayer room — but it’s more of a prayer closet.”

Borno wants to petition for an Indigenous seat on the Senate, though it should be noted that membership on the Senate is dictated by BC’s University Act.

“What I notice a lot that happens within university spaces is performative actions to accommodate the Indigenous students on campus … where they offer them the bare minimum to appease themselves as settlers and not to really accommodate or listen to the Indigenous population on campus,” he said.

His academic priorities include pushing for a revised exam clash policy and extending the add/drop deadline.

“I’m taking their concerns and their demands to the floor of the Senate and trying to address [them] because what makes our university is our students.”