Senate Summed Up: EDI proposals referred back to committee for lack of Indigenous consultation 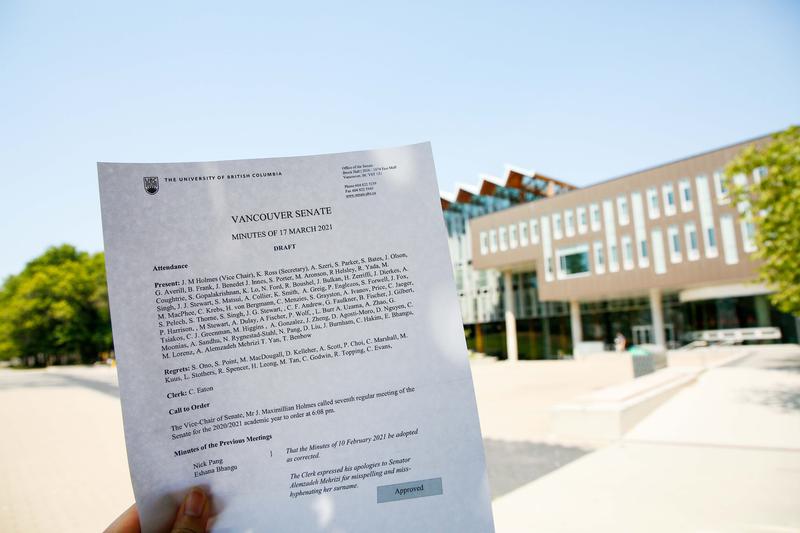 The UBC Vancouver Senate met on Wednesday night to discuss potential changes to Senate procedures on equity, diversity and inclusion and COVID-19 on campus.

The Senate referred two motions focusing on equity, diversity and inclusion (EDI) back to the Nominating Committee due to concerns around lack of Indigenous consultation.

Introduced by Dr. Paul Harrison, the first motion would require all standing committees to consider EDI as part of any future decisions or recommendations. The second motion proposed the creation of a new standing committee for EDI.

Dr. Jan Hare, dean pro tem for the faculty of education, asked if committee members considered the critiques of using the term equity when focusing on Indigenous priorities.

She explained that the term equity was criticized because it can limit the potential for Indigenous people to improve their “social position” in the institution based on their priorities.

“Perhaps it's really Indigenous viewpoints on the institution that really distinctively can challenge normative and these dominant kinds of structures,” she added.

Harrison responded that although that point was made in committee discussions, it wasn’t discussed at length. “The intention is to use this as a starting point to alert all of our committees to some of their added responsibilities, and to see how discussions evolve in the next two years,” he said.

Dr. Charles Menzies, professor of anthropology, echoed Hare’s concerns and said the focus on “liberal ideas of individual fairness and equity and inclusion” and the desire to create a separate committee on these ideas goes against parts of the Indigenous Strategic Plan.

“The [notion] was rather than siloing these kinds of concerns in ... a corner off to the side, that they should become intrinsically part of the entire operations of the entire Senate procedures. And I actually think it's notable that there's a complete absence of the word decolonization,” Menzies said.

Hare and Menzies referred the motion back to the Nominating Committee for further consultation with the Indigenous community at UBC.

“I really think that careful conversation needs to happen that includes other Indigenous folks, other than just myself … I think it warrants a conversation with some of our Indigenous community about how we want to see Indigeneity, decolonization, these kinds of priorities that reflect the Indigenous Strategic Plan and priorities of sovereignty,” Hare said.

Discipline coming for those who don’t abide by vaccines processes

“As you know I'm not allowed to share numbers, but I see numbers on a regular basis and there are a few cases of COVID positivity in our population and we're very, very fortunate,” Ono said.

As of October 19, 95 per cent of students, faculty and staff had declared their vaccination status. Ninety-six per cent of those who declared said they were fully vaccinated, two per cent declared that they are partially vaccinated and 1.15 per cent chose not to disclose their status, either because they did not want to share and/or they are unvaccinated.

Ono said that UBC sent targeted messages on September 27, September 28, October 4 and October 6 to community members who “have not completed their declaration, or had not provided proof of vaccination or hadn't registered for rapid testing.”

He added that people who are unvaccinated or chose not to disclose their vaccination status received targeted messages to schedule rapid testing appointments. Those appointments have begun.

“A message will be sent on Thursday, October 21 for those faculty who have not uploaded proof of vaccination, indicating the continued noncompliance will lead to progressive discipline,” Ono said.

A separate message will be sent this week to students who have not declared either vaccination status or uploaded proof of vaccination, expressing that “continued noncompliance, will result in significant consequences for those students to be elaborated later,” he added.

“Those who have submitted incorrect or fraudulent documentation will be contacted directly with a letter of expectation. As part of this process, audits of proof of vaccination have begun,” Ono said.

Menzies asked if UBC would terminate faculty or staff members who do not disclose their vaccination status. Ono said the university would not terminate community members for not disclosing but was looking into what measures it would take.