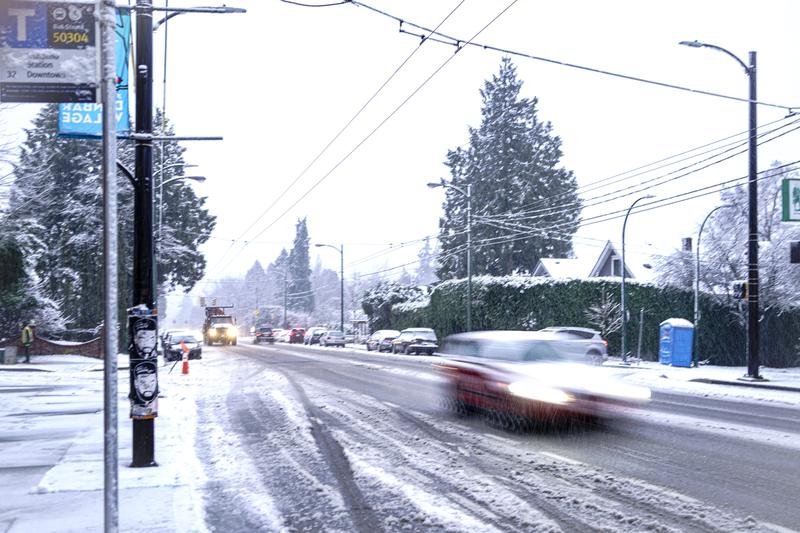 While UBC cancelled classes for January 15, many staff members who work in essential services were still expected to head to work since the campus remained operating as normal. Elizabeth Wang

As more snow falls over UBC many commuters are seeing greater delays on their travels to and around campus.

While UBC cancelled classes for January 15, many staff members who work in essential services were still expected to head to work since the campus remained operating as normal.

According to a UBC media release published on January 13, the decision on whether or not to declare a snow day is debated among many representatives across campus, including UBC Building Operations, Safety and Risk Services, the Provost and Vice-President Academic's Office, Human Resources, Campus and Community Planning and Media Relations.

Despite these processes, many still commented that campus roads and sidewalks were blocked and icy.

r/UBC user sushi-suspect wrote that in the Acadia/Fairview area “the lack of snow removal and ice prevention is really not great.

“UBC has salt at the commonsblock that we can get for outside our units, but the "streets" are poorly cleared. They have golf cart plows that come through but they almost make things worse when the underlying layer is ice,” they added.

UBC Building Operations’ Campus Snow and Ice Management Plan has a map to identify primary roads and sidewalks for priority snow clearing. But roads leading into campus including Southwest Marine Drive and Chancellor Boulevard are identified as being outside of UBC’s jurisdiction.

Transit to UBC also saw multiple delays on January 13, 14 and 15. According to a report from CTV Vancouver, TransLink announced over 140 bus service alerts on January 15 alone.

“During snow conditions, we ask customers to build in some additional travel time and stay up-to-date with transit alerts,” said TransLink spokesperson Ben Murphy. “Given we are running snow level service, students may experience longer than usual wait times on some parts of the system.”

On January 15, TransLink released a statement asking travellers to stay home if they can, or try to travel outside of rush hours as heavy snowfall would make commute times significantly longer than usual.

r/UBC user blackandwhite1987 wrote that taking the R4, “was fine, no noticeable difference from [their] usual commute.”

Others are seeing bus delays, stating over an hour added to their commute times.

“I live in North Van and what usually takes me about 1h40 is now a painful 2h20,” said r/UBC user fakebaguette, further explaining they witnessed large delays for the 44 bus.

The BC Ministry of Transportation has also warned drivers to use extra caution while driving and to stay off the roads if possible.

According to r/UBC user blackandwhite1987 who drove to campus, “the 5-block section of Argyle drive and 57th street before Knight street took about 30 minutes to get past, [instead of] about 10 minutes.” Furthermore, they ran into troubles on Marine Drive.

“It was an absolute nightmare, slippery and still hasn’t been plowed or salted. I’m really surprised there haven’t been a bunch of accidents along there,” they commented.

“The constant mission impossible vibes that come with just walking on campus is no fun either,” added r/UBC user fakebaguette.