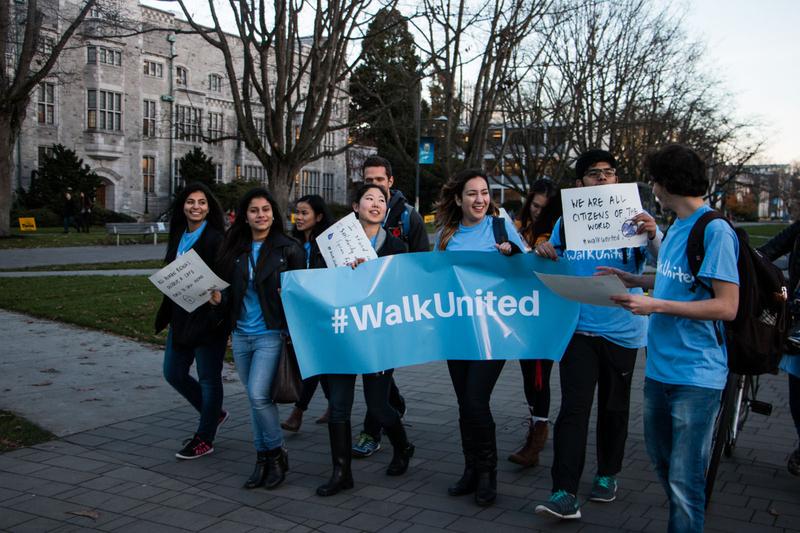 WalkUnited is a student-run UBC walk fundraiser to support and create awareness for Syrian refugees. The march was held on Main Mall.

Despite the cold weather, participants were excited to demonstrate their solidarity with refugees as well as spreading awareness of the cause to the UBC community.

“I’m here because I feel deeply for this cause and I’ve seen the troubles the Syrians are facing, especially the children,” said second-year student Zuhur Cader. “I want to help in any way I can to improve the situation.”

To raise money, the organizers sold $5 painted t-shirts to be worn at the event at Main Mall to show that “we walk united with refugees.” All funds collected will go towards Canadian branch of the United Nations High Commission for Refugees (UNHCR), a department of United Nations that deals with refugees.

The second part of the project was the photography portion, where organizers aimed to collect photos of 10,000 UBC students along with signs written with solidarity messages. They aimed to show that UBC students are passionate about the issue as well as to send messages to Canadian officials and the world about accepting refugees.

“The goal was basically to give an easy way for UBC students to be able to help out and contribute either by time or money to something really worthwhile, rather than just discussing it academically, and put efforts into actual actions,” said Nika Moeini, head organizer of WalkUnited.

According to Moeini, she expected the fundraiser to raise $500 for the cause and gather a large turnout during the event.

WalkUnited raised over $350 for the UNHCR and took over 200 photos of UBC students. Moeni said that the group will continue to fundraise until the end of the month and do collaborations with other clubs on campus.

The idea of the two-part fundraiser provided a solution for the problem of how to both raise money and allow students to engage with the issue in an active manner. “I thought doing a fundraiser by mixing it with advocacy ... might be the best way to solve this problem,” said Moeini.

Moeini thought that the project was an effective way to fundraise. “I think by making it accessible — by having a specific date, time and specific item to purchase — it makes it easier for people to actually do something,” said Moeini. “People will be able to remember that there’s so much more out there and also remember that — although we’re far away — as passionate students, we still have abilities to help.”