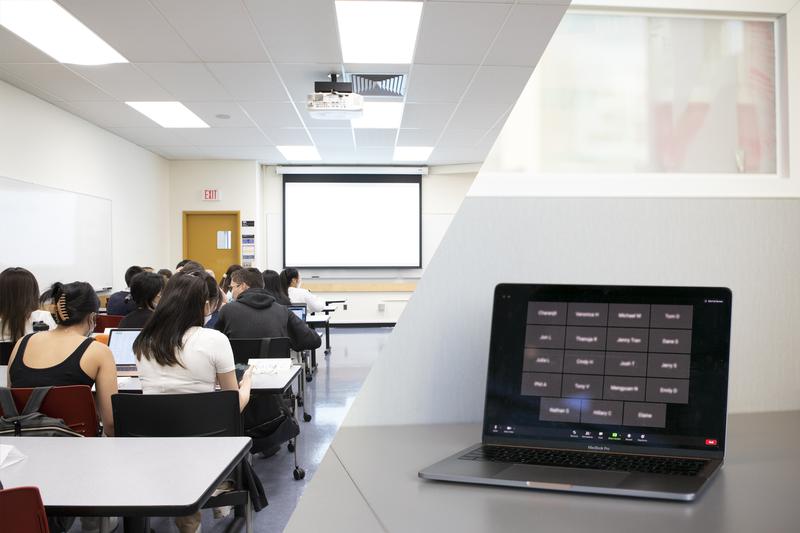 “I think hybrid is personally the best approach just because throughout the pandemic, we've learned that people learn in different ways,” said David. Isabella Falsetti

While many UBC students were eager to get back on campus this fall for in-person classes, some believe that a hybrid model would provide for a safer, more comfortable learning environment.

On September 10, the UBC Senate voted against a motion that would “[affirm] the need for flexibility for moving individual courses ... on or off line” until October 22. If passed, this motion would have allowed instructors — upon approval from deans or department heads — to move their classes either online or in-person until mid-October based on “pedagogical needs.”

In a lengthy debate leading up to a vote on the motion, opponents — largely deans and some faculty members — argued that students had made sacrifices to return to campus, and therefore would prefer to remain in person. Meanwhile, student senators said that they and their classmates would be happy with a hybrid model to relieve some of the anxiety around COVID-19.

Emmanuel Croll, a fourth-year political science student, agrees with the Senate’s final decision and said that while it is important to prioritize safety, teaching and learning is better done in-person.

“Our lectures were [not only] online last year, but 70 per cent of the campus was shut down. So we had no access to any infrastructure …. all you had was basically your laptop and also the coffee shop or your own house. That made it really difficult,” he told The Ubyssey.

Croll added that he finds it harder to focus and stay engaged with the instructor through a screen.

He isn’t entirely opposed to the idea of a hybrid model with live-streamed lectures, however. “I think that a hybrid model should potentially maybe be for the people who are unvaccinated ... who [have] COVID[-19] or people who have symptoms, or [are] just like not feeling well. It's always great to have the option of [staying] home.”

“My lectures are jam-packed full of people, people are coughing, there's no distancing happening, and I feel like it's just a difficult environment to like concentrate in,” she said on in-person classes.

Kolivand likes how a hybrid model allows her to rewatch and engage with lectures outside of the classroom. She added that live-streamed or recorded lectures provide a way for students who are stuck at home — due to circumstances beyond their control — to keep up with the class, even remotely.

“Having the option is really great or having something that’s hybrid, just for kids who can’t make it, or [are] feeling sick or anxious …. I also know that some people are still getting here ... so it would have been good for them to have the opportunity just to keep up.”

“I think hybrid is personally the best approach just because throughout the pandemic, we've learned that people learn in different ways,” said David. “People sometimes are more productive working from home than working from the office and I think the same extends to learning at school.”

David echoed Kolivand’s comments on the flexibility of online learning, but admitted that some classes — including her electrical engineering labs — need to be in-person.

She believes hybrid learning would offer a compromise of the two.

“In my opinion it's a model where the professor delivers the lecture, both in person and online … [students] come to campus if they want [to], explore [the campus], get the ‘university’ experience, but then they have control over how they learn.”