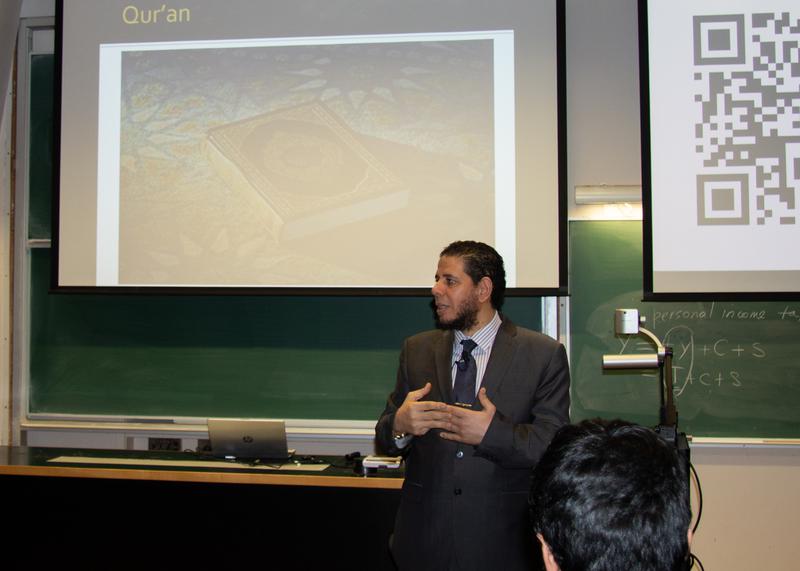 On the last day of the MSA’s United Islam Awareness Week, the club’s executives introduced the event titled, “Quran Burning Doubt,” in what was initially a sparse-looking lecture hall in the Chemistry Building.

They explained that their goal with the daily lectures during the week of January 20 to 24 was to foster a community that has a better understanding of Muslims and Islam in general. To the MSA, this is especially important due to the recent rise of Islamophobia.

Before his introduction, Dr. Reda Bedeir laid a prayer mat in the corner of CHEM B150. Bedeir holds a PhD in applied linguistics and Islamic studies from Al-Azhar University in Egypt.

“Have you ever heard of people burning the Quran?” he asked.

During his time teaching in the US, Bedeir encountered someone doing just that.

“I asked him, ‘Did you read the Qur’an?’ He replied ‘no’. He said he was told that the Quran teaches people to be fundamentalists, extremists, terrorists and is oppressive to women,” he said.

Bedeir explained the effects of ignorance about Islam and its consequences for Muslims worldwide, adding that “man is the enemy of the unknown.” The results of this ignorance are seen in China, where members of the Muslim Uyghur minority are put in concentration camps as reported by The National Post. They are also seen in India, as social unrest ensues with the development of a new citizenship law, which attempts to marginalize the country’s 200 million Muslims.

“They call us ‘radical,’” said Bedeir. “But we must find a way to live together in harmony and this can only be done through pursuing knowledge and radical change.”

Through recitation and translation of specific passages, Bedeir argued that these damaging beliefs about Islam were false. More than this, he showed that the Quran teaches Muslims to embrace diversity.

“Verse eight of chapter sixty tells us we should be especially righteous and fair towards those who disagree with us in faith,” he said.

By the time the lecture reached its halfway point, the once-empty hall was almost completely full, and Bedeir often elicited laughter from the audience with his enthusiasm. In this way, he was able to bring a diverse crowd closer together: those who belonged to Islam, another religion or no religion at all.

“Through actually reading and learning the Quran, those who burn it can come to realize how Islam is a religion that teaches peace,” said Bedeir. “Ultimately, the Qur’an is the only medium through which they can burn their doubts.”