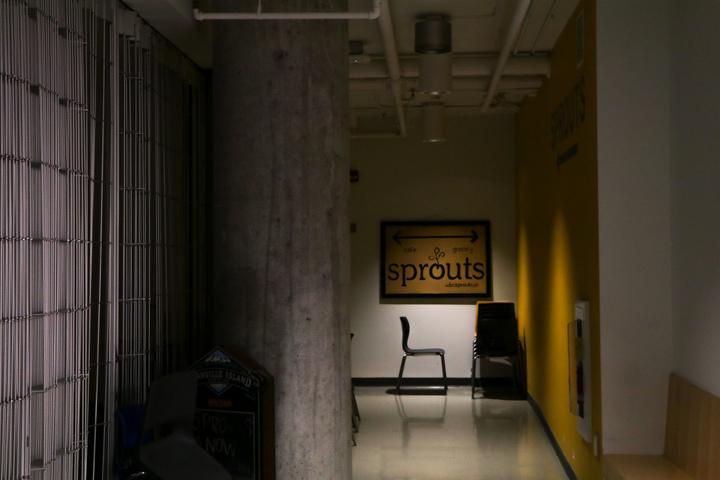 Sprouts has been using a part of the Pit for the past academic year. Kate Colenbrander

Due to ongoing renovations in the Old SUB, Sprouts, a volunteer-run cafe that serves sustainable food on campus, will be closed until the next academic year. While construction has been ongoing in the Old SUB for over a year, Sprouts has been using a part of the Pit during the day for the past academic year.

Nikki Lax, a fourth-year land and food systems student and vice-president of Sprouts, said that while they were able to use the space in the Pit, there were complications, including the space becoming 19+ in the middle of March due to changing hours at the Pit.

Lax said that Sprouts learned at the end of the last semester that not only were renovations delayed until December, but also that they were not going to get the Pit space again in the interim. While the fact that the renovations were delayed until the next academic year were announced at an AMS Council meeting on July 19, Sprouts did not receive a personal email updating them until August 19.

“We didn’t push for sharing the space because we knew it was not going to be a good environment for our volunteers if we had to be constantly ID’ing and watching our backs in that regard,” said Lax in a follow-up email. “It was initially only going to be for one semester so we settled — had we known at the time it was for an entire year, we would most likely have pursued it more.”

AMS president Alan Ehrenholz said in an emailed statement to The Ubyssey that the AMS is still brainstorming solutions and alternatives.

“We understand the value that Sprouts brings to UBC students, and are optimistic about their growth and outreach once their new space is available. We remain dedicated to assisting Sprouts in their outreach to students throughout this transition year,” Ehrenholz said in the statement.

Lax said that these alternatives, which included running as a pop-up shop, were unrealistic, so they decided to spend the year focusing on their other operations and getting ready to move into the new space in the Old SUB when it is finished.

“The bright side is that maybe we don’t have Sprouts this year but everything else is becoming stronger because of that,” said Lax.

Sprouts is still running their other cafe — Seedlings — out of the Thea Koerner Student House, and is also running their sprouts box, bulk buying program, workshops and helping out with the orchard garden. Lax also said that they are applying for the Aviva Community grant, which will be given to the project with the most votes.

Sprouts is also continuing their community eats program, which they are running out of the Engineering Student Centre from 11:30-2pm every Friday.