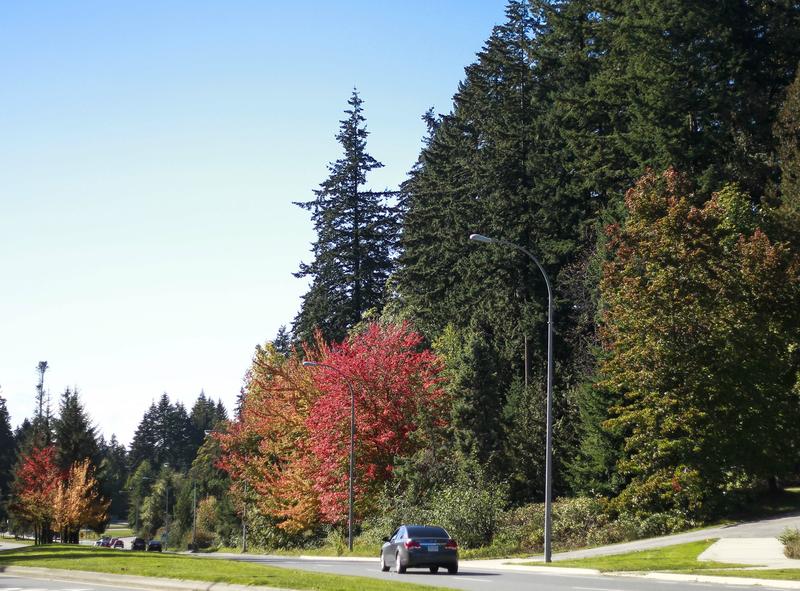 To free up space for residential planning, UBC would also build a new stadium near East Mall and West 16th Avenue. Elizabeth Wang

Update Friday, October 19 at 9:25 a.m: The consultation period has been extended to October 23.

As the third and final consultation for a large campus development project nears its end, UBC is attempting to balance a multitude of community interests and two broad options for how its newest neighbourhood will look.

The two options for the Stadium Road Neighbourhood development will move 900,000 square feet of the site towards market development of four to five high-rise towers, according to a Board of Governors submission. Another 600,000 square feet will become mid-rise buildings for faculty and staff housing as well as university or market rental.

UBC’s Associate VP of Community and Campus Planning Michael White said rentals for faculty, staff and students, as well as units for faculty ownership, would likely be rolled out first. The release of public rental and land-lease projects would then follow over a number of years.

To free up space for residential planning, UBC would also build a new stadium near East Mall and West 16th Avenue. According to Director of Planning and Design Gerry McGeough, the current stadium would continue to be used during the construction of the new one, which is estimated to take around three years.

Beside residential planning, the options both allot approximately 120,000 square feet for non-residential areas that would go toward community development.

Some differences between the two plans include the exact location of the new stadium and its potential impact on nearby trees, the locations of the housing units and non-residential areas, and the configuration of traffic flow. Option 1 also has two variations for the location and height of the high-rise buildings.

As the consultation period nears its end, White noted the university has to balance a number of interests.

“We weren’t surprised to hear from the students, faculty and AMS that they want more rental and ownership opportunities in the neighbourhood,” he said.

“That balances off with other interests in the community… [from] existing residents concerned for the livability of the neighbourhood, the impact of taller buildings or more people, and what that means for transportation and open space.”

In a Board submission, the AMS urged an increase in allotted residential area from 1.5 to 1.8 million square feet and an increase in tower height from 22 to 36 stories. The society also wants to restrict public market rental to university-affiliated housing.

AMS VP Academic and University Affairs Max Holmes argued that this proposal would offer not only a greater financial incentive, but also decrease the development’s ecological footprint.

“With more of the units that you could sell in there, you could make more money that would go into the endowment which benefits the academic mission of the university,” he said. “Also, you decrease the footprint, increase the amount of park-space, make sure there’s more natural ecology in that system.” 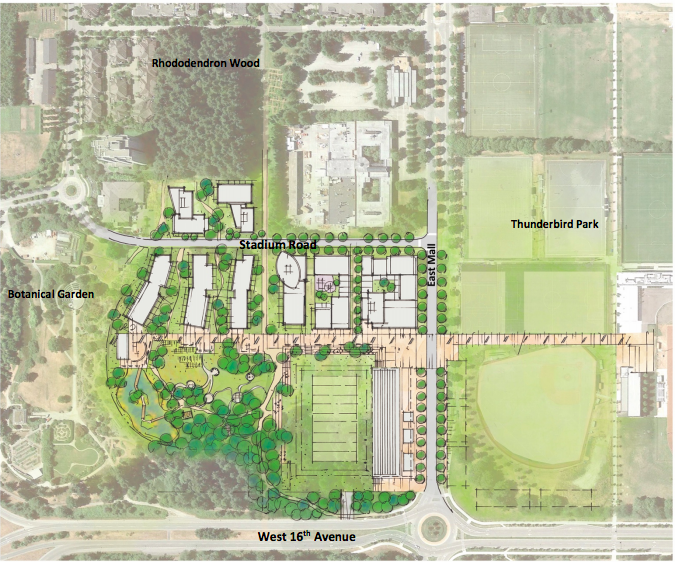 Option 1A Screenshot via UBC

Dr. Charles Menzies, a faculty representative on the Board and a resident on campus, noted that just increasing density might not be enough to improve affordability — but that there should also be different types of housing model.

“[Some of my colleagues in economics, sociology and commerce] point out that increasing density does not equal affordability unless you actually change the structure the of access and ownership protocols,” he said.

“You have to introduce non-market mechanisms to drive the price down … the real solution is stuff like building cooperative housing models.”

The AMS also criticized a number of outside arguments against the proposed increase in tower height, attributing some to have “come from a point of privilege.”

Some critiques included that taller towers would “poor symbolism” because of the different heights between public units and those for staff and faculty, high rise buildings being “eyesores” and creating too much density.

“The first two arguments come from a point of privilege that students, 14 percent of whom report experiencing housing insecurity while at UBC, have little sympathy for,” reads the submission in response, adding that the last concern could be solved through “proper planning.”

Menzies said he has “never ever heard” the first two concerns.

“Unlike the student authors of that report, I actually live in this area,” he said. “I meet with a lot of faculty, students and non-university affiliated residents, and I’ve never ever heard that statement — not saying somebody somewhere never said that.”

Instead the concern “has been more about the overuse of space and limited public domain,” according to him. 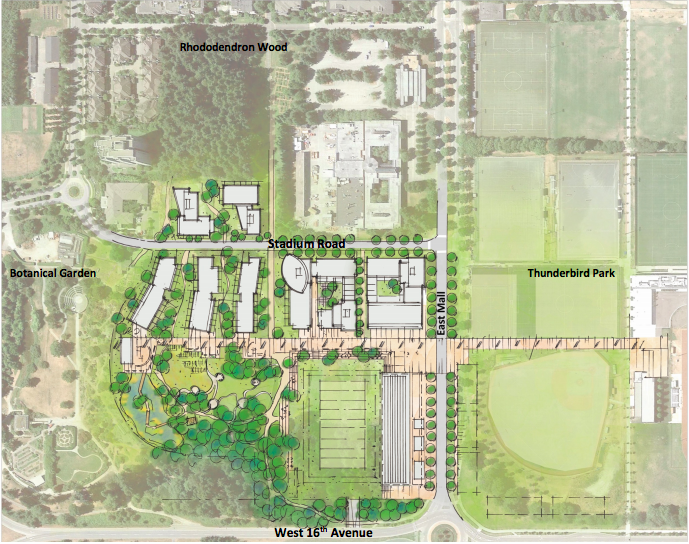 Option 1B Screenshot via UBC

For White and McGeough, the need to plan for services and amenities to accommodate an increased population is in the planning process. They particularly stressed the importance of transportation planning, especially as the university lobbies for an expansion of rapid transit from Arbutus to campus.

Despite a lack of firm commitment to the project from TransLink and governments, UBC is already considering potential sites for subway stations, including one on the south end of campus.

“It’s also about the surface network and making sure we make and route a better bus service, cycling facilities, pedestrian access, pick-up and drop-off locations for people attending events,” said White. “All of these things are being looked at very comprehensively in tandem with the Neighbourhood Plan.”

“We want to enhance East Mall as really pedestrian, bike, transit-friendly, and slowing it down so that it reduces the impact of noise and safety at risk for those living in both the future Stadium Road Neighbourhood and also in Hawthorne areas,” McGeough added.

With the final round of consultation winding down, Menzies said that he is “disappointed” in the quick pace of the consultations — but acknowledged the work of the planning group.

“ … I think [the planners] very sincerely are trying to do the best job they possibly can within the terms of reference they have been provided — I think these people are all earnest believers in livable cities and eco-density,” he said.

“But my criticism is, I think the terms of reference are too narrow that focus it in and has it tied too much to endowment production, which is ongoing problem at the university, I think.” 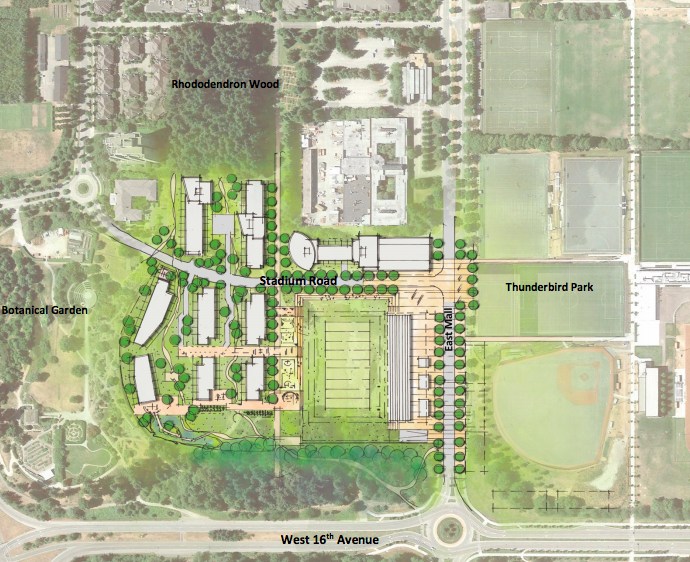 White, however, believed that there has been “extensive consultation over the past year.”

After this round of consultation, UBC will recommend a plan — potentially a hybrid of the two options — to the Board in December, according to McGeough.

But this process would still leave room for further adjustment.

In an October 18 letter, Board Chair Michael Korenberg acknowledged concerns about high-rise buildings’ height, the potential impacts of population increase on community services and the consultation’s pace.

“We want to take the time to further explore these three key areas and respond to community concerns,” he wrote, adding that this process would also continue following the plan’s adoption.

In particular, further discussions would take place within the Board’s recently re-established Housing Action Plan Working Group and with the Vancouver School Board, the provincial government and community stakeholders like the Musqueam Indian Band.

The feedback could then be incorporated into the final plan that UBC presents to the Board in February 2019.

If this proposal is supported by the Board, there would be a public consultation on changes to the Land Use Plan, and it would be used to form a recommendation to the provincial government on the topic. The Stadium Road Neighbourhood plan would then be “set in motion” if the Land Use Plan amendments are approved by the province.

Community members can provide feedback to the Stadium Road Neighbourhood planning consultation via an online survey until October 21. More details about the option is outlined in the first Board submission.

This article has been updated to include the letter from Board Chair Michael Korenberg.