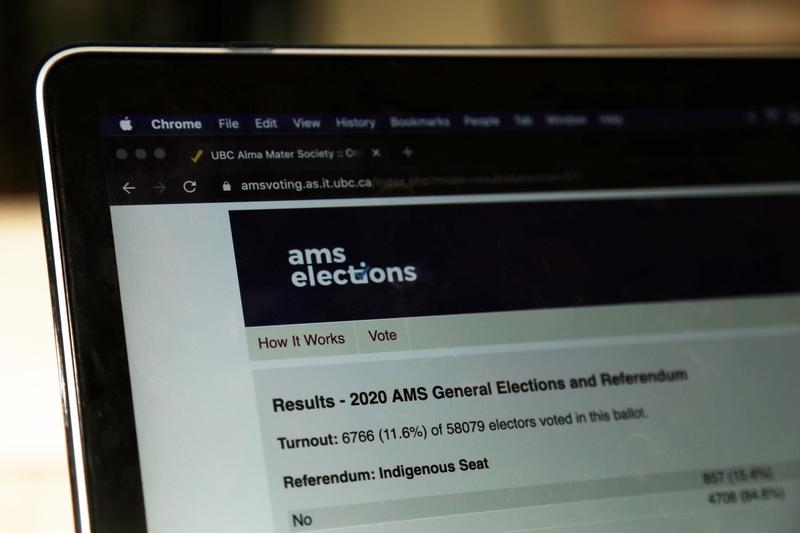 The AMS will still help promote these elections, but it will need to negotiate a contract with UBC to re-assume oversight in the future. Jasmine Foong

Elections for faculty-specific student senators will be run by the UBC Registrar’s Office instead of the AMS this year, a change opposed by the Student Senate Caucus.

In an email sent to students on February 5, UBC announced that students interested in running for faculty-specific senator positions should send their nomination paperwork to their office. Previously, these elections were conducted by AMS constituencies like the Arts Undergraduate Society or Science Undergraduate Society, for their respective Senate representatives.

The change comes after the AMS learned that constituencies had accidentally been breaking provincial law in how they were running their elections.

“UBC was like, ‘That's not ideal’ … We tried to go through training and all sorts of things, but this has been a recurring issue,” said Ava-Pointon.

The AMS will still help promote these elections, but it will need to negotiate a contract with UBC to re-assume oversight in the future.

Ava-Pointon hopes to have this contract completed by next year.

“We're working on a lot of things. So this is not a permanent solution to everything, this is us best using our resources at a very strange time.”

In a written statement emailed to The Ubyssey, Academic Governance Officer Jessica Iverson wrote that the Registrar’s Office had been informed by the AMS about the changes, but expressed support for the contract negotiations.

“We hope mechanisms and structures can be put in place to assist students in re-assuming this responsibility for future elections and would be pleased to work with the AMS towards that goal,” she wrote.

Student Senator-at-Large Max Holmes does not believe the absence of a contract justifies the AMS’ decision.

“In almost every single AMS Council meeting there's some suspension of code. And this is a very easy requirement that could have been suspended,” he said.

The senator had previously expressed his opposition to the new election rules in a series of tweets posted the same day as UBC’s email.

Thread: It is now official, elections for more than 2/3s of student senators will no longer be run by @ams_elections. This is despite the opposition of our student @ubcsenate caucus. This decision seems to have been made by the AMS not UBC, still this is extremely disheartening. pic.twitter.com/3jk57SfDDl

He called the AMS’s decision “extremely disheartening” and wrote that this will have a disproportionate impact on the ability of smaller faculties to raise awareness around nomination and voting periods.

In an interview with The Ubyssey, the senator cited conversations with student senators from these smaller faculties to back his position

“We heard the same message which was, ‘If you separate our elections from constituency elections, you will lower turnout, and make it a lot more difficult for people to participate in these elections,’” he said.

At the February 11 AMS Council meeting, Holmes introduced motions to direct the governance committee to rewrite code in order to ensure that the AMS continues to run student elections in the future, and to ensure consultation if decisions like this are made in the future. The motions passed unanimously.

Holmes acknowledged that the current situation is not ideal, but said that student senators are committed to ensuring students are aware of the upcoming elections.

“We're gonna try our best to communicate this and get this out there on our social media.”

This article has been updated to clarify that the issue in the AMS running elections was an incorrect electorate, not the fact that the elections were being run by the student government.