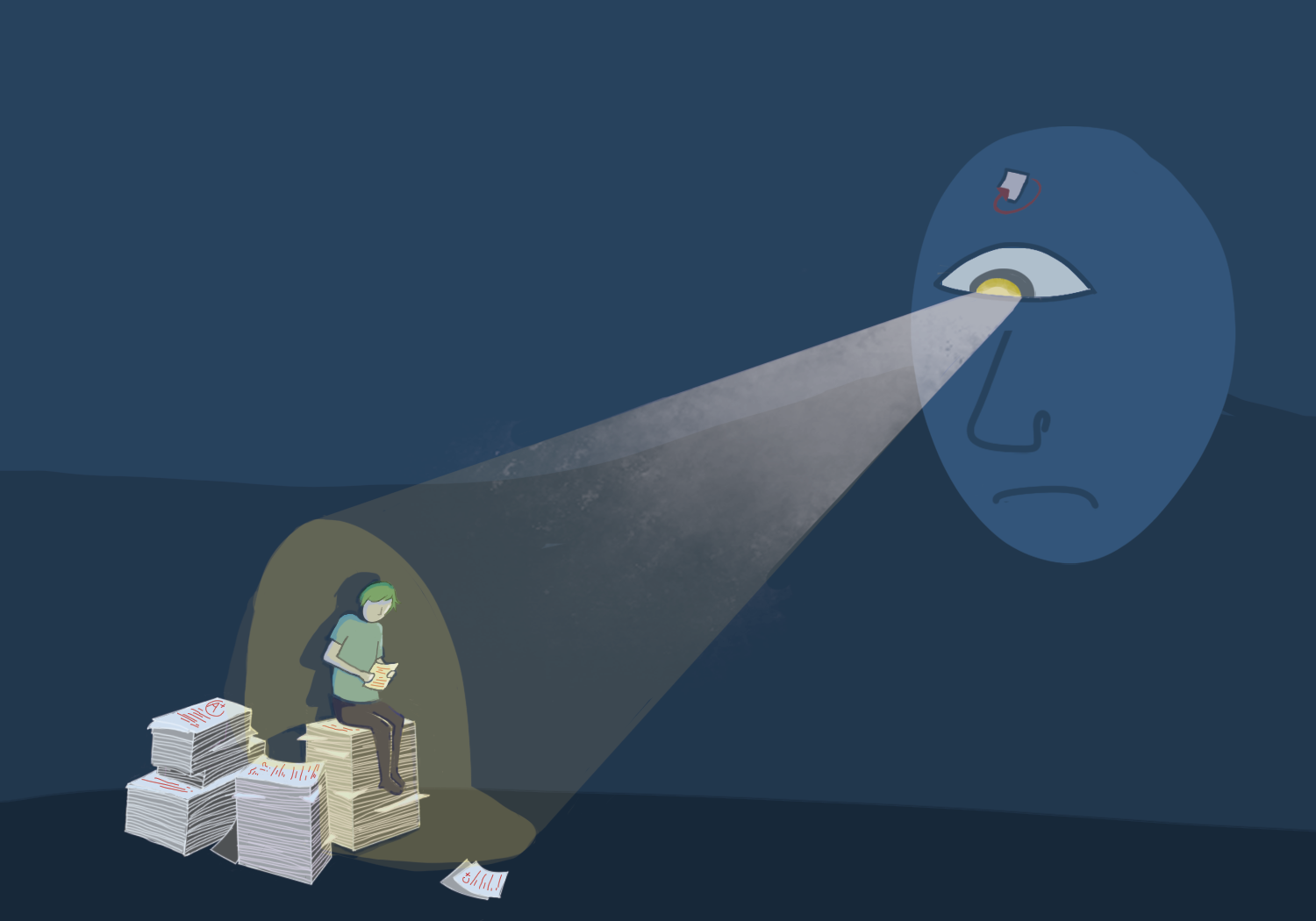 Turnitin doesn’t say what it exactly does with student submissions or how long it keeps them in its database. Kristine Ho

The plagiarism detection software Turnitin is used widely across campus, but concerns over students' privacy and trust have raised the question of whether it should be used at all.

Using Turnitin in BC is a little different than in most places due to the province’s stringent privacy laws. But concerns for students’ privacy and trust raise the question of whether it should be used at all.

Second-year psychology student Sophie Garcia has taken several courses where professors have required her to use Turnitin, the popular plagiarism detection software used at educational institutions like UBC.

Before submitting, she was told to remove all identifying information from her work without being given a reason.

“I think [my professors] said to put a fake name,” she said. “They told [us] to take out all personal information, but … I don't remember any of the profs telling me why.”

Turnitin is a website that compares submissions to its proprietary databases of websites, journals, books and previously uploaded student work. Its algorithm then spits out a similarity score. A higher percentage indicates overlap between the student’s submission and Turnitin’s database, a possible marker of plagiarized work.

Many instructors use and support Turnitin because it enforces academic integrity, but some are concerned that it compromises students’ privacy by storing personal information and intellectual property.

Others believe subjecting students to plagiarism tests creates a culture of distrust.

“If you were just like, ‘I don't want to submit,’ [professors] are going to be like, ‘Well, you must be plagiarizing,’” said Garcia.

So why can’t uploaded assignments in BC contain identifying information? The answer lies in provincial privacy law.

Section 30.1 of the BC Freedom of Information and Protection of Privacy Act (FIPPA) mandates that an organization “must ensure that personal information in its custody or under its control is stored only in Canada and accessed only in Canada.”

In other words, personal information in BC can’t leave the country.

Turnitin is an American company with databases located in the United States and Europe, so it is not obligated to follow Canadian privacy laws. For instance, the US government could request access to student Turnitin submissions under the USA PATRIOT Act, or any other law that wouldn’t normally apply to BC residents.

This means that UBC instructors who want to use the service must comply with section 30.1 by not only removing identifying information inside submissions but also cleaning metadata attached to documents that could be linked to the student.

According to Mike Larsen, president of the BC Freedom of Information and Privacy Association (FIPA), a privacy advocacy group, BC and Nova Scotia are the only Canadian provinces that have laws that restrict cross-border data flow like section 30.1.

“It’s a progressive piece of legislation,” he said. “It really does ensure that organizations are held to a higher standard when it comes to the protection of personal information.”

Through a Freedom of Information request, The Ubyssey obtained a transcript of UBC legal counsel Paul Hancock’s 2015 presentation to the Legislature. He said that “no section of the FIPPA has caused greater challenges for the post-secondary sector in BC than section 30.1.”

Hancock’s problem with the law? “It erodes our competitiveness,” he said.

Instructors must allow students to use fake names with services like Turnitin, creating extra work for the instructor who must figure out who the account belongs to. It detracts from UBC’s international image when instructors and students wonder why they must jump through an extra hoop, he explained.

Hancock added that the section in fact hampers data security. Popular services like Canvas, Google Classroom and Turnitin are based outside of Canada, but when institutions can’t use these, they must find domestic alternatives that might be not as well developed.

“Locally hosted systems are less reliable, and ironically, they are less secure than cloud-based ones,” he said in the presentation.

“We’ve caused untold frustration for our faculty members and bemusement for many of our students who wonder why we can’t use the system as it’s intended.”

The submission recommended that out-of-country data storage be permitted in circumstances where “there should be no reasonable alternative in Canada.”

But according to Larsen, relaxing section 30.1 for the benefit of corporate institutions is worrisome. It would not only weaken the protection given to British Columbians’ personal information, but also feed into broader concerns of surveillance.

“[It] makes it … difficult for people to turn around and ask serious questions about things like suspicionless searches, … searches at borders and the surveillance of data flows by telecoms or social media companies,” Larsen said.

Yet many instructors and students are unaware of the restrictions on cross-border data flow and publish personal information to Turnitin anyway, making it difficult to enforce.

Recent BA graduate in anthropology Aridda Koh used Turnitin in a Korean history class, but she says her professor never informed her of privacy policy.

“They never said that. I just turned it in … name and everything and all,” she said.

Turnitin doesn’t say what it exactly does with student submissions or how long it keeps them in its database, but its privacy policy states that “Turnitin may transfer personal data to companies that help us provide our service.”

“It’s very cryptic. You have no idea what’s going on on the other side and what they’re doing,” she said.

In a statement to The Ubyssey, spokesperson Amanda Zeligs Hand wrote that Turnitin stores student work “by default only for the purposes of textual comparison." But unless instructors request it specially, Turnitin “generally … does not delete papers automatically.”

They added that the third parties mentioned in its privacy policy include learning management systems like Blackboard, the system that preceded Canvas at UBC. They stressed that they only share personal information to allow “flexibility” in how Turnitin provides its service.

“Third parties, except for the institution for which the paper has been assigned and uploaded, do not have access to uploaded papers,” reads the statement.

“Watch everything. By collecting the haystack, then you can identify the needle.” Kristine Ho

“Nothing to hide, nothing to fear”

Larsen, who is also the co-chair of the criminology department at Kwantlen Polytechnic University, also warned that Turnitin creates a “pedagogy … of categorical suspicion” that suggests instructors don’t trust their students.

“We’re interested in academic integrity. We’re interested in the pursuit of trust,” he said, “and the way we’ve gone about trying to achieve this, through software like Turnitin, is to simply say that nothing and no one is trustworthy.

“It really is a ‘nothing to hide, nothing to fear’ mentality baked into what should be an institution of critical thinking.”

Garcia echoed that it’s unclear what instructors consider an acceptable or unacceptable score.

“When my profs or TAs go through my Turnitin turn-it-ins … you have no idea what they're thinking,” said Garcia.

Conventionally, Larsen says, only people who have done something to warrant suspicion are subject to surveillance. Having every student submit their work to Turnitin regardless of who they are sends a message that their work will not be trusted as authentic.

“ … That’s a foundational relationship between you and the institution that will continue on,” he said. “Watch everything. By collecting the haystack, then you can identify the needle.”

Koh says her high school teachers strongly emphasized the consequences of plagiarism from a young age.

“That was all they told me. If you plagiarize, you’re gone, you’re dead,” she said.

Not a “plagiarism score”

But other educators like Dr. Catherine Rawn, a senior instructor in UBC’s department of psychology, say Turnitin does more help than harm.

“Think about [i]Clicker points,” she said. “You could say there can be very good, pedagogically-sound reasons for incorporating Clickers, [but] they could be used as punitive attendance buttons.”

Garcia has taken Rawn’s classes and says she understands why professors use Turnitin, but she sometimes worries about accidental plagiarism.

Despite not having plagiarized, a student might receive a non-zero Turnitin score. The issue with a numerical score is that it is unclear how instructors interpret it.

Rawn understands that similarities between a student’s work and the Turnitin database are often harmless because the metric is simply representative of overlap, perhaps due to the use of quotations or students referring to the same article.

“I don’t know anybody who looks at that number and says, ‘That’s a plagiarism score,’” she said.

More often than not, Rawn has found that a high Turnitin similarity score means the student has improperly quoted or paraphrased. She tries to treat such situations as learning opportunities.

“The vast majority of conversations that come out of my Turnitin … is about how to write better,” said Rawn.

“The way I usually approach it is, ‘Here’s what I’m seeing. Tell me what’s going on here.’ And, I don’t walk into that conversation saying, ‘You have plagiarized. You’re gonna fail.’”

Turnitin's statement affirmed that the service is meant to provide “teaching moments.”

"Turnitin's plagiarism checking services do not make a determination about plagiarism ... Ultimately, human judgment is required," they wrote.

"Ideally, these teaching moments are happening in classrooms regardless of if a plagiarism checker is used, but are made easier thanks to solutions like those from Turnitin."

Regarding privacy, Rawn says she is “happy” to offer students the workaround of creating Turnitin accounts with a pseudonym, but she has never seen any pushback from students.

“If a student did come to me with serious concerns about their privacy and their data being used in this way, I would be open to a conversation to figure out a different solution … but nobody ever has in my 7,000 students,” she said.

But according to BC law, students’ personal information should not be stored on Turnitin’s servers regardless.

When asked about section 30.1, Rawn said she vaguely remembered being told this when she first started using Turnitin nearly a decade ago.

“It’s a policy that I have in my syllabi that I’ve cut and pasted year over year,” she said.

According to a statement from Dr. Simon Bates, UBC’s associate provost of teaching and learning, “Instructors whose students are required to use Turnitin as part of their course activities are also clearly informed of student options when they sign up for the service.”

Since the RUCBC submission, there has been little discussion about concerns with Turnitin, but a special legislative committee will review the policy in 2021 as is required every six years.

Despite all these concerns, it is unlikely that UBC and other institutions’ stance on section 30.1 will change. Since 2015, educational technology has been “expanding massively” in high schools as well as post-secondary institutions, says Larsen.

“I guarantee you that we're going to see lots of pressure [from institutions], probably not just in the research universities,” he said.

Amidst the debate, Garcia says that students are too often forgotten.

“It’s funny that [professors] don’t know much about it because they’re not even the ones submitting,” she said. “It’s their students who mandatorily have to submit. They don’t give the students a choice.”

After three emails over the course of a week, Turnitin did not provide a statement by press time.

This article was updated to correct a misspelling of Dr. Catherine Rawn's last name.

This is article was updated on May 30 to include a written statement from Turnitin.