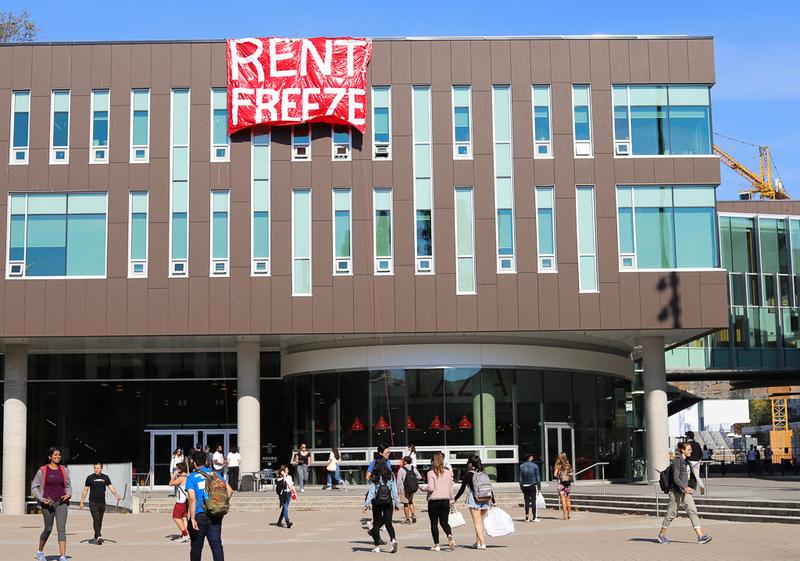 A small group of UBC students hung a large banner from the roof of the Nest this afternoon calling for a rent freeze in the Vancouver area. Alex Nguyen

Update Tuesday, September 4 at 6:25 p.m: The group has voluntarily taken down the banner.

A small group of UBC students hung a large banner, which called for a rent freeze in the Vancouver area, from the roof of the Nest this afternoon.

A large red banner reading “RENT FREEZE” was hung from the top floor of the Nest at approximately 3:45 p.m. on Imagine Day, an orientation day for incoming UBC students. A small black banner reading “MANSION TAX NOW” was laid on the steps outside the building.

The affiliated students wore t-shirts promoting the Coalition of Progressive Electors (COPE) — a longstanding progressive municipal party — and Jean Swanson, a homelessness activist who is seeking a seat on Vancouver City Council as part of COPE. 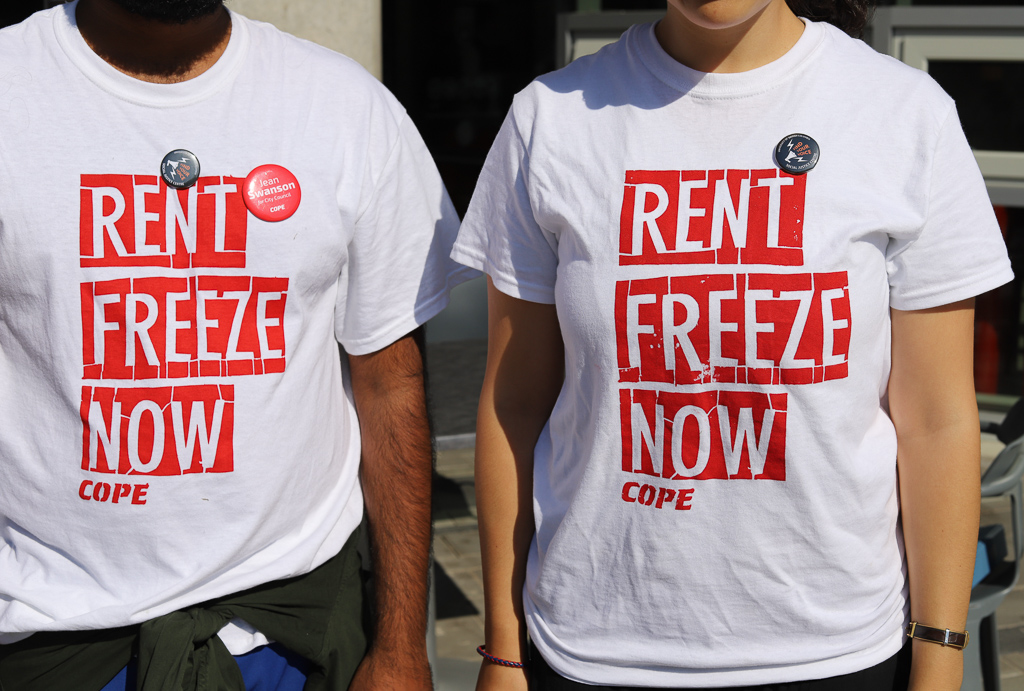 Gabby Doebeli, UBC Social Justice Centre (SJC) co-chair and one of the organizers, said the SJC's campaign aims to bring students’ attention to the upcoming municipal elections, which have generally seen low voter turnout from youth.

“The SJC really wants to bring democratization to campus, and part of that means bringing the upcoming municipal elections to campus, which is happening on October 20,” she said.

Chief among these issues is the lack of affordable housing, which has been a longstanding issue for both Vancouver residents and UBC students. Doebeli pointed out that although there is a provincial cap on rent increase at around four per cent per year, the city is still “really unaffordable to a lot of communities.”

“‘Rent freeze’ is the COPE’s campaign — their rallying point basically is a four-year rent freeze, so we just jumped on their campaign,” she said.

“.... A lot of students are renters and this campaign is all about bringing power to renters.” 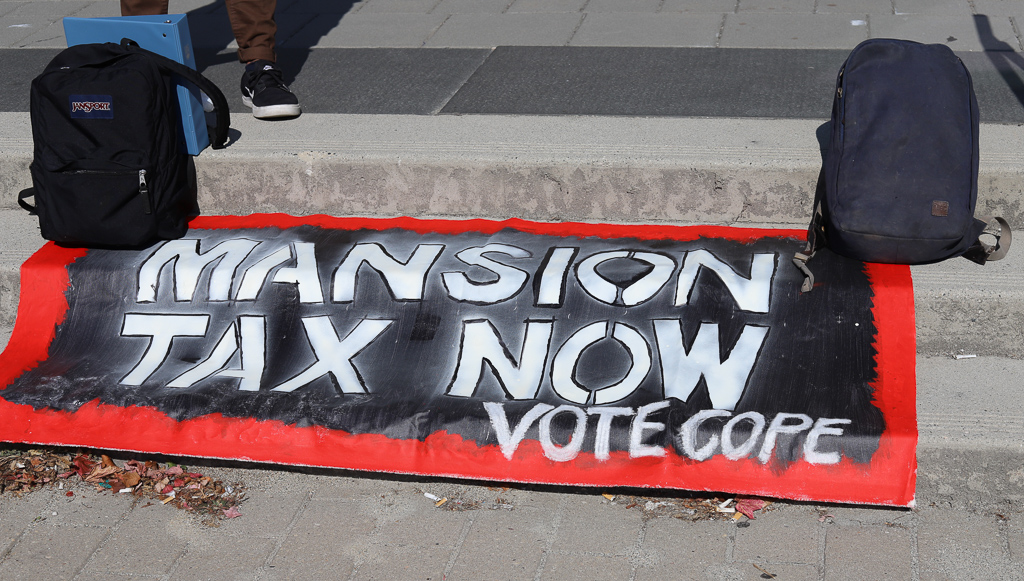 At UBC, annual rent increases for student housing are now limited to the consumer price index plus two per cent, following AMS advocacy and the Housing Action Plan’s five-year review by the Board of Governors in April.

While Doebeli said the students had borrowed the banner from COPE, a spokesperson from the coalition said they were not aware of the action taking place until contacted by The Ubyssey — but supported its sentiment.

“It’s not a COPE action, and it seems to have been taken on autonomously by someone,” said Campaign Manager Shawn Vulliez.

“We support a rent freeze … we definitely appreciate support on that,” said Vulliez. “Generally speaking, activism is a cool thing.”

In an interview with The Ubyssey, Swanson encouraged the activists to continue “applying pressure” to the municipal and provincial government.

“It’s actions like this that help put the pressure on the city and the province to help get the city we need where rents aren’t through the roof and tenants and students can afford to live,” said Swanson. 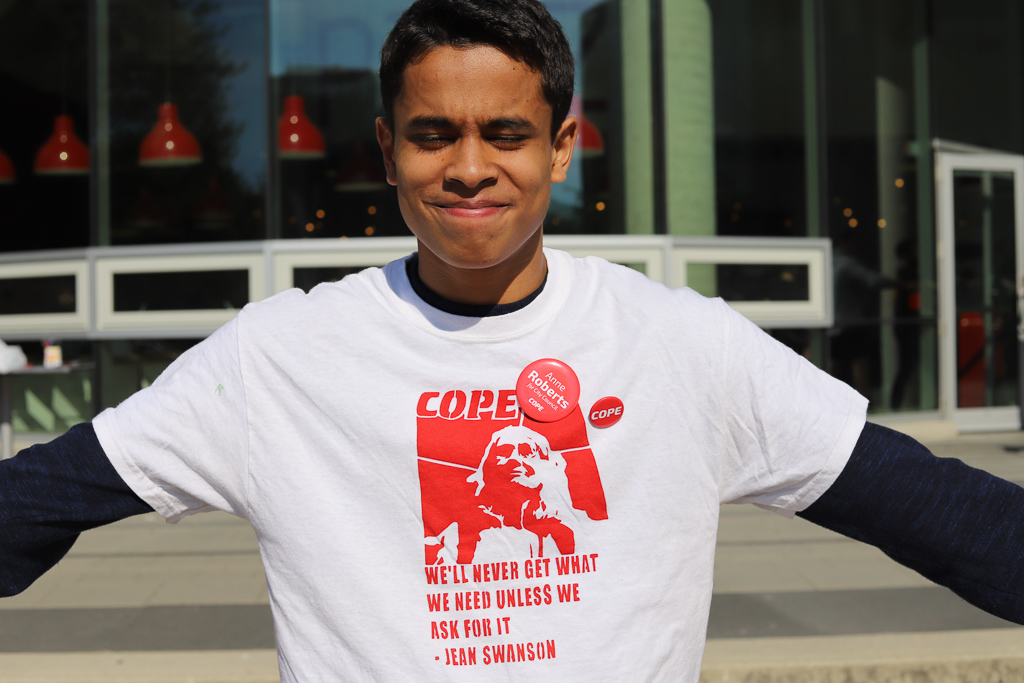 Beyond today’s campaign, Doebeli said the group will continue canvassing for COPE and other progressive candidates, and encourages students to vote in the lead up to the elections.

“We’re really hoping that students will be more aware of the municipal election and get involved in whatever way that they choose to do — whether that be just voting or getting involved with COPE campaign or get out the vote campaigns,” she said.

AMS President Marium Hamid said the society supports the right of students to demonstrate, but clarified that the AMS was not affiliated with the freeze.

“We’re happy to see our campus mobilize for something important to them,” said Hamid.

This article has been updated to clarify that the campaign is affiliated with UBC's SJC.