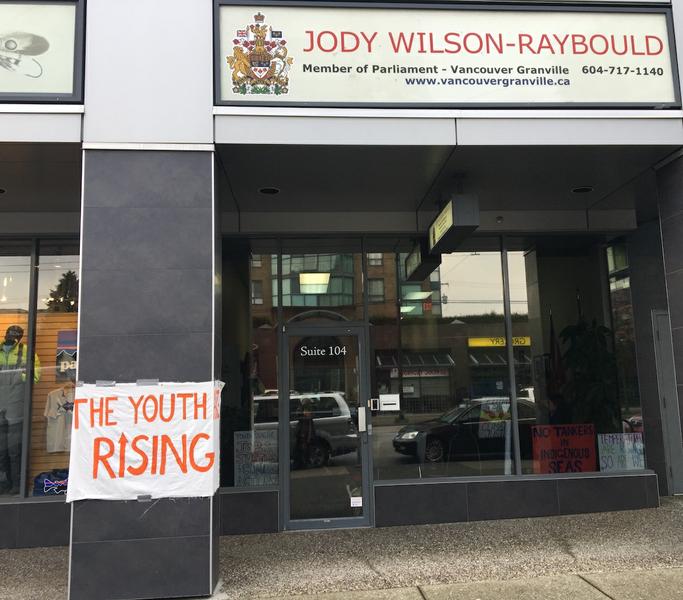 Students are occupying the local office of Minister of Justice the Honourable Jody Wilson-Raybould, whose seat is Vancouver-Granville. Alex Nguyen

Two dozen youth are occupying a local minister’s office, urging the federal government to step up its response to climate change.

Students from the UBC Social Justice Centre and sustainability group UBCC350 are occupying the local office of Minister of Justice the Honourable Jody Wilson-Raybould, whose seat is Vancouver-Granville.

Beginning around 10 a.m. today, the sit-in is a part of the launch of Youth Rising, a youth collective holding demonstrations across Canada in anticipation of the COP24 climate summit that will begin on December 3 in Poland.

“Youth Rising is a collective of young people ... that leans toward the common goal of ensuring what is promised to us [about climate justice] by the government is upheld,” said national spokesperson Avery Shannon. 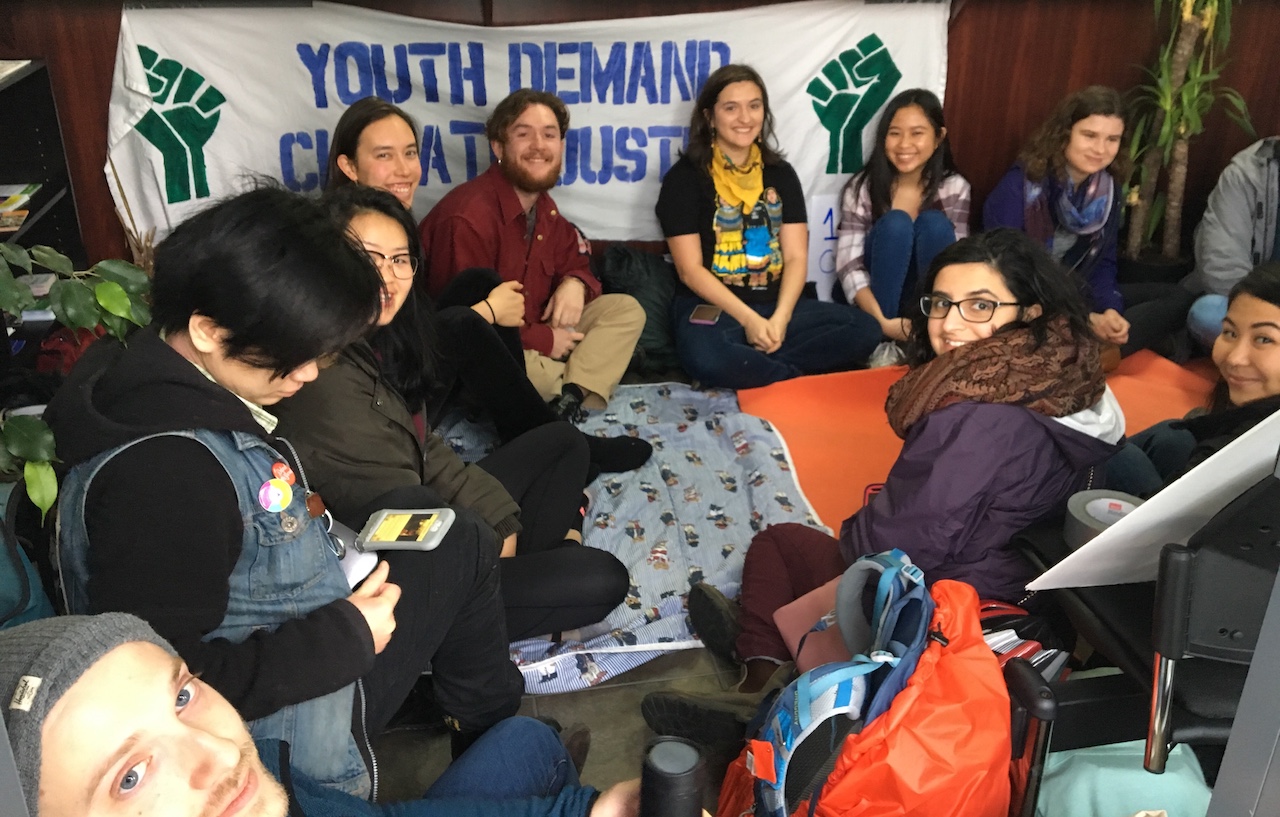 Students from the UBC Social Justice Centre and sustainability group UBCC350 are occupying the local office of Minister of Justice the Honourable Jody Wilson-Raybould. Alex Nguyen

Organizers are demanding that MPs bring their concerns on climate action to the House of Commons by December 14, saying the federal government should keep promises made during the 2015 election.

“We were able to vote for the Liberal government because the environmental promises they made really resonated with us,” said demonstrator and local spokesperson Alyssa Yu. “We’re mad that they’re not upholding those promises and we want to hold them accountable to that.”

Among the demands Yu listed are an eventual 100 per cent transition to renewable energy, a moratorium on future fossil fuel extraction and the creation of a million “climate jobs” by 2030 via federal investment in transportation, infrastructure and renewable energy.

She cited the recent UN’s Intergovernmental Panel on Climate Change report, which found that immediate action is needed to maintain the benchmark of a maximum 1.5 degrees increase in global temperature. 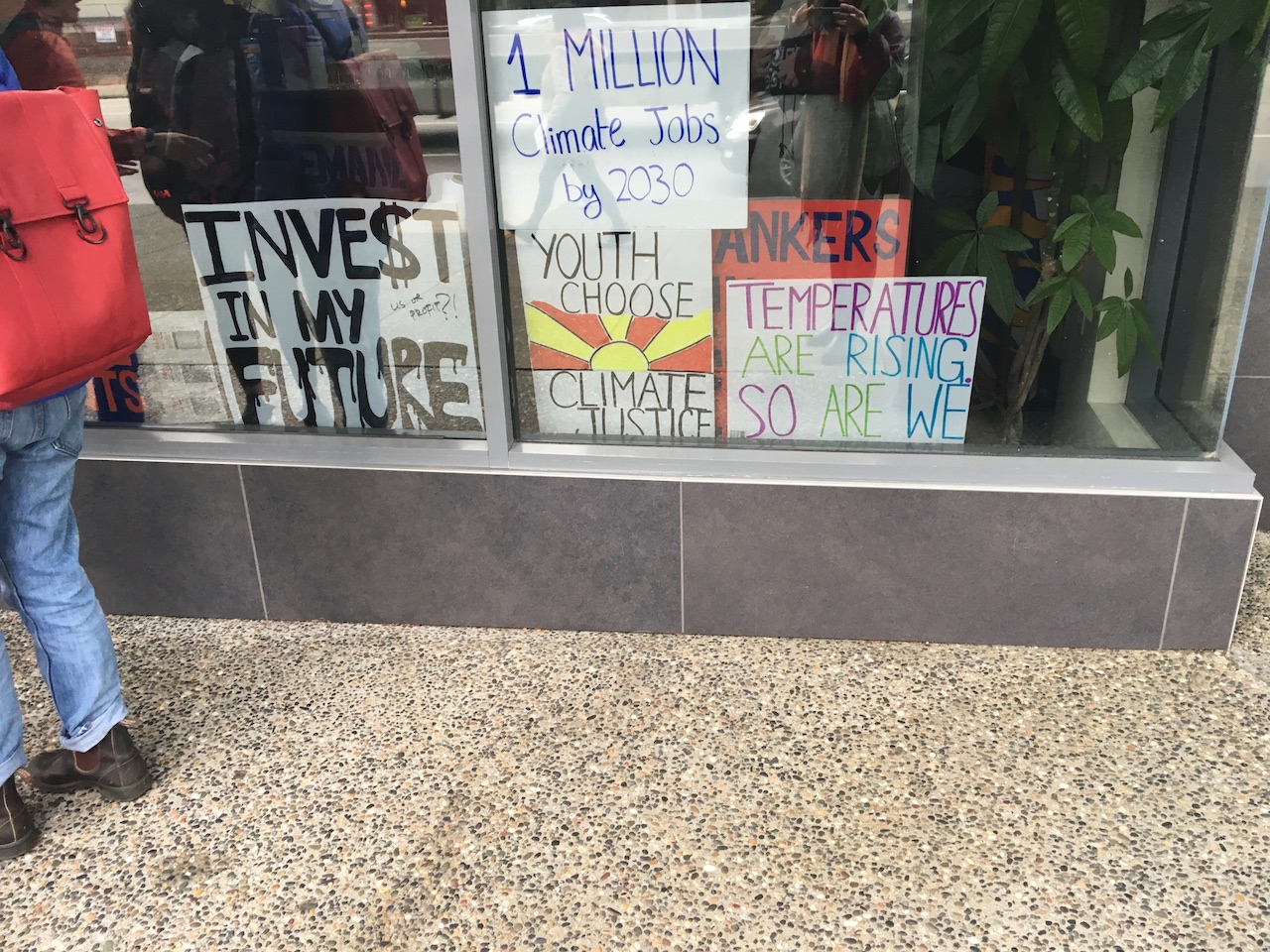 Organizers are demanding that MPs bring their concerns on climate action to the House of Commons by December 14. Alex Nguyen

They’re also asking for the full implementation of the UN Declaration on the Rights of Indigenous Peoples, particularly the need for prior consent before beginning extractive projects on Indigenous territory.

David Taylor, director of communications for Wilson-Raybould, acknowledged the Vancouver sit-in but did not address the group’s demands.

“The Minister is aware of the situation,” Taylor wrote to The Ubyssey. “She respects the people’s right to lawful and peaceful protest.”

Although Yu is hopeful about the group’s demands making it to the House of Commons, she and Shannon stressed the need for ongoing action.

“The demands that we have today are to be met by 2030,” Shannon said. “There are a lot of years in between now and then, but it also feels like it’s not enough so there are a lot of actions that needs to happen with that.”

“Our generation will have to bear the burden of climate change because of the decisions the government is making for us,” added Yu.

“We’re going to keep doing this until something changes. We can’t just sit here and do nothing anymore. And if it doesn’t work, the world is doomed to climate change.”