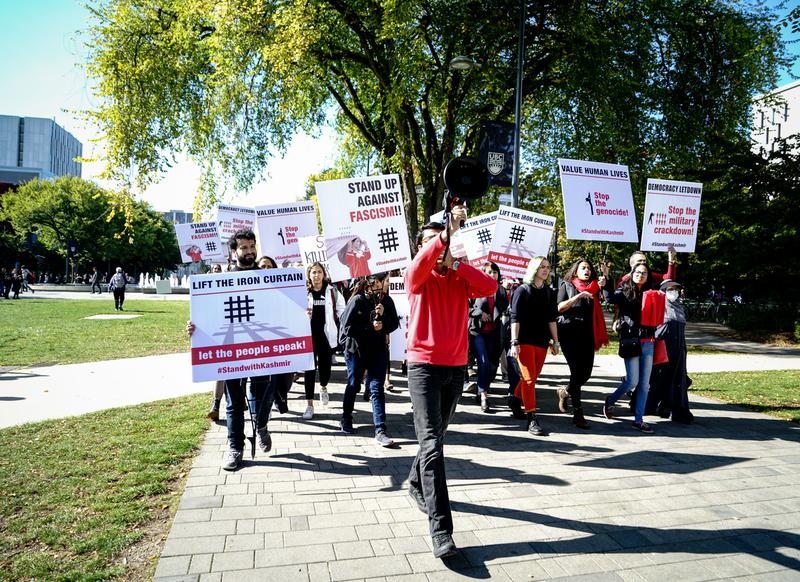 “This is not just a blatant violation of human rights. It is also a violation of all the civil liberties that we hold so dear to ourselves living here in Vancouver.” Elizabeth Wang

On October 1, a group of around one hundred people marched from the Martha Piper Fountain to the Nest in protest against the militarization and communications blackout in Kashmir.

Echoing across University Boulevard were chants of “Free, free, free Kashmir!” “Hear our voices! Tell our stories!” and “Hum Kya Chahte! Azadi!” which translates to “What do we want? We want freedom!”

In between marching, organizers and Kashmiri students spoke to the crowd about human rights violations in Kashmir and the importance of speaking out against them.

Member of the humanitarian collective Stand with Kashmir UBC, Taabish Masood, began the event by talking about the communications blockade and its effects on people both within and outside the Kashmir region.

“People that are away from Kashmir, students of our very university, can no longer talk to their parents because of the communications blackout that has been put in place.”

“This is not just a blatant violation of human rights. It is also a violation of all the civil liberties that we hold so dear to ourselves living here in Vancouver,” he said.

The Kashmir conflict began after the partition of India in 1947 when disputes over the region of Jammu and Kashmir led to a series of wars primarily between Pakistan and India — although China has also been involved.

On August 5, the Indian government scrapped Article 370, a decades-old provision that gave Kashmir a special autonomous status. Kashmiris responded by taking to the streets to protest. Since then, thousands of people in the region have been arrested and detained and all communication lines have been cut.

In front of the Nest, Kashmiri-born student Tabinda Mumtaz Sultan Shah acknowledged her privilege of having grown up in Malaysia instead of the conflict-rife Kashmir but added that hers is “not the story of a wealthy family that upped and left a desolate situation.

“My father was kidnapped and tortured by pro-government militia. My mother had to hide her wedding jewelry every time our house was raided by Indian army,” she paused to compose herself before continuing to address the crowd.

“It is the story of my people that I’m here for today. The story of my uncle who is being detained under the charge of being a businessman … and you know what? We’re the lucky ones because we know where he is,” said Mumtaz Sultan Shah. 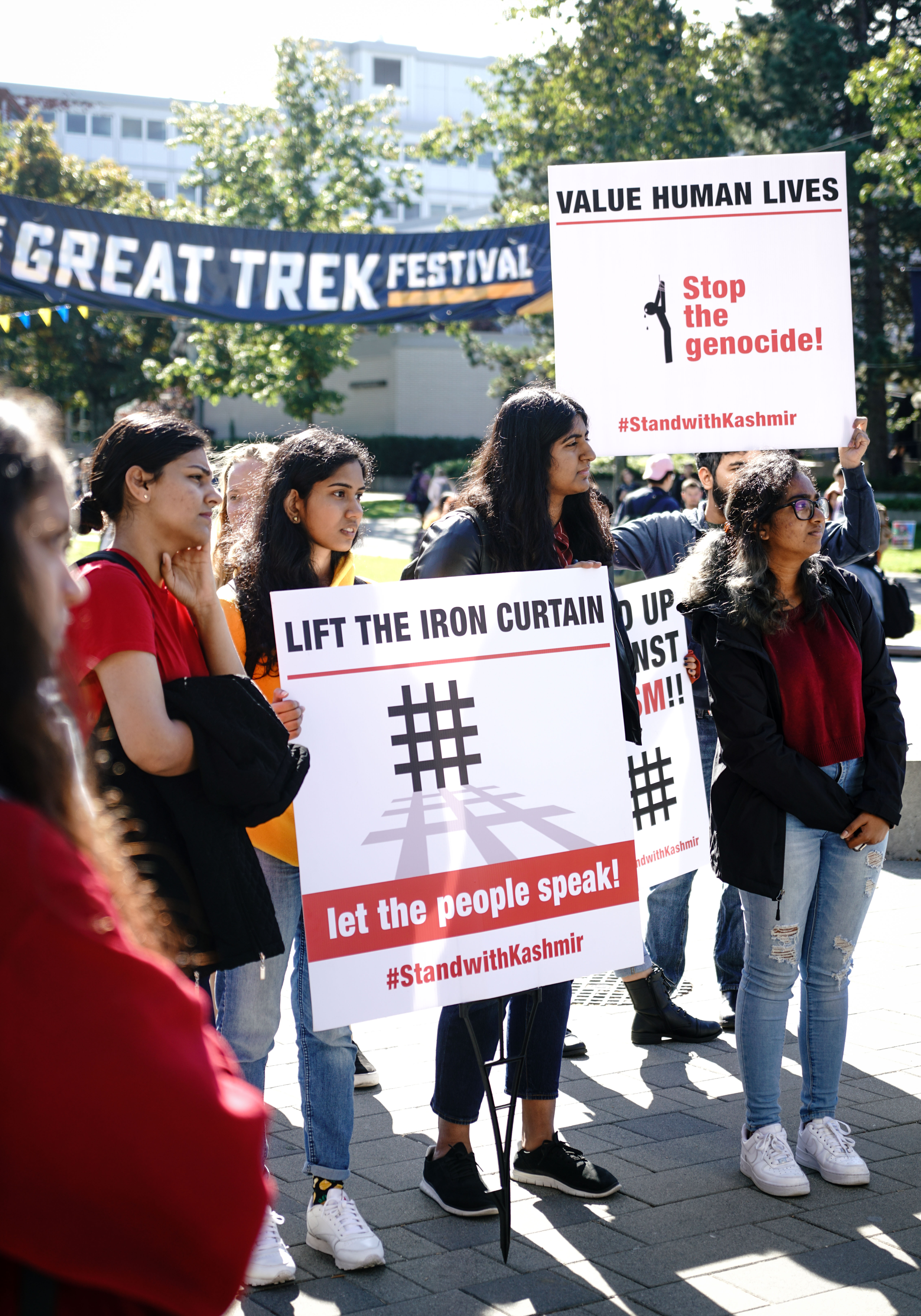 “If today, we remove politics … you will see how the conflict in Kashmir – and, in fact, every conflict and war – is a pure humanitarian crisis.” Elizabeth Wang

One of the Stand With Kashmir members, Alifya Sohail, spoke on behalf of a Kashmiri student who could not attend the rally because of the numerous death threats her family has received.

“My motherland of Kashmir is a paradise on Earth. Its mountains are filled with beauty only the lucky few have gotten to see,” said Sohail on behalf of the absentee Kashmiri. “But, if its mountains are also filled with vast, unnamed graves that the Indian authorities do not want you to know about, how unlucky are we?”

The speech Sohail read encouraged listeners to put their humanity before their nationality.

“Your stand here is not a question of being pro-Indian or pro-Pakistani or Chinese or being a nationalist or a leftist. If today, we remove politics … you will see how the conflict in Kashmir – and, in fact, every conflict and war – is a pure humanitarian crisis.”

“I know for a fact that many of you study politics, [international relations], science, engineering. I want you to use my words to remind you that before you are anything before you believe in anything, you are human,” Sohail read.

The speeches concluded with words by Stand With Kashmir member Riya Talitha, who encouraged fellow Indian nationals to stand up for the people of Kashmir.

“There are 900,000 troops stationed in Kashmir — not to cut down on terrorists, not to make sure that there’s law and order — but to clamp down on civilians who are protesting unarmed.”

“If we don’t speak up now, there will be even more lives lost — there are lives being lost right now as of this moment 2,000 kilometres away,” said Talitha.

As the rally wound down, Masood told the crowd about the UBC Global Lounge panel talk, “Voices From Kashmir,” featuring Kasmiri experts, as well as a similar protest in Holland Park in Surrey on October 5.

Speaking with The Ubyssey, he added that Canadians can also write to their local MLAs and MPs about their concerns with the situation in Kashmir.

“One of the things Canadians can do is put pressure on the government to stand by Canada’s existing stance on the Kashmir issue, which is that they do not support militarization of the region which the authorities right now are doing.”

Masood was referring to Canada as a signatory of the UN Security Council Resolution 47, which includes the recommendation to reduce Indian forces in Kashmir to a minimum required level for peace.

“Some local MLAs and MPs spoke out against this but none of them have been as vocal as, let’s say, Bernie Sanders in the United States, who is very vocal about this issue.”