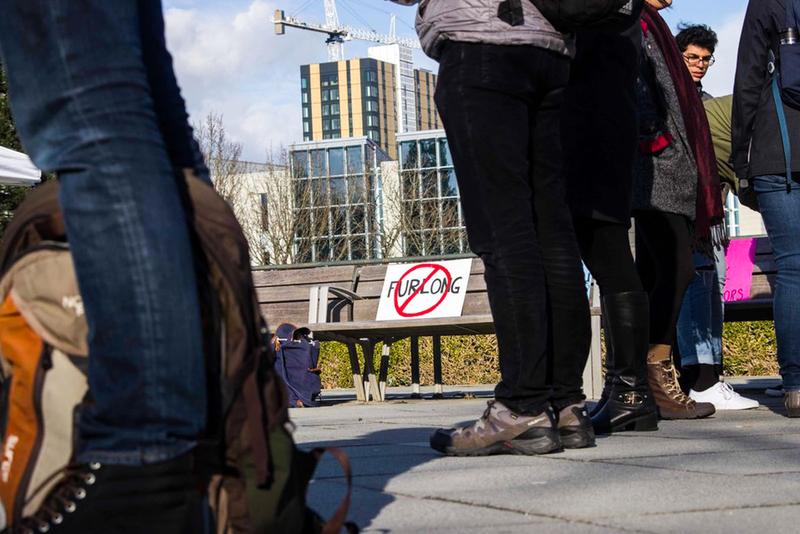 Furlong, who oversaw the 2010 Winter Olympics in Vancouver, was removed as the fundraising event’s speaker in December. This was after a letter sent addressed to UBC brought up allegations that he abused First Nations children during his time as a teacher at a residential school.

UBC President Santa Ono later apologized to Furlong and invited him to speak at the event again, writing in a statement that the decision to cancel his speaking engagement was “incorrect.”

Some of the allegations against Furlong were investigated by the RCMP and dismissed, while others were not formally brought to court.

At the demonstration, the testimonies of Ronnie West and Richard Perry were read out, which explained that West and Perry were former pupils of Furlong’s who respectively witnessed and experienced verbal and physical abuse from him. West and Perry both signed affidavits with their testimonies for a Georgia Straight reporter in 2012.

“We were talking in our native language and [we got taken to] a private room, and we got hit by a leather strap, ruler,” said Perry, a hereditary chief of the Babine First Nation, to those gathered at the protest. “Some of my friends [committed] suicide.”

Hereditary chief Myrtle Perry, Richard Perry’s sister, also spoke about their past in the residential school.

“When the Georgia Straight had put an article out about John Furlong and the abuse, they pretty well-discredited my brother,” she said in an interview. “From the experience that I went through with Immacualata [Residential School], I know that these things happen.”

Charles Menzies, an anthropology professor at UBC and member of the Gitxaala Nation, attended the demonstration and criticised the university’s actions in handling Furlong’s speaking engagement.

“This has been a whole series of goofs and errors and missteps that perhaps a more experienced administration that was more responsive and capable of understanding the issues would have dealt with in a far more expeditious manner,” he said.

“If the University of British Columbia wants to take efforts of reconciliation seriously, then they really need to listen to the voices of the people like the Perry family who spoke here and their experiences in the government-run schools where teachers like John Furlong taught at.”

Myrtle Perry said that her message to the UBC community would be to learn more about First Nations.

“What I’m suggesting is just make a little bit of time to just try to understand the First Nations because we are a people and we are a lovely people, and we need a lot of understanding and support,” she said.

The demonstration was organized by a group of UBC students. They did not wish to be named or quoted, instead emphasizing that the only voices represented at the event should be those of Indigenous people.