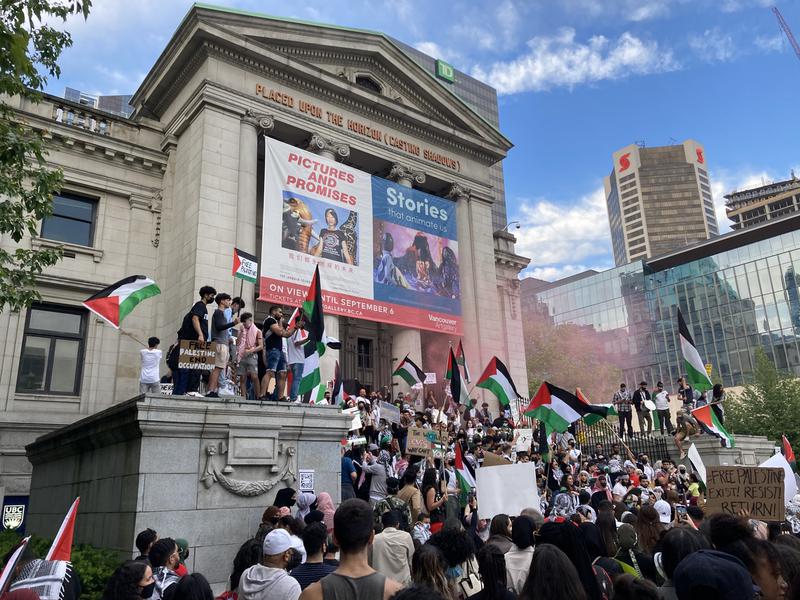 Students have participated in pro-Palestine protests in Vancouver, including this one in front of the Vancouver Art Gallery. Z. Aazadeh Raja

Amid Israel-Palestine violence in Gaza, some UBC students and clubs have responded by participating in protests and awareness campaigns.

Over an 11-day period, Israeli forces and Hamas, a militant Islamic group who controls the Gaza Strip, fired rockets following an attempt by the Israeli government to evict six Palestinian households from their homes in Sheikh Jarrah, a neighbourhood of East Jerusalem. The rocket fire disproportionately damaged infrastructure and injured thousands of Palestinians and killed over 240 in Gaza.

The two sides agreed to a cease-fire that has been in effect since Friday, May 14.

Rallies organized by pro-Palestine groups took place in Vancouver and across Canada in response to the violence in the region. Some pro-Israel groups also gathered.

Yousif Elbeltagy, a fourth-year honours political science and international relations student, attended a few of these pro-Palestine protests over the past two weeks.

“The protest tone was very nice. There were a lot of different people from all over … We all [had] a single unified message in trying to raise awareness,” he said.

Elbeltagy believes that UBC should take a stronger stance in regards to this violence, the way that it has for past international issues.

UBC has not released a public statement on the humanitarian crisis in Gaza, but Senior Communications Director Kurt Heinrich from UBC Media Relations sent a short statement to The Ubyssey calling the situation “incredibly complex.”

“The university deplores all violence and is hopeful diplomatic efforts can bring an end to the suffering experienced in Gaza and in Israel,” Heinrich wrote.

Many student clubs have been more vocal than the university in raising awareness around the recent violence.

During the height of the violence, the UBC chapter of Solidarity for Palestinian Human Rights (SPHR) hosted a panel that emphasized the need for allyship between North American and Palestinian Indigenous communities. The panel featured Indigenous guests who expressed solidarity with those in Palestine.

In a follow-up interview, Dalia, a fourth-year cognitive sciences student and representative from SPHR, said that it was important for students to have conversations about what is happening in Israel and Palestine. Her last name has been omitted to protect her privacy.

“Many students don’t know what’s going on and so it’s important for us to educate each other. It’s time to break the stigma and to have these tough conversations so we as a student body can contribute to change,” she said.

Dalia said that students should speak up about Palestinian human rights.

“The fight for justice is far from over and we need to motivate people to use their voice and their platforms to amplify Palestinian voices,” she said.

She recommended that students continue to educate themselves and boycott companies supporting the Israeli government’s occupation of the West Bank.

Another UBC club, the Social Justice Centre (SJC) is currently trying to raise awareness regarding the Palestine-Israeli violence and amplify the voices of Palestinians on the ground such as Mohammed El-Kurd, an award winning writer and poet currently in Sheikh Jarrah.

“There's a lot of misinformation out there that serves to obscure the power dynamics at play. And so what we're trying to do is really to make these power dynamics apparent,” said a representative of the SJC. Their full name has also been omitted for privacy reasons.

Part of this effort is an email campaign to empower students to pressure their local MPs to take a stand against the Israeli government’s violence towards Palestinians.

They also said that clubs and organizations at UBC should show solidarity by reaching out to the SPHR and collaborate with it in order to raise awareness, as well as educate their members on the issue.

“I believe in people power at the end of the day, and I think that all of us have a role to play when it comes to this,” the SJC representative said.