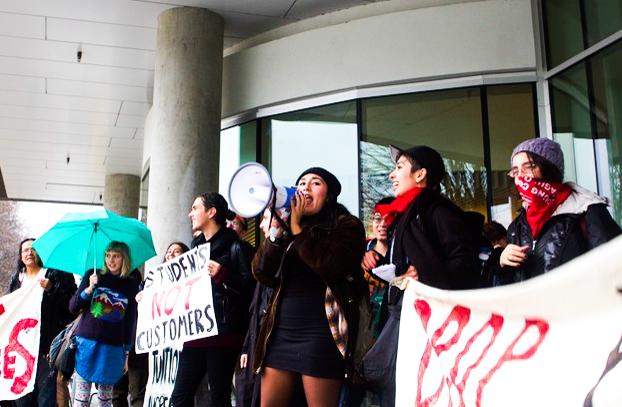 Dozens of UBC students and community members gathered yesterday at the flagpole near the Rose Garden to mobilize against increasing costs of post-secondary education in Canada and the “price tag” put on attending UBC.

Organized by the UBC Social Justice Centre in partnership with the Canadian Federation of Students and the Young Communist League, the rally was one of 40 events that took place across Canada yesterday to coincide with the National Student Day of Action.

“It’s not just about raising consciousness, but getting people to realize that it’s a real privilege for a lot of people to get education,” said Tania Talebzadeh, a fourth-year arts student and chair of the Social Justice Centre. “We are not all alike and we come from different life situations, but that should not block us from getting education.”

The chanting protesters moved via Main Mall from the flagpole to the Nest, where a series of passionate speeches were delivered from rally organizers and representatives of various UBC and community organizations, including the UBC Women’s Centre and the Left Alternative.

Students in attendance were concerned with the Board of Governors’ 2015 decision to increase tuition fees for both domestic and international students by two per cent and 48.5 per cent respectively. Speakers also aimed to stress the impact of such decisions on marginalized students at UBC, including those who are Indigenous.

“[UBC] talks about the ‘best of the best’ being here and there’s a lot of First Nations students who should be here, but ... it’s all about the funding,” said Rodney Little Mustache, a First Nations second-year arts student, before addressing protesters at the rally. “Every student who has the dream to do better for themselves and their community should be here, because they’re the ‘best of the best’ as well.”

Students in attendance alike saw the rally as an opportunity to engage themselves in a relevant dialogue on campus.

“I’m just feeling tired of being used by UBC for our money and not really knowing where it’s going,” said Nisha Takhar, a third-year student in the faculty of land and food systems, and an attendee of the rally. “I think it’s really important for me as a student to take the initiative … to know what’s going on in the university.”

As the rally’s organizers plan their next steps, they are focused on making students’ voices heard in decision-making at UBC despite “not seeing any partnership” with UBC administration present at today’s event.

“[The UBC administration] lets you protest ... but they don’t actually do anything about it,” said Talebzadeh. “It’s just not paying attention and like a pseudo form of caring.”

UBC’s VP Students Louise Cowin did, however, note that UBC not having a formal channel for incorporating feedback from student protests is far from it not caring about students’ discontent.

“UBC certainly encourages respectful student protest on campus,” said Cowin in an interview with The Ubyssey. “Were we to have been notified of the protest, we would have happily sent a representative to listen directly to what students were saying.”

Despite the lower-than-expected turnout and lack of administrative presence, organizers were “heartened” by the enthusiasm shown by speakers and participants alike.

“It’s about getting together, the mentality of having someone to have your back and being stronger as a student body,” said Talebzadeh. “From here, we’re looking to keep disturbing, keep agitating and continuing to encourage students to mobilize for their rights.”