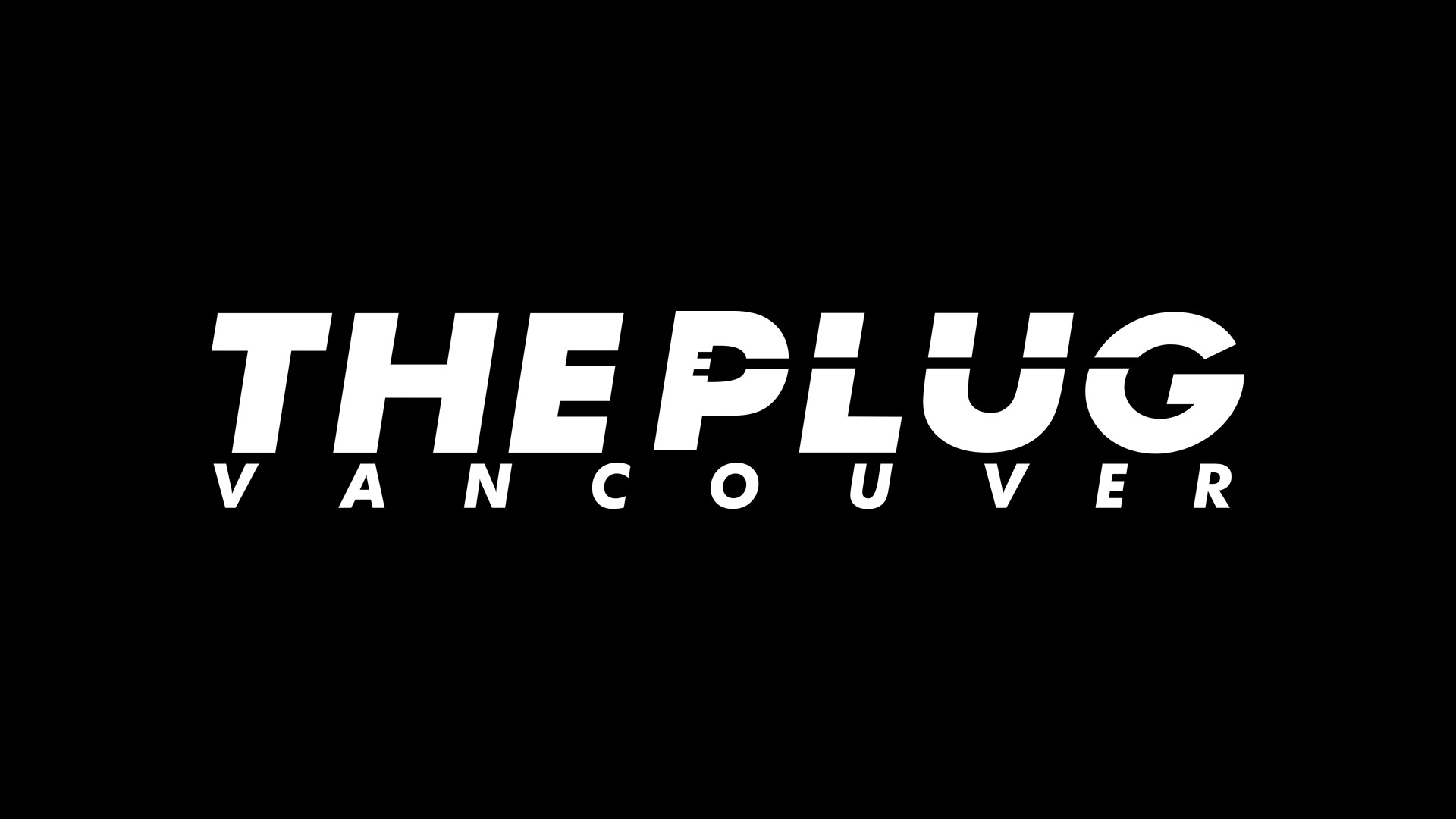 Amid misogyny accusations, ThePlug Vancouver deletes video about sorority women due to ‘harassment’

ThePlug Vancouver has come under fire for a video about UBC Sororities that many sorority members are calling misogynistic.

Published on Friday, June 11, the video, “Sorority Girls Share Their Juiciest Greek Life Secrets | Unplugged,” has since been removed from both Instagram and YouTube, with ThePlug citing “multiple instances of harassment, bullying and certain false accusations being directed towards the participants, crew and production team” as the reasons for taking it down.

Women flooded the comments of the Instagram post of the video last week — many of them criticizing the video and ThePlug for posting it.

ThePlug has been involved in a few other controversies over the last year, from former AMS VP External and ThePlug founder Kalith Nanayakkara’s conflict of interest investigation — he was found to have no real conflict of interest, but violated the society’s code — to its endorsements of candidates in the last AMS election.

In the video, four women in UBC sororities were asked questions such as “Would you hook up with someone that has already been with a sorority sister?”, “Would you rather be a frat brother?” and “Do you want to say anything to your big?”

UBC Sororities President Eleni Bascombe wrote in a statement that it was “disappointing” to see how ThePlug represented the sorority experience.

“UBC Sororities is an organization of empowered women who are passionate, intelligent, creative, hard-working, and ambitious,” Bascombe wrote.

“The video is misogynistic in that it focuses on outdated and lazy stereotypes of sorority women, and ignores all their accomplishments both in a sorority and in the UBC and greater community. The comments on the video show our sorority women as strong and articulate and not willing to be misrepresented in this way.”

Melissa Banuta and Llana Arreza, a second year and a fifth year in UBC Sororities, agreed that the video was not representative of the reality of sorority women at UBC.

“I would say that it just belittled … all of the work that every chapter has done — especially in the last two years — to break that standard, stereotypical sorority girl that is depicted in the media nowadays,” Arreza said of the video.

Third year and sorority member Haniya Syed criticized the “promiscuous” questions asked to the women in the video and said she wished it had focused more on the accomplishments of women in UBC Sororities.

“People like to paint UBC Sororities with the biases and the stereotypes that they hold, without actually understanding what we're built on.”

Banuta said as some of the members of ThePlug were in Greek life, she was confused as to how sororities were depicted.

“I just expected to see a video that kind of broke out of the stereotypes of sorority women, and tried to showcase what we are truly about,” she said.

Syed added that UBC Sororities has been taking steps to better itself.

“As a woman of colour myself in a sorority that was established to exclude me, I'm making a difference by being here, and inviting the other women of colour … and people of the LGBTQ community … to be a part of this community,” Syed said. “By posting things like this, it's so backwards, and it's so harmful.”

Before the video was taken down, Arreza worried that it might have an impact on formal recruitment in the fall. “These potential new members will see this video and will get a completely wrong idea of what UBC Sororities' values and morals are.”

ThePlug sent a three-page statement to The Ubyssey, outlining the making of the video and why it was taken down.

On the content of the video, ThePlug emphasized that participation was voluntary and participants were able to skip questions. 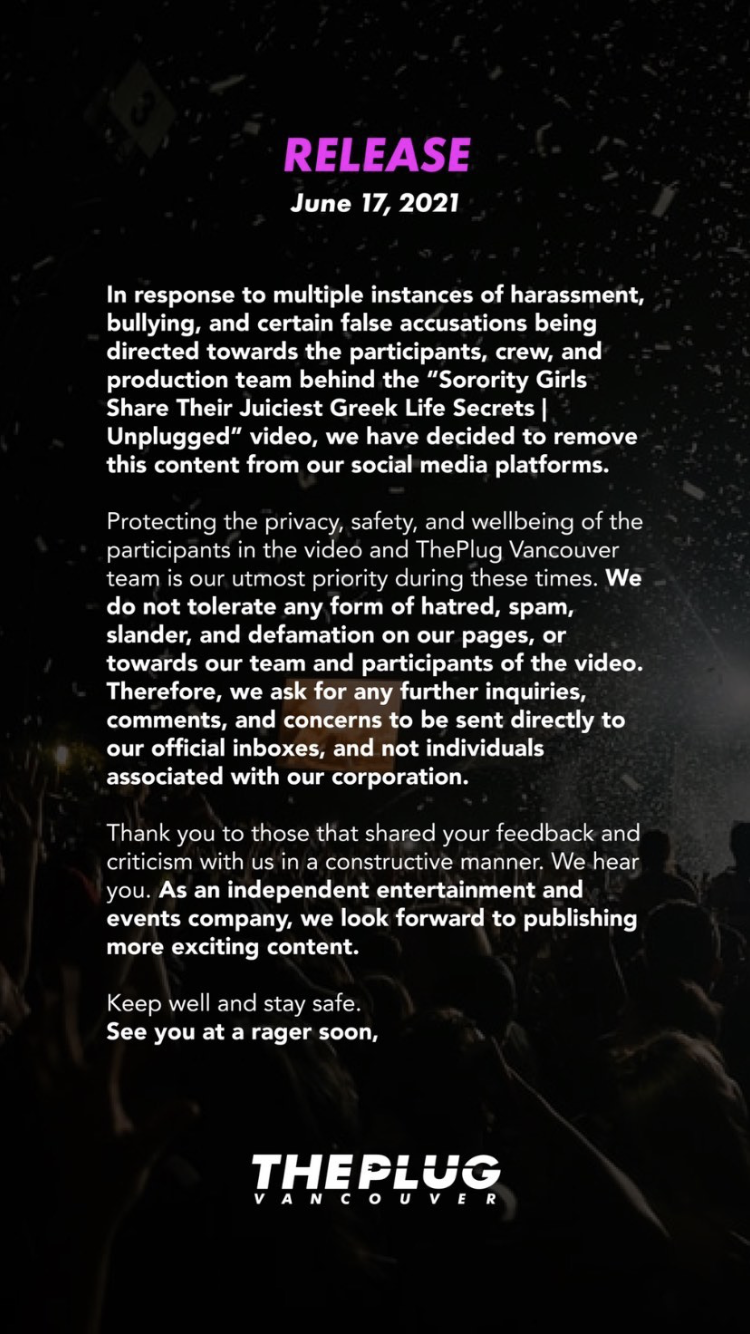 ThePlug Vancouver's initial statement on the video. Screenshot from Instagram.

“The questions asked in the video were not intended to perpetuate any sorority girl stereotype, but rather, we were asking our participants about aspects of their individual lived experiences as women from sororities,” the statement read. “A majority of the questions in the video were kept open-ended, allowing participants to answer them in whatever way they wanted.”

According to ThePlug, the questions asked in the video “were collectively curated by a team of 4 men and 3 women,” and participants were able to review the video before it went live. “No concerns regarding misogyny were brought to us during or before this process,” the group wrote.

Avantika, a former sorority woman and a former creative director at ThePlug who requested to have her last name omitted, worked on the video before she left the organization recently to focus on her master’s degree.

She emphasized to The Ubyssey that she never saw the final draft and was not involved in approving the video for release, as she had already left.

“[Unplugged] at its conception was just about highlighting different groups at UBC and giving them a chance to answer some questions,” she said of the series.

Avantika was originally part of the video, but pulled out because she was concerned about the direction the video was going in.

“I saw the first draft … and I was like, ‘Oh, I don’t want to be a part of this video ... because I don’t think it’s showing my sorority in the best light,’” she said.

While ThePlug representatives said they were aware of concerns from UBC Sororities shortly after they posted the video, they didn’t take down the video as per a “collective decision” and a Instagram poll posted on the evening of June 11 in which ThePlug said 500 people voted that they should keep the video up, while under 100 said they should take it down. ThePlug eventually took down the video for harassment reasons.

ThePlug also questioned the backlash against them and participants of the video.

“This video, and what followed online, opens up a larger conversation about why sorority members are barred, discouraged, and silenced from discussing partying, drinking, sex, etc,” they wrote. “If it's to protect them from possible assault/harm, then why are we equating silence to self-defence? If it's about playing to harmful stereotypes, then we ask why is talking about these topics considered negative?”

Arreza and Syed expressed concern that ThePlug was deleting comments on the Instagram post. Syed said a few of her own were deleted.

ThePlug told The Ubyssey that the team only deleted three comments. “The first comment, which was also the first comment in the series of comments that were to come, was taken down due to an infringement of personal privacy. The latter two were deleted due to it clearly being a spam account that was wrongfully using our branding.”

AMS President caught up in the criticism

AMS President Cole Evans also received criticism for commenting on the Instagram post of the video and for Nanayakkara insinuating in a message that Evans would consider de-constituting UBC Sororities if the women in the videos were punished. 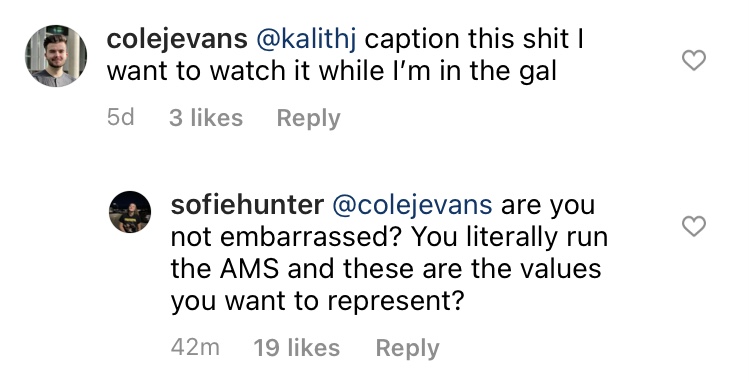 On the now-deleted Instagram post and in an interview with The Ubyssey, Sofie Hunter Linneberg, a recently-graduated political science student and former sorority member criticized Evans for his comment.

Linneberg said his comment seemed to be “supportive and approving … of this video and what the video represents.”

“I think that's a huge problem for someone who is supposed to be representative of the student body, and ultimately, the institution. Half the institution is women,” she added.

Evans said that his comment was made before watching the video and confirmed that he had no financial interest or involvement with ThePlug.

In a Facebook message obtained by The Ubyssey, Nanayakkara appeared to write to those involved in the video, “If anyone here is punished or penalized for this, 1. I believe this is wrong and will be sure that local media is aware of this, and 2. The AMS president said that if anyone is penalized, the AMS will consider de-constituting UBC Sororities like they did with the IFC.” 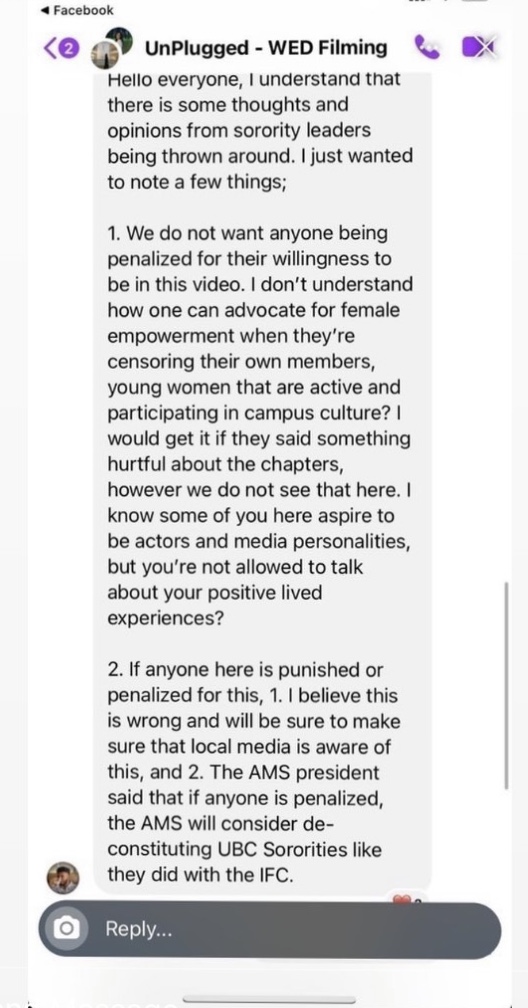 Nanayakkara's message to team members about the video. Screenshot from Facebook

Under AMS Code, AMS Council, on recommendation of the Operations Committee, can de-constitute constituent organizations such as UBC sororities. Council removed the Interfraternity Council’s club status in 2019.

In an interview with The Ubyssey, Evans said he had heard concerns that members of UBC sororities would be penalized for appearing in the video.

“I had stated to Kalith that as under AMS policy, if there was disciplinary action taken that was outside the scope of AMS policy that could subject UBC sororities to review which could lead to a de-constitution. And that would be the same for any other club, if they're in violation of our policies,” he said.

ThePlug confirmed that the conversation happened between Evans and Nanayakkara at the Gallery on June 11, but that no further conversations between the two on this topic occurred.

Arrezza, Banuta and Syed all emphasized that they don’t blame the women involved in the video — as the questions were written by ThePlug.

As of publishing, the video has been deleted, something both Arreza and Banuta had pushed for in interviews with The Ubyssey. They said an apology in which ThePlug recognizes what harm was done would be a good step. Arreza suggested that ThePlug might also do a new video, highlighting the accomplishments of women in sororities.

ThePlug’s statement did not include an apology or indicate any plans to create a new video.

Syed said taking the video down was a good step, but criticized the time it took to do so.

“It took six days and [many] different people interacting with this video for them [to take it down],” she said. ”This [video] … completely just goes against what UBC Sororities stand for.”

Nanayakkara is a member of the Ubyssey Publications Society Board of Directors. The board has no say over The Ubyssey’s editorial operations.