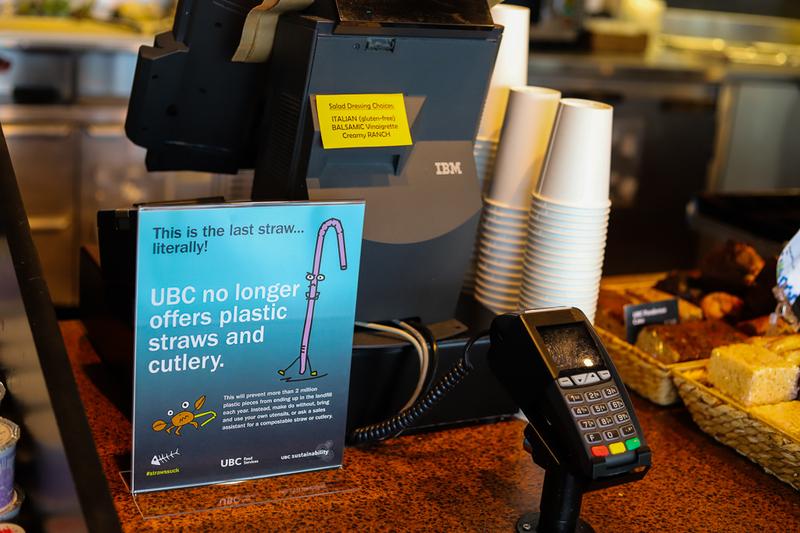 “For people with mobility issues of any kind, there are absolutely straws available for them.” Alex Nguyen

On August 1, UBC Food Services launched the “Straws Suck” campaign to eliminate single-use plastic straws and cutlery from all residence dining halls and food establishments owned and operated by the service.

The removal aligns with Vancouver city council’s decision to ban plastic straws from food establishments with city licenses by Fall 2019. This decision is also meant to help UBC become a “zero waste, sustainable campus community,” as it cuts over two million pieces of plastic cutlery and straws from the university’s waste stream each year.

To replace them, UBC recommends community members to carry their own reusable utensils. Compostable cutlery and bendable paper straws — which UBC took four months to develop — are available, but they will only be made available on request or for necessary usage, such as for people with disabilities.

“We’re hoping that most people don’t need a straw and so we’re not offering them as widely as we did before,” said Victoria Wakefield, purchasing manager of UBC Student Housing and Hospitality Services.

“For people with mobility issues of any kind, there are absolutely straws available for them.”

Is the alternative accessible?

But alternative proposals to single-use plastic straw and cutlery have raised accessibility concerns, especially for people with disabilities.

According to a number of infographics cited by disability rights advocates, plastic is the most accommodating material. Paper — even after being made bendable — could still be unsafe when used in high temperature, or as a choking hazard since it dissolves after a period of time.

Types of reusable straws and risks they pose for a variety of disabled people. #strawban

According to Wakefield, the campaign consulted with the UBC Hospital as well as Access and Diversity, which noted the importance of the paper straw’s ability to bend. She also pointed out that for some people with severe disabilities, they already “come self-prepared.”

“We were also told, you know, that people with severe mobility issues come prepared and have their own hardware,” Wakefield said.

“So absolutely we did consulting and we have the bendy paper straw that holds up and we’re absolutely open to feedback.”

We have replaced plastic straws and cutlery with compostable versions – not banned all single-use straws and cutlery. The straw is bendable and accessible to persons with disabilities. If you have feedback, I invite you to submit it here: https://t.co/2gisTwTpCK

Loo reiterated the importance of having options for people with disabilities given some of paper’s drawbacks, but also expressed interest in testing out UBC’s bendable paper straws.

“I think the overall concern right now is getting alternatives for [people with disabilities] and making sure [the new straws] are something that they can use and is workable with whatever disability they may have,” she said.

“I think people with disabilities will importantly have to give it try and try it out for themselves.”

“Just one little step in the right direction”

The campaign is currently limited to UBC Food Services. Other private suppliers on campus are not affected by Vancouver’s ban, as the University Endowment Lands are out of the city’s jurisdiction.

But Wakefield hopes this move will inspire others to follow suit, expressing hope that this campaign could lead to more plastic reduction across campus such as with plastic bags. She also noted that UBC Food Services will be rolling out more advertisements for “Straws Suck” in the coming months.

“We ask the UBC community to roll along with us and help us do better,” she said.

“We’ve got 700 front-end staff that are engaged in the campaign and we’re educating them as we go so we hope the university supports us in reducing plastic waste.”

The AMS — which is also outside of this campaign — has approved a new external policy on environmental advocacy at its August 1 Council meeting, which also partly focuses on “zero waste advocacy.”

However, there is the debate about whether this initiative to cut single-use plastic straw and cutlery is enough to make a tangible improvement.

“Plastic straw makes up a tiny little portion of our total oil consumption but get magnified by the media as if it is the key to save the environment,” commented user rollingOak in a r/UBC thread about Vancouver’s plastic straw ban.

Other users pointed out that these initiatives are a part of changing the consumption pattern, despite not making a big impact overall. Wakefield likewise acknowledged that UBC’s initiative is just the first step.

“I don’t think [the impact] will be huge,” she said, “just one little step in the right direction.”