UBC students, faculty and staff joined climate strikers across the country on Friday as they gathered outside the Alumni Centre to protest for climate justice. Zubair Hirji

UBC students, faculty and staff joined climate strikers across the country on Friday as they gathered outside the Alumni Centre to protest for climate justice.

At 11 a.m., student climate action groups including UBCC350, the UBC Social Justice Centre, Our Time, the Climate Hub and others led a strike that featured speakers, slam poets and musical acts.

Chants of “We won’t rest until UBC divests” and “Green New Deal and migrant rights. Youth will rise, climate strike” rang throughout the plaza as people of all ages and backgrounds demonstrated with posters and costumes.

Recent UBC alumna Adriana Laurent Seibt spoke to the crowd about her first-hand experience witnessing the effects of the climate crisis in her home country of Honduras.

“I remember when I was growing up I had the beautiful coral reefs right in my backyard. I remember having family trips to the Caribbean islands and the coral reefs were such an important part of my childhood,” she said.

“Over the years, climate change has seriously damaged this fragile ecosystem and the livelihoods of the people who depend on it.” 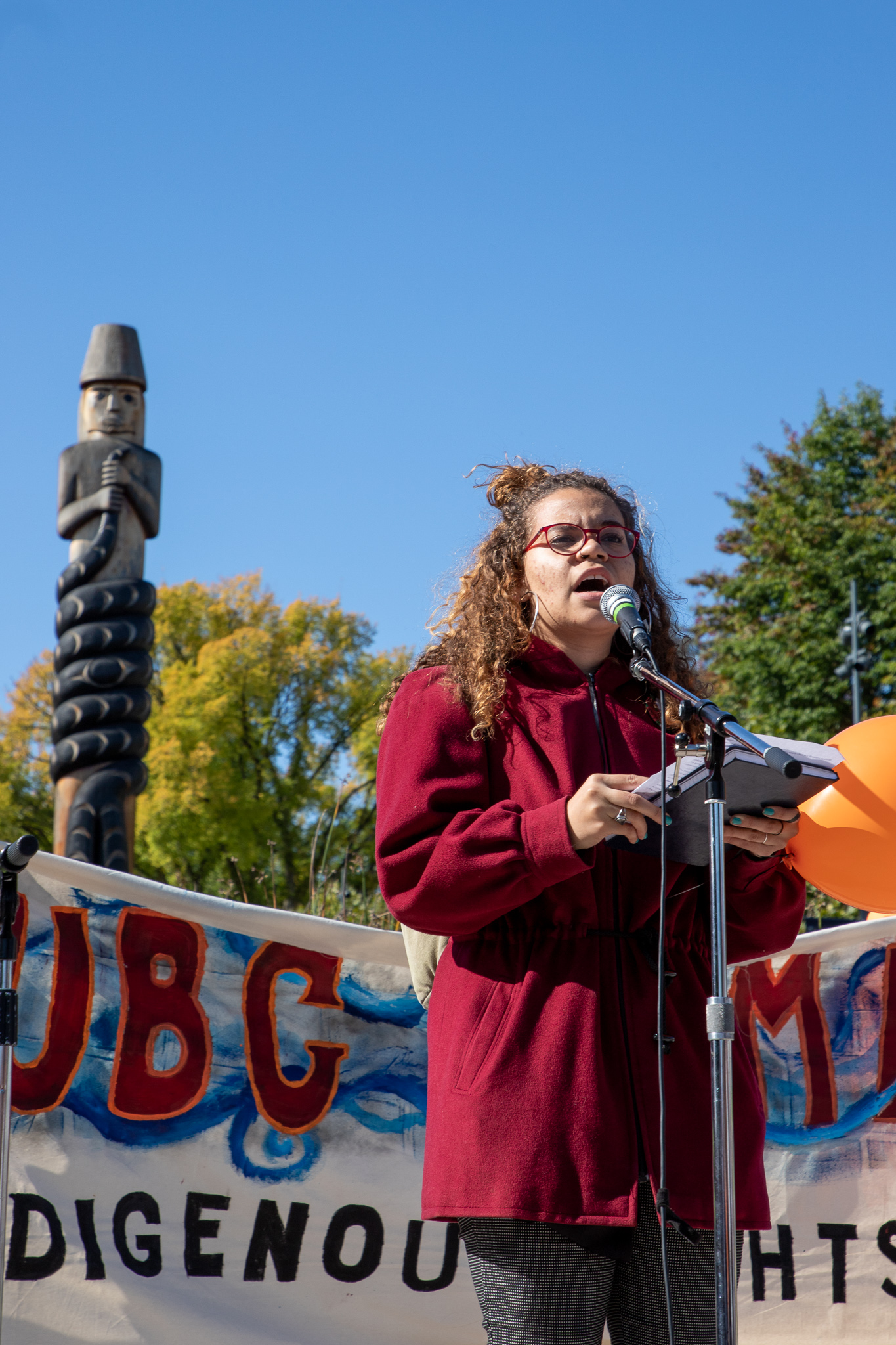 Dr. Sarah Hunt, a member of the Kwagu’ł First Nation and an associate geography professor in the Institute for Critical Indigenous Studies, also delivered a speech.

“Climate change is not happening because of the sudden creation of new ideologies but because of a continuation, an intensification of colonial ideologies which have been ravaging our people and our lands and waters for hundreds of years,” she said.

Hunt added that she hopes to see substantial, long-term climate action even after the strike today.

The time for action

Long-term climate justice was a major theme at the strike as speakers and strikers alike addressed the disproportionate effects of climate change on marginalized groups.

UBCC350 and the Social Justice Centre worked to highlight the importance of intersectionality in the climate movement leading up to the strike. The groups painted the Cairn on Wednesday evening with a message that read “climate racial migrant gender labour Indigenous justice,” but it was swiftly taken down by Building Operations.

“We need to embed justice, empathy, community and solidarity into the climate action movement,” said Laurent Seibt in her speech.

“The motto for the strike is: to change everything, we need everyone. And, we mean every single word … We need more friends, more siblings, more parents, more classmates, more teachers and more professors.”

Mechanical engineering professor Dr. Sheldon Green, alongside several colleagues from the engineering department, dressed in academic robes to represent faculty support for the climate strike, a tradition that Green said began at protests against apartheid in the ’80s and ’90s.

“I thought the analogy was kind of appropriate,” he said. “There’s always climate injustice going on and I think faculty members have a moral obligation to support people who are opposed to climate injustice.”

He added that Canada’s leaders need to step up on the issue of the climate crisis.

“I’m old enough to have seen a lot of nonsense in my day and what I see currently is many leaders who just aren’t willing to make the effort to do something constructive and real about what has been a true climate emergency,” said Green.

Cate May Burton, a doctorate student in education, said she does her part in raising awareness about climate justice by talking to people about it both online and offline.

“I’ve been concerned about climate change since I was the age of some of the younger kids that are coming up now and I think it’s really important that we support them and empower them to raise their voices,” she said.

First-year student Natalie El-Bittar was heartened by the turnout of international students like herself.

“For most of [my friends with me today], we come from Arab countries. So for us, climate change isn’t really advocated for there. So, it’s one of the first times we have the opportunity to actually speak out about this and … we wanted to speak up and finally use our voices for this cause,” said El-Bittar.

“Looking at how many people actually showed up internationally really shows how big the problem is, and it’s not just a local thing. It really shows the magnitude of the issue and how fast we have to act.”

Though it was planned to take place in the plaza outside the Nest, organizers had to find a new space because tents were still standing from the Harvest Festival event that took place the night before. Instead, the organizing groups set up on University Boulevard, using the seating platform in front of the Musqueam Welcome Post as a stage.

UBCC350 said they were in touch with UBC about the booking conflict and held “no ill feelings.” The university delayed taking down the tents so that moving trucks wouldn’t interfere with the strikes.

Despite the location change, UBCC350 estimates between 4,000 and 5,000 students showed up. AMS President Chris Hakim said the large turnout speaks to the demand for prioritizing climate change in both federal and UBC politics.

“The AMS is very excited to see the amazing amount of students, faculty and staff coming out here and really showing that the university, as well as our politicians, need to be emphasizing climate change in our upcoming work around our federal election and our decisions with the Board [of Governors],” he said. 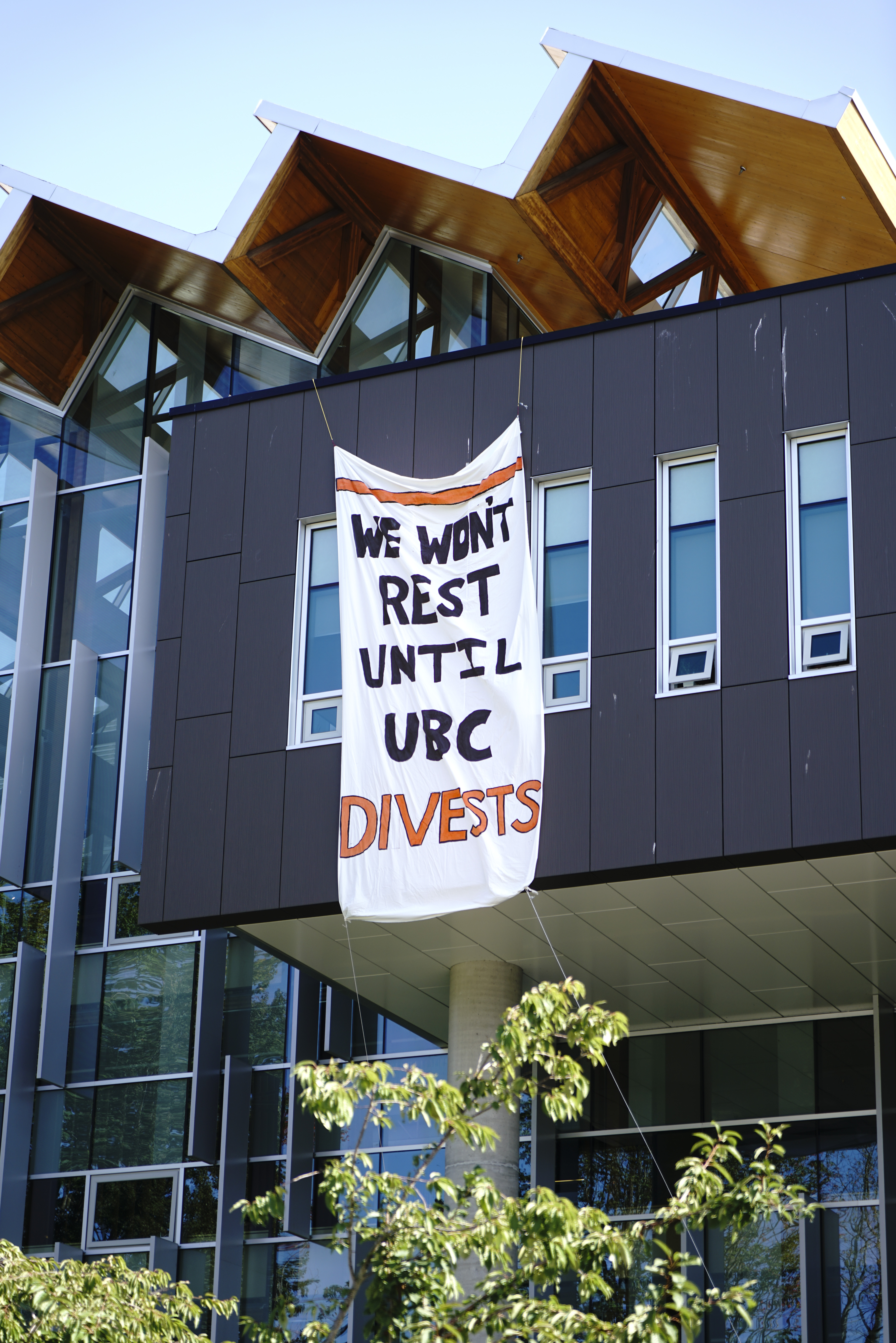 Climate Stike participants hang a banner over the Nest calling on UBC to divest from fossil fuels. Elizabeth Wang

Our Time, one of the organizing groups, noted that the purpose of the rally was to signal to governments the responsibility they have in prioritizing climate justice.

“We ultimately seek that our government — whether that be provincial, municipal or even federal — actually work towards drastic structural changes, which is what the Green New Deal is,” said Rajdeep Dhaliwal, a media liaison for the Vancouver chapter of Our Time. “We want them to act now, not anytime in the future — now. Because we’re running out of time.”

Dhaliwal emphasized that the climate crisis is first and foremost a social justice issue because it’s the underprivileged who stand to lose the most from environmental destruction.

“I think it’s important for everybody to recognize that [it’s a social justice issue] because … you know, I grew up here [in Metro Vancouver] and I don’t feel the effects of climate change. My backyard isn’t actually burning. My water isn’t polluted. My air is still breathable,” she said.

“So, because of that, I have an immense amount of privilege as opposed to people who are actually living on the front lines — they tend to be seen as sacrificial people.”

At around 12.30 p.m. crowds dispersed to join the city-wide Climate Strike at the Vancouver City Hall, which brought traffic to a standstill and drew an estimated 80,000 protesters.

—with files from Henry Anderson